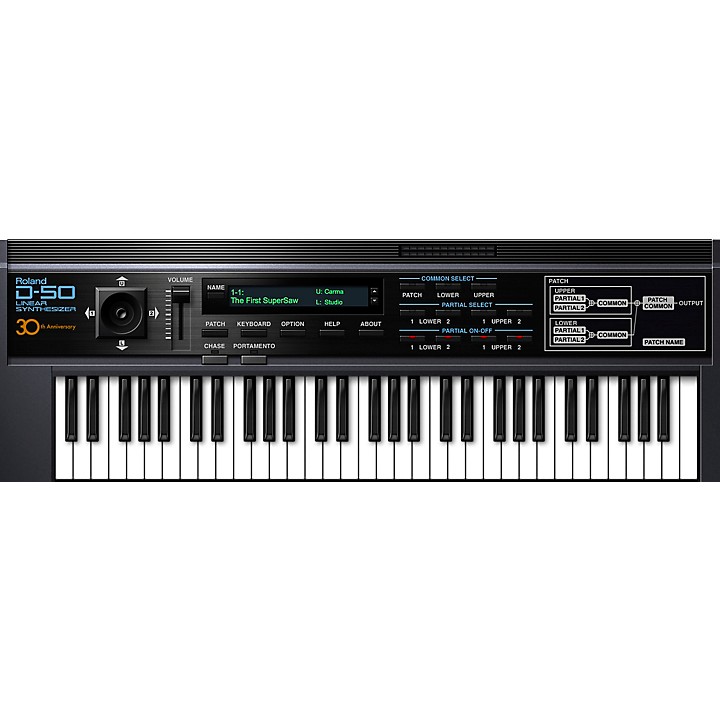 Note: This D-50 Software Synthesizer version is a download only.

The D-50 completely changed the synth landscape when it was released in 1987. Powered by Roland’s groundbreaking LA (Linear Arithmetic) synthesis engine, the instrument’s potent mixture of samples, virtual analog and integrated effects allowed programmers to produce all manner of stunning sounds never heard before. The D-50 Software Synthesizer is a perfect sonic recreation of the original in every way, allowing you to bring this giant in music history into your everyday music production environment.

The D-50 was Roland’s first fully digital synthesizer, and its unique sound combined subtractive synthesis with harmonically complex sampled waveforms and digital effects. This innovative marriage of samples and synthesis allowed for warm and dynamic analog tonality with the realism and flexibility of digital technology, opening up an entirely new world of sound creation possibilities.

New Wave, New Jack, New Age and So On…

The 1980s were a dynamic period for pop music, and new genres were being forged at a furious pace. Name a famous track from the late ‘80s to early ‘90s, and there’s a good chance it was built around one or more D-50 sounds. It’s the basis of classic tracks in a wide range of genres including synth pop, new wave, new jack swing and R&B, plus new age music and countless film scores. In fact, some of the most influential recording artists in history have used the synth’s beautifully crafted presets as the cornerstone of huge international hits.

The plug-in version of the D-50 is the only authentic software reproduction of the Roland hardware unit. It includes the same sampled waveform set, and Roland's Digital Circuit Behavior modeling technology captures every nuance of the original, right down to the archetypal "overtone noise" that lends this synth its rich character. They've even included the proprietary joystick and original iconic presets. But this version of the D-50 also includes extra features that make it a unique and powerful tool for modern productions:

• A virtual PG-1000 controller (based on the optional hardware controller available for the original D-50) greatly simplifies sound design, allowing you to customize preset sounds and build unique voices from scratch

There are several ways to integrate the D-50 Software Synthesizer with other Roland hardware. Import SysEx files from an original D-50 or legacy third-party libraries and enjoy your favorite previously created patches. You can also swap patches and banks with your Roland Boutique D-05 synthesizer, and use its interface to control the plug-in.

Join Roland Cloud today to explore the distinctive appeal of the D-50. And if you like the D-50, check out our software version of the JV-1080 sound module and unlock more sounds used in some of the greatest songs of all time.