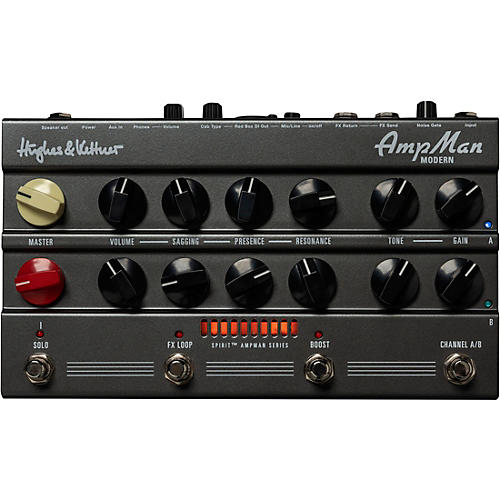 Did you know we'll buy your used and vintage gear?

Hughes & Kettner’s all-analog Spirit Tone Generator is now available in a compact pedal format. AmpMan Modern´s two distinctive channels each embody an entire era of legendary guitar tones, served up by the built-in 50-watt power amp or the integrated Red Box AE+. With connoisseur tone-shaping capabilities, impressive power and a comprehensive set of professional features in a handsome little box, AmpMan is the go-to solution on stage, at home and in the studio.

Making the most of ever square meter inside the chassis, AmpMan is as small as it needs to be yet big enough to hold a treasure-trove of tech, features and sound. On top of that, it’s a real powerhouse with plenty of juice to rock even a 4×12″ speaker cab. All that musical might comes courtesy of the specially developed Ultra Response power amp. Cranking out up to 50 watts of deliciously dynamic power, its punch and feel rivals that of any similarly rated tube power amp. It sends every single watt to the speaker with that spine-tingling dynamic response intact and translated into impressive sound pressure. And the Ultra Response power amp stays true to its musical character even at an all-out roar.

For almost 40 years, we’ve been exploring the origin of the tonal magic of tube amplifiers more and more deeply. And what became obvious is this: it’s about way more than just the tube. The true tonal magic emerges from all the ‘weird’ dynamic interactions between the single circuit sections and the amp stages, the transformers and the speakers.Together, these highly complex and dynamic physical phenomena create that rich, organic and tactile sound experience guitar players are looking for.

The Spirit Tone Generator technology faithfully recreates the natural yet wildly complex interactions of traditional tube amp circuits in a ‘bionic’ way. This miniature masterpiece distills the essence of tube amp physics, with all of the intensity and responsive tonal behaviour, into a compact, strictly analog circuit that promises unbridled playing pleasure.

The Spirit Tone Generator lets you dial in power amp saturation as easily and effectively as on a conventional amp, but in a far more manageable way. That makes it a creative sound-shaping tool to rival any gain knob. Best of all, it does this at any volume level. The Sagging knob affords you instant access to the stuff of legends–that is, to the sound of a cranked amp on the verge of meltdown; to that magical energy that can not only be heard, but also felt. A sensitive tool, this control dials in everything from totally dry to heavily compressed and all points in between.

AmpMan features two fully independent channels with dedicated Gain, Tone, Resonance, Presence, Sagging and Volume controls and pre-gain Boost fine-tuned for that channel. This means you don’t have to entertain any compromises when voicing channels and setting volume levels. Total tonal freedom is within easy reach! And you can let that freedom ring loud and clear with the nifty Solo function. With this special feature, AmpMan not only strikes the right tone; it does so at the right volume. The built-in footswitches select channels and activate Boost, the FX Loop and the Solo function. If you wish, AmpMan can even recall your Solo, Boost and FX Loop settings when you switch channels.

Channel 1 is identical to its counterpart on AmpMan Classic. It serves up a sensuous experience in sound with all the immediacy and liveliness of single-channel amps with no master knob. These are the iconic sounds of the ‘60s and early ‘70s pioneered by the rebels who created the blueprint for rockin’ tone. This channel’s hallmarks are its wide dynamic range and touch-sensitive response to your phrasing. Roll back the Gain and Sagging knobs, and it delivers crystal-clear, sparkling clean sounds. Set the Sagging knob to 12 o’clock or so, and it breaks up just like the tube amps of yore to produce warm, woolly distortion replete with rich overtones. Hit the Boost button, and it pumps out the thrilling sound of a fully cranked tube amp with an upstream booster.

Channel 2 is your stairway to high-gain heaven. Its Tone, Presence and Resonance knobs take you on a tour of entire genres of metal, from that classic macho midrange to modern scooped sounds. The Sagging knob greases the gears so that tone flies from your fingertips with endless sustain and the kind of creamy overtones that let lead lines soar. Riffing requires the opposite, tighter tone and hair-trigger response. Roll back the Sagging knob, and the power amp responds ultra fast. The tipping point into compression comes very late, even when playing chords in drop tuning.Tapping suddenly seems effortless.

AmpMan makes no compromises when it comes to tone, and the same goes for its feature set. Whatever use case you have in mind – as a standalone amp, as your pedal board’s sound hub, for practicing at home or for recording in the studio – AmpMan sports the right connectors for every scenario.

The boss on the pedal board …

Rather than a three-band EQ section, AmpMan’s preamp sports one exceedingly effective sound-shaping tool for each channel: That Tone knob dials in everything from British to Californian flavors, all the shadings in between, and lots of other sounds beyond that. The Resonance, Presence and Sagging knobs shape the power amp’s tone. This combination of controls makes AmpMan so phenomenally flexible. It lets you tweak and enrich your pedals’ signals with preamp and power amp voicing options to bring out the best in your upstream stompboxes.

The footswitchable, serial FX loop is available for inserting reverb and delay effects. The built-in noise gate engages before the signal hits the FX Send so reverb tails fade and delays decay naturally. In-ear monitoring is an exercise in convenience with the Red Box AE+ and its eight painstakingly selected speaker models. The Red Box, adjustable Phones output and Stereo Aux In provide a self-sufficient, professional-grade monitoring option with no outboard gear needed. All you have to do is blend the stage mix in with the headphones signal.

… And in the studio
Able to deliver big sound in a professional studio or even with the smallest recording setup, AmpMan is your trusty tone-sculpting sidekick – no cab or microphone needed.

The balanced Red Box DI Out delivers top-drawer signal with or without cabinet emulation. Use any of the Red Box’s eight cabinet models or send the Spirit Tone generator’s unfiltered, purely analog signal to your DAW to take advantage of all the perks of the digital world – speaker emulations, mic modeling, room simulations, effects, and any other signal processor that strikes your fancy. But whatever way you choose to go, rest assured that inspiring, spine-tingling sound is always within easy reach.

Red box – the industry standard since 1989

In April 1988, the German Patent Office granted a patent for a Hughes & Kettner invention that would change the way amps’ sound is captured on stage and in the studio. A simple yet ingenious alternative to mic’ing speakers, the idea was to tap the signal between the amp and cabinet, filter it, and patch it out via a balanced XLR out to provide a signal suitable for every use case.