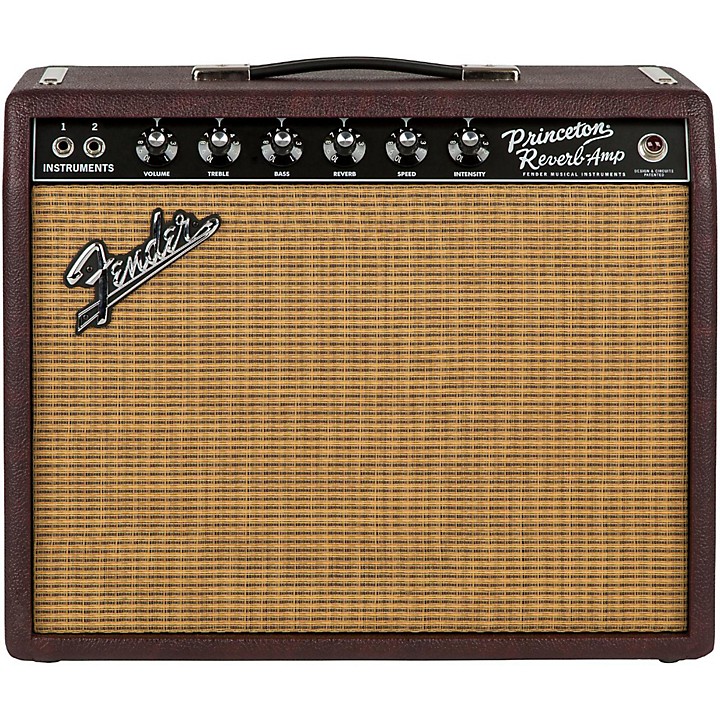 In the pantheon of great amps, there are few that stand the test of time like the Fender Princeton and its signature clean tones. There’s that long, luscious spring reverb that lets players dial in everything from ethereal echoes to cavernous swirls. There’s that recognizable Princeton tremolo, which pulses with pure Fender character through every passage and performance. And then there’s the unmistakable tonal character that only a Princeton can offer; growling lows, shimmering highs and the classic breakup of the 6V6 tubes and 10" speaker when pushed to the brink.

The Princeton, in its most classic form, has been revered as a stage and studio must-have, and its presence on the most famous albums and riveting stage shows of all time further substantiates that claim. Clearly, its rich tone and responsiveness have given it an unmistakable voice. Fender’s latest partnership with Musician’s Friend and Guitar Center, however, proves that even the most perfect amplifier has room for modification.

That updated collaboration—the Fender Limited-Edition '65 Princeton 112 Bordeaux Reserve—ups the ante on the tone box that made its way in to the living rooms, studios and stages of Fender lovers. It incorporates one of the most popular Princeton mods—the inclusion of a larger, 12" Jensen P12Q speaker—allowing for a fuller frequency response, a perceived volume boost and clearer midrange. The exciting effort is an extension of Princeton legacy that, literally and figuratively, has been simply unheard of outside of the garages and tool benches of gearhounds and mod addicts.

“We wanted to do something different for Fender fans that they haven’t seen or heard before,” said Rick Heins, Fender product development manager for amplifiers. With its stellar combination of new features, striking good looks and improved full-frequency response, the Limited-Edition '65 Princeton 112 Bordeaux Reserve delivers on that promise without sacrificing the signature sound of the amp prized and recognized for well more than a half-century.

The relationship between classic Fender amps and Jensen speakers has long existed, and they’ve long been part of the recipe that results in those beloved tones. But true to its namesake, the switch from 10" to 12" speaker serves up a little something extra for tone chasers—crystal clear wine glass fidelity with plenty of low-end punch and attitude when cranked—a slight differentiation from the tonal quality of the famous Princeton.

The Limited Edition Princeton 112 Bordeaux Reserve is a drool-worthy collectable for the discerning amp enthusiast seeking a cosmetically unique amp as well. Also in line with its moniker, the Bordeaux Reserve features a classy yet understated wine red textured vinyl covering and, paired with traditional wheat-colored grille cloth, offers an air of sophistication that only a Fender Princeton can exude.

The Bordeaux Reserve is available exclusively at select Guitar Center locations as well as MusiciansFriend.com and GuitarCenter.com.