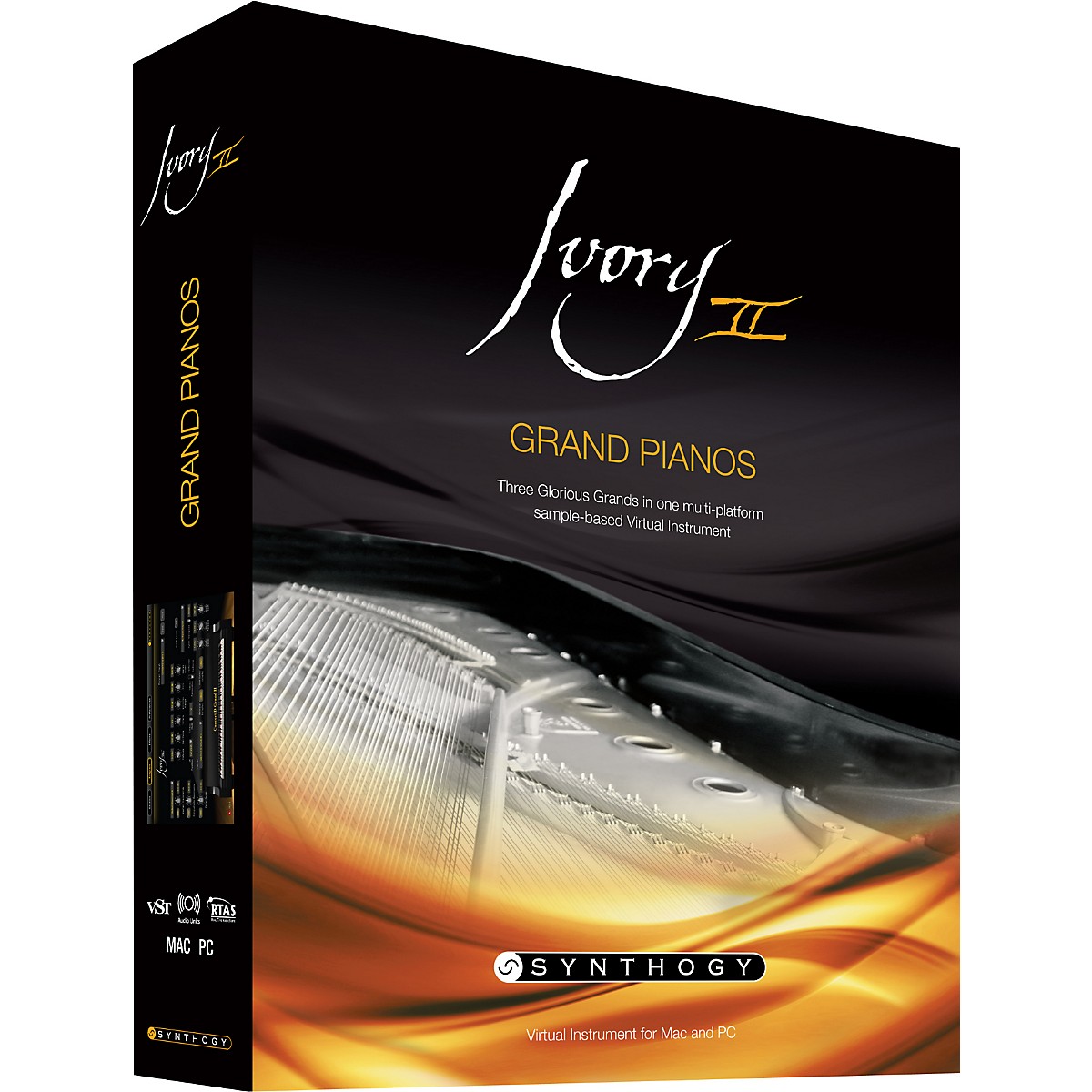 Ivory II Grand Pianos is the next generation of Ivory piano products by Synthogy. Powered by a new custom engine, the entire line of Ivory virtual pianos features groundbreaking technology, a fresh graphic interface, and further expanded piano sample sets to provide performers and producers with more expressive detail than ever. A host of new piano...  Click To Read More About This Product

Ivory II Grand Pianos is the next generation of Ivory piano products by Synthogy. Powered by a new custom engine, the entire line of Ivory virtual pianos features groundbreaking technology, a fresh graphic interface, and further expanded piano sample sets to provide performers and producers with more expressive detail than ever.

A host of new piano-centric features have been added to the Ivory II engine. Principal among them is Sympathetic String Resonance, a long sought after but elusive characteristic of real pianos that Synthogy approaches in a completely unique way, realizing the true complexities and subtleties of sympathetic string excitation. This brand new technology does not rely upon triggering additional samples, ordinary sine waves, or recordings in any way. Rather, notes struck that are harmonically related excite the actual complex overtones of the notes that are being held, in the same manner that undamped strings ring in a real acoustic piano. The result is an unprecedented new level of realism.

At the heart of Ivory II are Ivory's legendary pianos. Each Ivory piano, in every Ivory product, has been further refined and developed, including expanded velocity levels (up to 18 per piano), additional soft pedal samples, and more release samples. Synthogy's decades of expertise in piano development, along with proprietary "timbre interpolation" technology combine to deliver greater fidelity, a high-level of playability, and a musical experience like no other.

What's new in Ivory II?
Synthogy listens to its customers, and has continually updated its Ivory products to meet their expectations. With the Ivory II generation of products, Synthogy exceeds those expectations with exclusive technologies no other virtual piano company can match.

Sympathetic String Vibration is what occurs in real pianos when the harmonics of an undamped string are excited and resonate with the energy produced by striking another key. Importantly, those harmonics only sound when the struck key is harmonically related in pitch, which is why people say the undamped string vibrates or resonates in 'sympathy'. It is a complex phenomenon in acoustic pianos that has long been sought after by digital piano emulations. Realistic recreations of both the sound and the behavior of Sympathetic String Resonance have proved elusive for the virtual world until now.

Synthogy's Harmonic Resonance Modeling technology represents a true breakthrough for realistic Sympathetic String Resonance in a virtual piano. Harmonic Resonance Modeling is not based on sampling, but rather on a new DSP technology that excites the harmonics of the held, undamped notes, just as in a real piano. Only notes struck that are harmonically related will cause the notes held to ring in sympathy, and because the actual harmonics of the notes held are being excited, the sound and imaging are completely natural. Additionally, the amount of harmonic ringing also varies naturally with the dynamics of your playing; strike a note harder and overtones on the held notes ring louder. Striking a different note that is harmonically related will excite different overtones in the same held note. Ivory II's Sympathetic Resonance feature brings our virtual pianos to life in a whole new way, as expressive and interactive as the real thing.

Another major enhancement to Ivory II is the greatly expanded Sound Library. Starting from the foundation of Synthogy's world-class sample recordings, each of Ivory's pianos has been expanded to include up to 18 velocity levels. These new velocity levels are further enhanced through the use of our exclusive Advanced Timbre Interpolation technology, for ultra smooth velocity response and unsurpassed playability.

In addition to the held samples, Ivory II provides an enhanced set of Release Samples for each key. These Release Samples were originally recorded to respond to both velocity and note duration, and Ivory's engine triggers them in the same way. The result is the most natural and realistic key release whether the note is staccato, or held for any length of time during the tone's decay.

Lid Position is a new feature to the Program page that emulates various positions that a grand piano's lid may be set to, from fully open, half stick, to fully closed, and other positions as well. For Ivory II Upright Pianos, a different set of lid positions is included to address the various lid or front cover options available on vertical pianos.

The Ivory II engine also includes powerful sound shaping features such as Timbre Shifting, and Parametric EQ. Timbre Shifting opens up a whole new sonic palette by allowing you to borrow the timbre of a different note, without actually changing its pitch. The Parametric EQ has been added to the EQ section of our Effects page. With an adjustable center frequency, Q and gain, the Para EQ provides greater control and flexibility to tweak your piano sound to your taste, or to your mix.

New Session features have also been added, such as Tuning Tables and Silent Key Velocity. Tuning tables gives you the ability to create and save alternative tunings for your pianos. Silent Key Velocity allows you to set a threshold under which a sound will not be triggered by your keyboard controller. This is to emulate the action of a real piano, which will not trigger a hammer strike at the softest velocity. Silent Key Velocity can also be used to explore Synthogy's Sympathetic String Vibration technology, by holding down silent keys and exciting their harmonics with other key strikes, a technique that began to appear in modern music of the 20th century.

For popular music production, Ivory II offers new enhancements to the Synth Layer feature. Several new Synth pad sounds have been added to layer with your pianos, or to play by themselves. In addition, the Synth Layer section of the Program page now offers new ways to shape the sound of those synth pads with the Synth Decay and Synth Release controls.

All of these features and more in Ivory II are now supported with a new Graphical User Interface. While maintaining the look, feel, and familiarity of our original Ivory interface, the new Ivory II interface accommodates all of the new features and makes a few key organization changes to greatly enhance ergonomics. The Session Page replaces the old Velocity Page in the interface. The Session Page now includes all Session parameters, including all of the velocity map parameters that were always a part of the Session presets. You'll also notice a Preferences Page has been added to include user customizable settings, and a Navigation Bar has been added to the top of the interface to quickly and easily move between pages.

All of these new features and more, including every one of Ivory 1.x features are supported in Ivory II. Dozens of new presets are offered that take full advantage of these powerful new enhancements. In addition, all of the Ivory 1.x presets are included. For your older user presets, Ivory II is fully backwards compatible. All of these improvements have been designed and implemented to make Ivory II more flexible, expressive and realistic than ever before.

With Ivory II, Synthogy has rewritten the book on virtual pianos, innovating technologies and tapping their vast experience to create pianos that will impress the most discriminating performer.

In March of 2010, more than 100 music product magazines from all over the world selected Ivory II to win the M.I.P.A. Award in the category of Best Software Instrument.