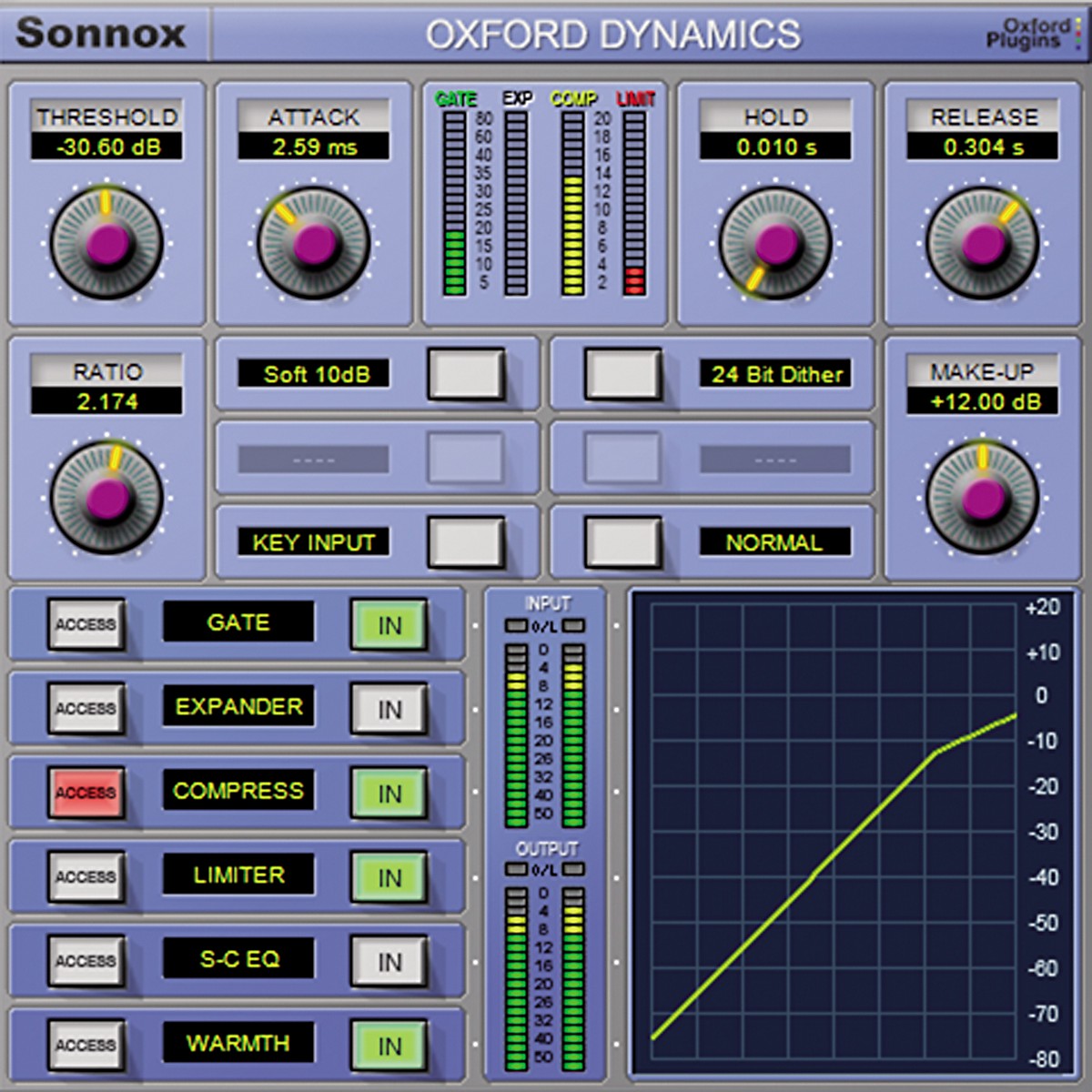 The Sonnox Oxford Dynamics plug-in for Pro Tools HD/HDX Systems is modeled on the extremely flexible and capable unit used in the Sony OXF-R3 professional mixing console. Resulting from many years research into professional dynamics applications, it offers separate Compress, Limit, Expand, Gate and side chain EQ functions, with full independent con...  Click To Read More About This Product

The Sonnox Oxford Dynamics plug-in for Pro Tools HD/HDX Systems is modeled on the extremely flexible and capable unit used in the Sony OXF-R3 professional mixing console. Resulting from many years research into professional dynamics applications, it offers separate Compress, Limit, Expand, Gate and side chain EQ functions, with full independent control of all parameters. Features such as selectable time constant curves and variable soft compress functions allow the user to confidently tackle all common uses of compression, from subtle unobtrusive level control and mastering functions to the production of great artistic effects. The use of a feed-forward architecture with logarithmic side chain processing, making use of look-ahead techniques, ensures exemplary sonic characteristics and dynamic accuracy, with an artistic capability simply unavailable from other single units, analogue or digital. This highly sophisticated and professional product has the power and flexibility to obviate the need for many of the separate applications most users keep for specific uses.

General
The Oxford Dynamics plug-in is a highly sophisticated device with comprehensive control of many parameters. Therefore, to aid operation, there is separate page of controls for each process, since it would not be feasible to have all controls and displays available on a single page.
Although there are four gain level controlling processes, Gate, Expander, Compressor and Limiter in the mono and stereo plug-ins, their control signals are all derived from a single side-chain detector, operating on a single gain control element. The amount of processing necessary to allow a detector for each process would be far too great for current processor capabilities, if done correctly.

Feed-Forward Architecture
The type of architecture in the Oxford Dynamics uses feed-forward techniques. In this case, a tiny delay is introduced into the signal path. (The amount of delay is virtually insignificant, and can be compensated for, in order that all signal paths are aligned, in any case.) This delay allows time for the side-chain control signal to be generated so that it can coincide exactly with the signal it will control. This technique allows very accurate control of the audio levels by generating totally precise control signals, thus preserving audio quality.

Gate
The gate acts like a switch, where signals below the THRESHOLD setting are attenuated, according the the RANGE control setting. This type of function is useful for suppressing unwanted background noises, such as tape hiss, where the wanted signal is well defined. Gates are very useful on drums and percussive instruments too.
Once the signal reaches levels above the THRESHOLD, the gate opens allowing the signal through at full level. When the signal level falls, it must reduce to 4dB below the THRESHOLD before the gate will close again. This is known as 4dB of hysteresis. Increasing the ATTACK time, softens the attack 'edge', and the RELEASE sets the time for the closure take to take place. The HOLD sets the minimum time before the gate is able to close again.

Expander
The expander has all the same controls as the gate with the addition of a RATIO control. But whereas the gate acts like a switch, allowing the full signal through once the THRESHOLD has been reached, the expander allows the signal level to increase, according to the slope of RATIO setting. This function can be used to lower background background noises but is particularly useful for increasing the dynamic attack of any musical instruments which are percussive nature, such as drums, percussion and acoustic guitar.

Compressor
The compressor allows gain reduction to signals beyond the level set by the THRESHOLD according to the RATIO setting. The RATIO can be set anywhere between 1:1, where no compression takes place, and 1000:1 where virtually total limiting takes place, meaning that there is no increase in level whatsoever for signal level beyond the THRESHOLD.

The ATTACK determines how quickly the compression sets in, allowing initial transients to pass, with the longer settings, useful to pass the intial attach of percussive intruments. The RELEASE sets the time taken to recover to no gain reduction, once the signal has returned to a level below the THRESHOLD. The start of the RELEASE phase can be further delayed by increasing the HOLD control.

The transfer curve of the compressor will normally show a corner at the THRESHOLD point, the transition between no gain reduction and gain reduction. This corner can be 'smoothed' using the SOFT function which helps to 'hide' compression.
When compression takes place, the overall signal is reduced at the higher levels, normally requiring the level to be 'made up' again. The MAKE-UP gain control allows for this.

Limiters were originally designed to prevent transmission systems being overloaded but are often used as artistic tools too. The ATTACK, HOLD and RELEASE behave in a similar manner to those of the compressor, but have different ranges.

Warmth
The AMOUNT control allows the addition of harmonically related signal with a tube or electronic valve like characteristics. Signal increases of up to 6dB can be achieved within the audio, but without going over the digital maximum. MAX TRIM allows fine tuning in order to compensate the peak level. The warmth function is indepedent without dependency on other dynamic processes.

Bus Compressor (Pro Tools HD & PowerCore only)
The bus compressor plug-in includes a 5.1 wide compressor and limiter where the sub channel has some additional individual control.
The 5.1 compressor, limiter and warmth sections have exactly the same controls and parameters as the mono and stereo. Additionally for the sub channel, the LP FILTER sets the cut off frequency, the SUB TRIM sets the contribution of the sub signal to the side-chain, and the SUB PASS sets the amount of gain reduction control passed to the sub channel. The 5.1 Buss Compressor does not include gating and and expansion.