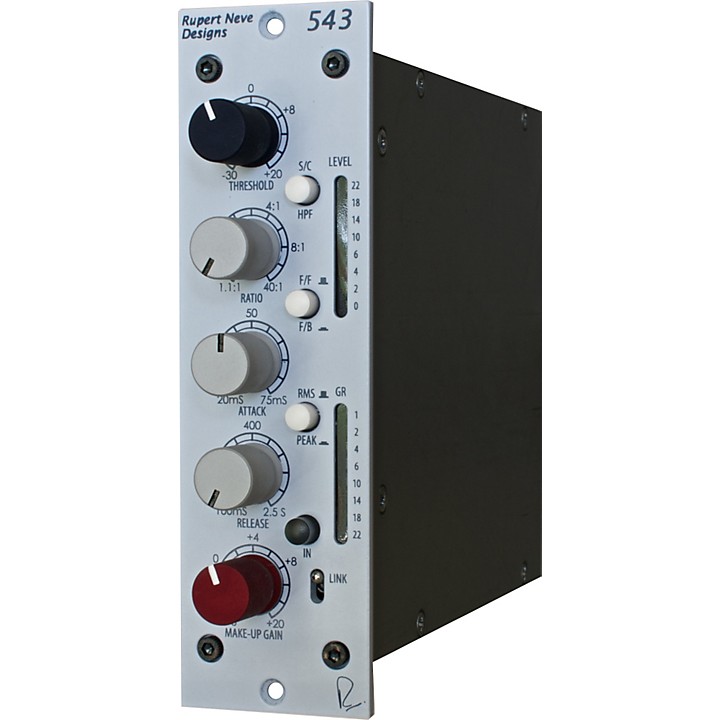 Special order: Place an order for this item today and we’ll get it to you soon.

Notify me when this item is in stock.
Protect your gearLearn more
Cover drops, spills or cracks with Pro Coverage
Hey there. How can we help you out?We're here for your gear needs.
866-498-7882
See All Rupert Neve Designs Compressors & Limiters

The Rupert Neve Designs Portico 543 Mono Compressor delivers the unobtrusive, musical-sounding dynamic control and brick-wall limiting made famous in the Portico 5043 to the 500 series format. The 543 features a fully controllable compressor-limiter with feed-forward / feedback modes, Peak / RMS detection and a built-in sidechain high pass filter. With an unrivaled heritage and a tremendous feature set, the 543 yields a combination of rich warmth, flexibility and precision that is sure to resonate in the ears of sound engineers the world over.

Built around Mr. Rupert Neve's custom transformer designs, each 543 module encompasses individually controllable threshold, attack, release, makeup gain, ratio, side chain HPF, Feed-Forward / Feed-back selection and Peak/RMS detection modes. With the compressor inactive, the 543 may be used as a transformer-coupled, high-performance line amplifier, and two 543 may be linked for stereo operation as well. The chassis is built to standard 500 series specifications, with power and I/O provided by the rack.

How the Compressor Works
In order to control gain, a V.C.A. or Voltage Controlled Amplifier (or Attenuator) is used. There are many types of V.C. including the use of tubes, discrete and integrated solid state circuits, and naturally non-linear devices. Each one has its characteristic behavior that reflects sonically on the final performance, and gives it a character or signature that can be musically attractive or not! The Portico 543 makes use of a very accurate, low-noise, low-distortion V.C.A. having, essentially, no signature of its own.

A part of the audio signal is rectified and smoothed to produce a suitable control voltage for the V.C.A. which has to respond very quickly and have low distortion. If the response is too fast, low frequency signals will themselves, be gain controlled! If the response is too slow, the signal will overshoot and the first few cycles will not get compressed. The speed and accuracy of the response, known as the "attack", and the time frame that gain remains under the initial control, known as "release" or "recovery" and plays a large part in the way a compressor sounds.

Feed-Forward or Feed-Back?
The 543 also has the ability to switch between feed-forward and feed-back modes. If the V.C.A. Control voltage is taken from the 543 output, (i.e. after the V.C.A.) it cannot act immediately on the V.C.A. because it has already been modified by settings of the V.C.A. and circuits through which it has passed. This is known as a "Feed-Back" compressor. The two compression characteristics are quite different; there is more "Overshoot" and both the attack and recovery ramps are changed, providing the user with powerful choices.

In most of Mr. Rupert Neve earliest designs, feed-back detection controlling the VCA with a rectified voltage from the unit output was intrinsic to the musical dynamic response. However, the very nature of a feedback compressor limits the attack time of the compression circuit. To offer faster, more technically accurate response times, feed-forward detection was implemented on Mr. Rupert Neve's more modern designs. With the FF / FB switch, both classic and modern VCA responses are available.

RMS or Peak?
One of the more unique features of the 543 is the new Peak / RMS mode also found in the Portico II Channel. This switch allows the VCA (voltage control amplifier) to respond to both RMS (Root Mean Square) and peak levels. RMS circuits are considered to better mimic the way the ears perceive apparent loudness, while peak circuits tend to directly respond to the waveform voltage which may be more of a concern for prevention of clipping and maximizing levels. In this case, peak mode uses a combination of both methods to get the best of both worlds, and avoids the drawbacks of each method on its own.

Above a given "THRESHOLD" signals are reduced by an adjustable amount ranging from 1:1, (which is linear, or no reduction at all), to more than 40:1 which is a very high ratio, equivalent to that of a Limiter. RATIO is sometimes referred to as "Slope" because when depicted on a graph, the slope of the graph representing Output versus Input, is what changes.

Ratio and Threshold are closely inter-dependent. If a RATIO as high as 40:1 has been set, and if the THRESHOLD is set at 0dBu, even when a massive signal of +40 dBu (unlikely!) is presented to the input, the output signal will only be +1 dBu. RATIOS as high as this would normally be set somewhere above 0dBu - say at +14dBu, in order to prevent the output signal level exceeding just over +14 dBu to protect, for example, a digital recorder. Similarly, if a RATIO of 5:1 has been set, an input signal which is 10dB above THRESHOLD will only rise by 2dB above that THRESHOLD at the output.

THRESHOLD control covers the Range from below -30dB to +22dBu. When THRESHOLD set at a low level, with a fairly high RATIO the amount of gain reduction will be considerable and it may be necessary to use some GAIN after the compressor to restore the apparent signal level.

Attack Time
The ATTACK time is the time taken for the compression circuits to start compressing. A long ATTACK time allows short duration peaks to "escape" and go through uncompressed. This may cause overload on subsequent digital circuits. A very short attack time sounds un-natural and robs the signal of "life" by removing transients. Some transients are extremely fast and have little effect on the sound quality. Setting a long attack time often means that almost no gain reduction occurs because the transient is history (!) before compression has had time to operate. However, even the fastest circuits take time to operate which means that there is always some "Overshoot". Small amounts of "Overshoot" are musically desirable - there are exceptions, of course.

Setting the right values of RELEASE and ATTACK is what compression is all about! Once the principles are understood a Compressor-Limiter such as the 543 provides a powerful tool that actually appears to enhance the dynamic range of a recording and so provide greater musical enjoyment.

Release / Recovery
The notes above explain how the 543 handles signals of constant amplitude such as pure tones. Real program signals, however, are continually changing in level. The way in which a compressor deals with actual program material depends upon the magnitude and duration of peaks in the program level. If the RELEASE TIME is set to be very short, a short duration signal will be compressed but the gain will return to normal very quickly, giving a fluctuating and un-natural sound known as "Pumping" when the background, or other signals, are forced up and down. The gain will also tend to follow the wave form of low frequency signals. RELEASE TIME should be set long enough for the gain to remain reasonably constant between each bass note or between speech syllables.

Gain - GAIN range provided is from -6dB to +20 dB. As already noted, when compression has taken place, it may be necessary to increase the overall gain to restore the apparent program level

Peak - When engaged, the 543 uses a combination of peak and RMS (average) detection to determine level. When disengaged, it follows just RMS.

Side Chain High-Pass Filter - Introduces a HPF at 250Hz to the VCA side chain signal. This allows the compressor to disregard sustained low frequency content.

Stereo Operation - When the LINK switch is engaged on two 543 modules and settings are approximately the same values, GAIN reduction on both channels will be the same to preserve stereo balance and position. This will work properly in link bus-enabled 500 series racks, or by hardwiring two 543 modules link busses together in non-compatible racks.

Ducking - When the LINK switch is engaged on two connected 543 modules, the signal passing through the first module may be used to control the amplitude of a second module. For example, the level of music through channel A can be controlled by speech on channel B, i.e. reducing the music level to make a "voice-over" announcement.

Meters - Two Peak LED METERS are provided that show OUTPUT LEVEL and GAIN REDUCTION. Output level meter covers the range from -10 to +22dBu and above which is regarded as overload. REDUCTION is calibrated in dB covering the range +1 to 22dBu, reading from right to left,
Features
Specifications

Everything You Need to Livestream Your DJ Set

How to Set Up Your First Live DJ Rig