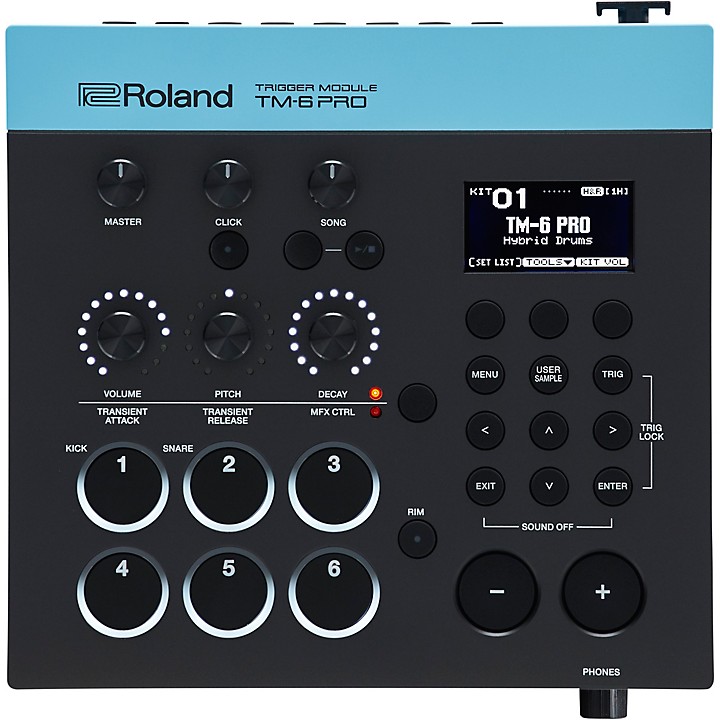 Notify me when this item is in stock.
Protect your gearLearn more
Cover drops, spills or cracks with Pro Coverage
Hey there. How can we help you out?We're here for your gear needs.
866-498-7882
See All Roland Electronic Drum Modules

Life as a working drummer is not without pressure. From one job to the next, you’ll be expected to move fast and find the perfect drum sound, satisfying your audience, fellow musicians, engineers and the all-important paying client. But that’s a big challenge when you’re playing a traditional kit. Acoustics can vary drastically from venue-to-venue. Mixing engineers all take a different approach. You could be presented with unknown material with moments to spare, or asked to replicate the drum sound from a studio recording. Life gets much easier when you add the Roland TM-6 PRO to your favourite acoustic drum kit. Smart, simple and discreet, this new trigger module gives you instant and reliable access to every drum sound in the book, on every stage you play.

Choose the perfect tone for your drumming style from 500 premium sampled sounds
Every drummer feels the pressure when the clock is ticking, the band are waiting and your kit doesn’t sound quite right. The TM-6 PRO lets you walk into any gig and find your sound fast. Designed for hybrid drumming, this trigger module is preloaded with 500 new sampled sounds, from electronic and processed tones to acoustic drum sounds and sound elements. Drummers who dart between jobs can switch between a library of sounds in seconds. Try electronic sounds including fat-synth kick, vintage drum machines, claps and SFX, alongside processed sounds like compressed snares and kicks that cut through onstage. Get the best of the old-school, with exceptional-quality preloaded acoustic drum sounds, recorded at world-renowned studios like Real World and Rockfield. Enhance the attack of your snare and bring low-end power to your kick using sound elements. It’s all at your fingertips.

Bring expression to your playing with onboard V-Drums sounds
As a working drummer, it’s vital that nothing kills your swing. You’ll make yourself even more employable with the TM-6 PRO, which supplements its onboard sound library with a selection of natural and expressive V-Drums sounds. For drummers yet to explore the hybrid concept, this feature is hugely reassuring, letting you use the same playing technique as you would on acoustic drums—even open/closed hi-hat control is possible using the V-Drums sounds and the hi-hat control connector on the module.

Recreate signature drum tones from studio recordings
Whether you’re playing in a covers band or touring with a major artist, pro drummers will often be asked to recreate the signature drum tone from a famous studio recording – and your reputation depends on getting it right. Rely on the TM-6 PRO to nail any tone, thanks to the user sample feature that lets you import the exact sounds from the recorded track via SD card and play them using your acoustic kit. And that’s just the start. When your bandleader asks you for a fresh take, it’s easy to customise those imported audio samples, combining them with the module’s built-in sounds, adding powerful onboard effects or switching and mixing layered samples according to the strength of your stick-hits.

The ambitious first step towards a hybrid kit
As you evolve as a drummer, it’s vital that your kit can grow, too. The TM-6 PRO is the jump-off to an ambitious hybrid kit that could help you win more varied commissions. It’s easier than you think to expand your acoustic kit, simply adding a selection of Roland’s pads, triggers and pedals via the module’s six trigger inputs (max 12 pads with optional Y-cable) – then enjoying a kit that offers swing, style and lightning-fast sound response. For flexibility, the TM-6 PRO’s four direct outputs work as four mono channels or two stereo channels to process the sound individually (it’s also possible to set six mono channels or three stereo channels outputs when you set the main outputs to direct outputs). You could even assign a song track or click track to specific direct outputs. This is your kit – and you’re in charge.

Switch sounds fast in the heat of the gig
Plans can change fast onstage – and that can spell headaches for a drummer playing a traditional kit. With the TM-6 PRO, you can relax and rely on this trigger module’s easy and intuitive operation. Using the front panel’s three Sound Modify knobs, you have fast and flexible editing options (without getting into deep menu editing), directly controlling common parameters like Volume, Pitch and Decay, alongside the variable +/- 2-octave pitch rate that means it’s easy to tune with acoustic drums. If you change the control knob group, then transient attack/release or MFX can be modified using these three knobs. And when you modify the parameters of the 30 MFX types, the most effective parameters for each type are pre-assigned to a knob for intuitive editing. The TM-6 PRO also gives you the edge in the studio, with the newly developed Transient effect that offers flexible control of attack and release. Whatever the musical director demands, you’ll be ready to deliver.

LED indicators give at-a-glance status and complete control
For live drummers, there’s nothing more frustrating than troubleshooting your setup when you should be focused on your performance. In the heat of the gig, the TM-6 PRO gives you all the information you need fast, with LEDs that flash in response to each head/rim of 6- independent triggers, and LED indicators around each sound modify knob that let you know the parameter value at a glance. It’s a reassuring feature that means you’ll feel in complete control of your kit – leaving you free to put your heart into the drumming.

Improve your gigs by playing along with backing audio and click tracks
Backing tracks and click tracks are invaluable to drummers in countless situations, and the TM-6 PRO makes it easy to use them for live work and rehearsal. Backing audio tracks stored on SD card can be played direct from the memory, so you could store a whole song for a live show, or jam along with the set list, whether the band is there or not. When exporting backing tracks from your DAW, create an accompanying click track at the same time. Then, place the backing track and the click track WAVE files on an SD card and they'll play simultaneously and in sync—routing the click through the headphone output (although you can send the click through any output you want, or send it to other band members).

A flexible partner for computer-based music production
As a modern music-maker, any new addition to your rig needs to play nicely with your computer setup. Highly flexible, the TM-6 PRO works as trigger to MIDI convertor with audio interface, so you can play backing and click tracks from your computer via a USB cable. Audio/MIDI interface functions offer 8-in/8-out (max) audio with an impressive sampling rate of 44.1kHz/48kHz/96kHz, plus MIDI in/out capability. Each audio in/out is assigned to each TM-6 PRO’s Phones L/R, Master Outputs L/R and Direct Outputs 1-4. The possibilities are open-ended: you could output the backing track from your computer to the specific direct output, or record the audio from the specific direct output to the DAW via USB audio.
Features
866-498-7882 English
877-687-5402 Español
Chat Now
Give Feedback