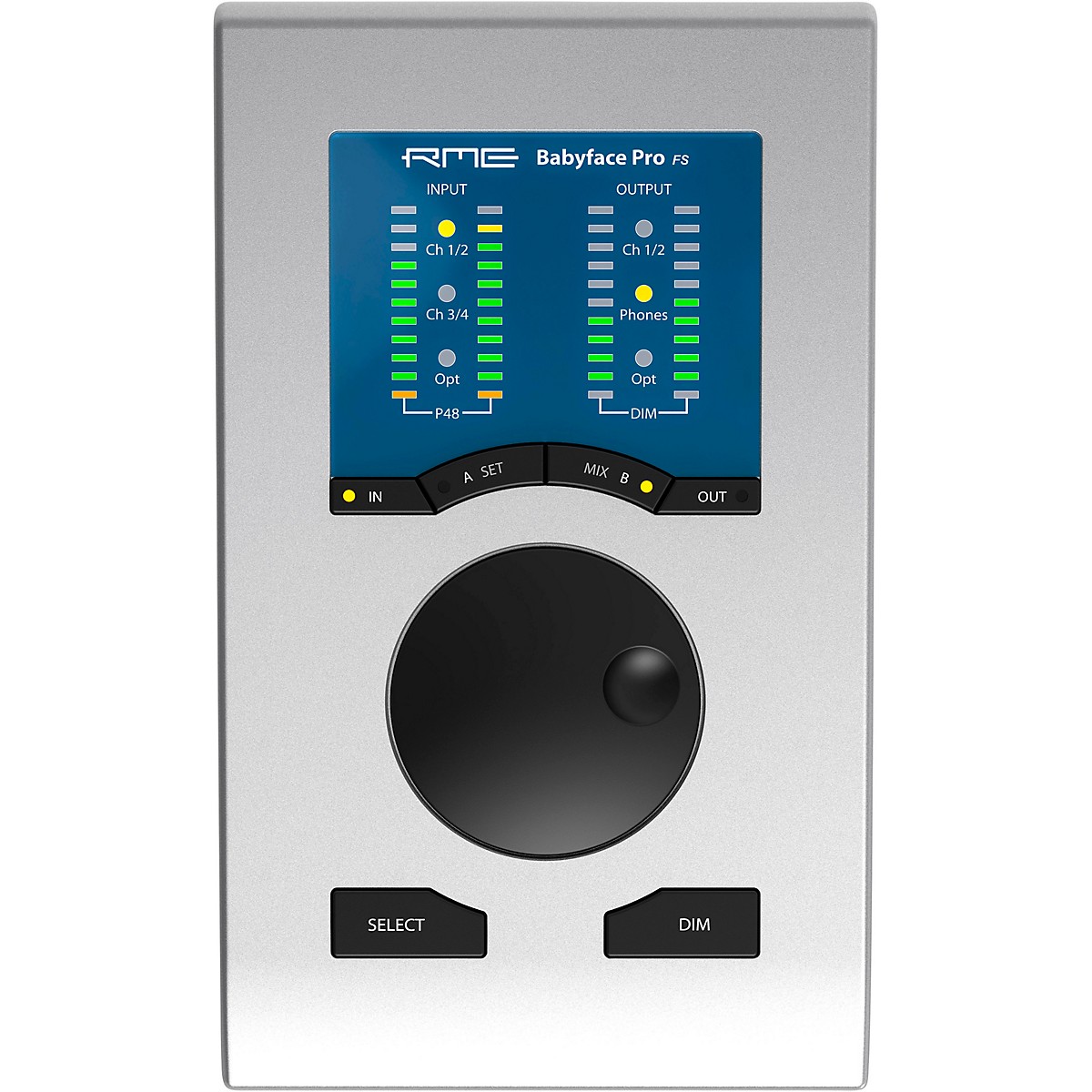 Four years ago the Babyface Pro again demonstrated RME’s absolute commitment to superior craftsmanship, not only in audio circuits and driver development, but also in mechanics. Created with the highest precision from a block of aluminum, this high-end portable interface incorporated newly designed analog and digital circuits. Its innovative energy...  Click To Read More About This Product

Four years ago the Babyface Pro again demonstrated RME’s absolute commitment to superior craftsmanship, not only in audio circuits and driver development, but also in mechanics. Created with the highest precision from a block of aluminum, this high-end portable interface incorporated newly designed analog and digital circuits. Its innovative energy saving technologies provided supreme fidelity with no compromises in level, noise or distortion.

In the new Babyface Pro FS even more improvements were implemented:
+19 / +4 dBu switch on the bottom adds a direct way to reduce the output level, thus improves SNR for sensitive active monitors, avoids distortion / overload, and helps to keep TotalMix FX faders near 0 dB instead of high attenuations.
Full SteadyClock FS circuit as in the ADI-2 Pro FS for lowest jitter and highest jitter immunity.
3.5 mm TRS phones output power rises from 70 mW to 90 mW. THD of both phones outputs improved by up to 10 dB. Uses same output op-amps as ADI-2 Pro now. Output impedance of 3.5 mm TRS lowered from 2 Ohms to 0.1 Ohms.
Mic inputs SNR improved from 112.2 dB to 113.7 dB, TRS Line inputs SNR improved from 114 dB to 116.3 dB (120 dBA). THD Line inputs improved by 8 dB.
6 samples less latency on the AD side by new ADC (5 samples AD, 7 samples DA. It won't get quicker...).
All the above improvements were achieved without raising the units power consumption.
K-slot for theft protection.

The 3.5 mm TRS phones output power rises to 90 mW. THD of both phones outputs improved by up to 10 dB. and uses same output op-amps as ADI-2 Pro now. Finally the output impedance of 3.5 mm TRS was lowered from 2 Ohms to 0.1 Ohms.

Full range capture - Improved Mic & Line Inputs
For the main I/O RME have designed a XLR socket, which integrates seamlessly into the housing and saves space.

Babyface Pro’s incredibly efficient design almost never requires an external power supply – it’s perfectly stable on USB 3 bus power, and also most USB 2 ports, with no degradation in any technical specification. This makes it perfect for mobile recording, even with a pair of your favorite condenser microphones.

The comprehensive feature set continues with an optical TOSLINK I/O; use as either an ADAT port with SMUX support or SPDIF for sessions up to 192 kHz. In combination with an external ADAT converter, the Babyface Pro fully supports 12 analog inputs as well as 12 outputs, making it ideal for both live and studio multi-track applications. You can plug any instrument, line or high impedance, into Babyface Pro’s jack inputs 3 & 4. Record your guitar on the go, with no additional hardware required. MIDI I/O via an included breakout cable completes the package.

More Pro-Level Performance with SteadyClock FS
In digital audio, the clock frequency is an essential factor, as it creates the correlation between the audio bits and the time reference. Unfortunately, the clock frequency is not always as stable as desired. The Babyface Pro FS offers the full SteadyClock FS circuit as in the ADI-2 Pro FS for lowest jitter and highest jitter immunity. Excellent performance in all clock modes and High Quality Analog Conversion to hear your mix as it is. Digital format conversion in RME products are done without any loss or degradation, and SteadyClock FS ensures your sonic image will never experience degradation. This helps to optimize recordings and mixes because the soundstage has more depth and clarity.

Babyface Pro FS ships with RME’s TotalMix FX, available for Windows and Mac OS X. An iOS version is available as well. This amazingly versatile software allows you to use Babyface Pro in any situation. For example mixing your guitar and vocals to headphones has never been easier. The FPGA-based DSP mixer adds a flexible, 3-band parametric equalizer to all inputs and outputs. Reverb and delay FX are also available.

Additionally RME’s latest software, TotalMix Remote, enhances the power of the Babyface Pro FS by enabling remote control via iOS, PC or Mac. With a straightforward set up process — simply enter the IP address of the computer you would like to control with TotalMix Remote and get going — users can quickly adjust any aspect of TotalMix FX on a host system while walking around the studio with their tablet, or from a control room located elsewhere in the facility.

The FPGA-based DSP mixer adds a flexible, 3-band parametric equalizer to all inputs and outputs. Reverb and delay FX are also available. Latest generation low latency AD/DA converters, combined with RME’s unique SteadyClock FS technology, result in exceptional specifications that will satisfy the most demanding of professionals. Combining a huge feature set with sonic excellence and intuitive control, whether for the studio or on the move, the RME Babyface Pro is the most comprehensive and versatile compact audio interface ever built.

Easy to Use and Perfectly Stable
Straight to the core without interference: the reference design of the Babyface Pro leaves nothing to be desired. RME devices are designed to conserve music as it is. Audio signals are passed in their entirety, nothing added, nothing taken. For the new Babyface, the audio circuits have been improved to meet even highest gain levels with best dynamic range. The clever user interface is informative and clearly laid out. It makes access to every feature and configuration mode of the Babyface Pro intuitive and easy to use.

RME USB - Transport Audio with Lowest Latency and Industry Leading Stability
As part of RME’s product philosophy, they always further develop and optimize their core technology. RME have paved the way for multichannel audio and were the first to deliver professional performance over USB 2.0. They place a high level of attention on the development of reliable, stable, and regularly updated drivers for their products and an unwavering focus on audio quality. This guarantees your Babyface Pro FS will be never outdated and always updated.

And because RME Audio develops its own interface core, it’s not dependent on 3rd parties for upgrades, modifications or bug fixes, so customers can use latest operating systems without interruption or delay.