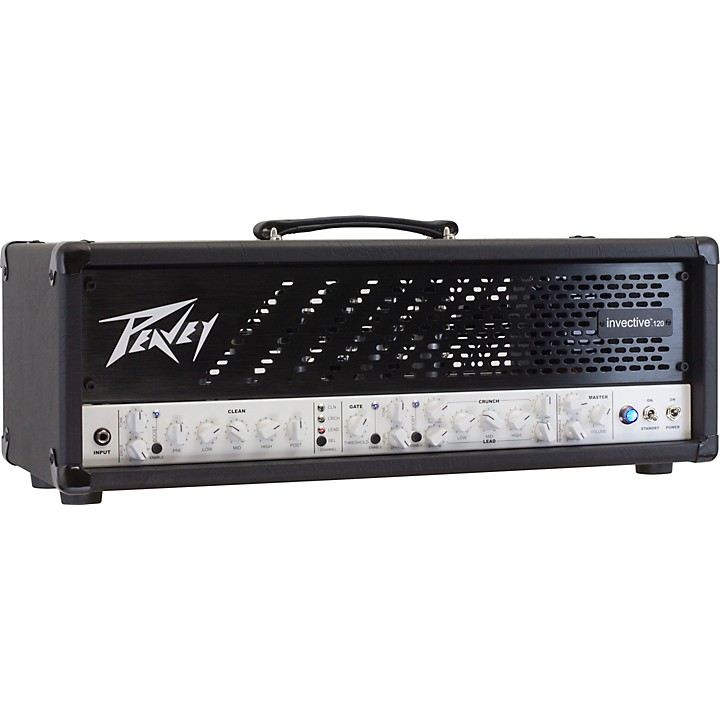 Notify me when this item is in stock.
Protect your gearLearn more
Cover drops, spills or cracks with Pro Coverage
Hey there. How can we help you out?We're here for your gear needs.
866-498-7882
See All Peavey Tube Guitar Amplifier Heads

Guitarists with heavier tastes looking for their next upgrade will find a sturdy solution in the Peavey invective.120 head. With design input from Periphery's Misha Mansoor, this 120W powerhouse will help players achieve the most revered metal sounds, from woody and clean to the most extreme of high-gain tones.

On the front panel, players will find even more options and advanced control. The invective.120 Head has a single input with three key remote switchable channels: Clean, Crunch, and Lead. The all new clean channel is voiced to be pristine and uniquely suited to work with closed back cabs. Both the Lead and Crunch channels have independent Pre and Post Gain controls as well as shared low/mid/high EQ, in line with the revered Peavey 6505 head. They also feature a shared switchable front end boost fast attack input noise gate with a threshold for complete control over muting. The standby and power switches with blue jeweled pilot light indicate when the amp is ready. Just adjust the Master Resonance, Presence and Volume knobs, and it's ready to rock.