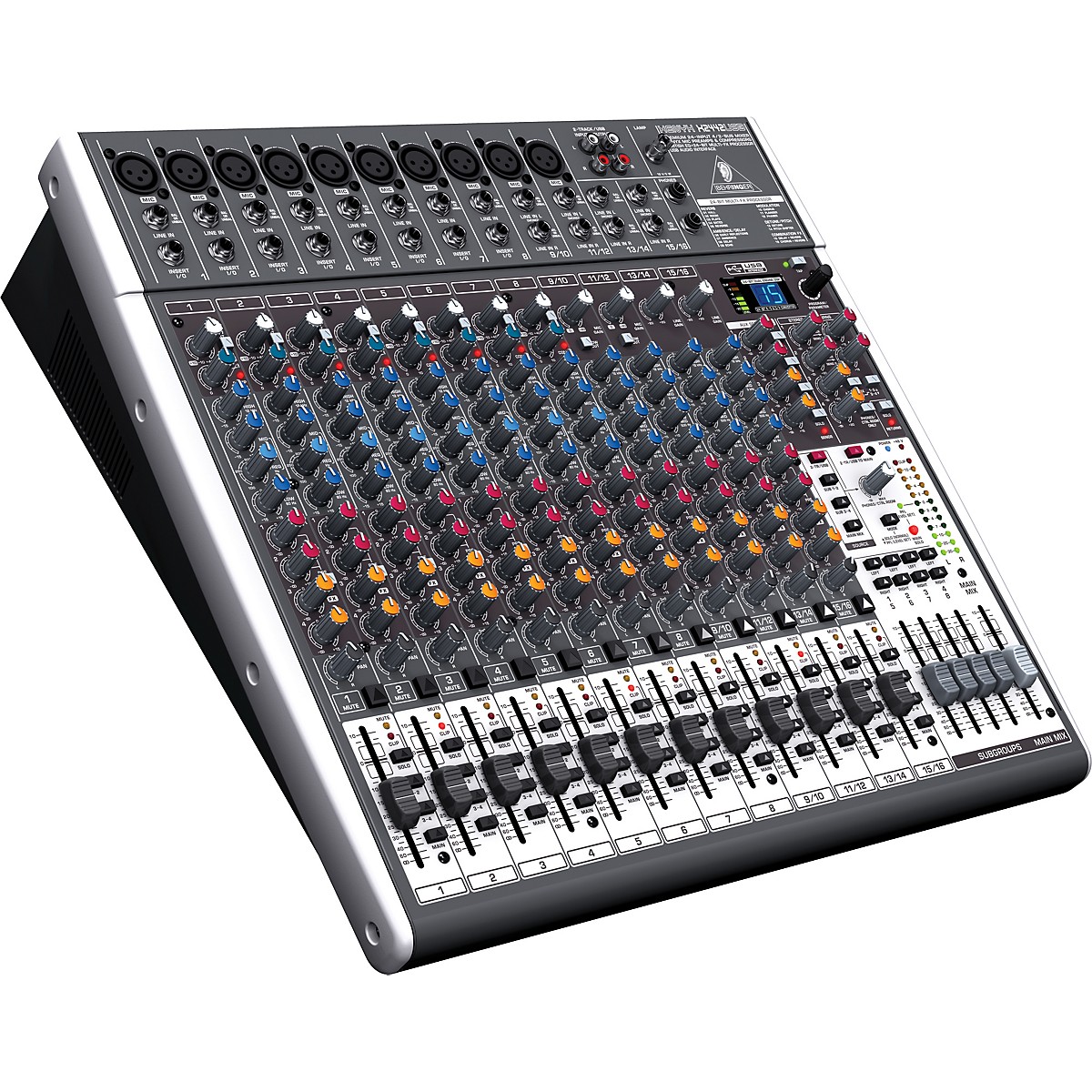 The Behringer X2442USB mixing console takes the 2442FX up a notch, providing all the same great features, plus Behringer's 24-bit, dual engine FX processor, with 16 editable, studio-grade presets including reverb, chorus, flanger, delay, pitch shifter and multi-effects. User-definable parameters include reverb time and brilliance, delay room size and repetitions, modulation depth and speed, and much more. The audio mixer's time-based functions can be addressed via a handy Tap button. The most recent parameter settings are always stored in memory. The USB mixer also features 8 studio-grade compressors with super-easy one-knob functionality and a control LED, so you can take your vocals and instruments to a professional level.

The Behringer XENYX USB mixer is designed to handle your live gigs, and it provides the state-of-the-art tools you need to make stunning, professional-quality recordings. Along with a built-in USB/audio interface, the XENYX USB mixer comes with all the recording and editing software you'll need to turn your computer system into a complete, high-performance home recording studio.

Sonically Superior Mic Preamps
All Behringer XENYX mixing consoles have one thing in common-great-sounding, high headroom XENYX mic preamps. These state-of-the-art mic pres represent a major step in the evolution of audio technology-and they can easily hold their own, even when compared to the most expensive standalone mic preamps. XENYX preamps offer a staggering 130dB of dynamic range, with a bandwidth that extends from below 10Hz to well above 200kHz. Armed with these outstanding mic preamps, Behringer XENYX USB mixers provide such transparent, crystal-clear performance you just might think someone upgraded your mics while you weren't looking.

Sublimely Musical British EQ
The British mixing consoles of the 1960s and '70s changed the sound of rock and roll-without them the British Invasion might not have happened. Those legendary mixing desks soon became the envy of engineers and producers all over the world. The channel EQ on the Behringer XENYX USB mixer is based on that very same circuitry, allowing you to imbue signals with incredible warmth and detailed musical character. Even when applied generously, these equalizers exhibit sweet forgiveness and superb audio quality.

One-Knob Compression
Ask professional sound engineers what their favorite piece of external processing gear is and the majority response will be virtually unanimous-dynamic compression. What is compression? Compression essentially limits the dynamic range of a signal, lowering the level of loud sounds and turning up softer sounds, to achieve sonic balance. But applying compression is a delicate art that many novice, and even intermediate, sound techs have great difficulty mastering. Behringer's "one-knob" compression is available on all mono channels and is easy to operate, even for entry-level users. With this one knob, you can easily dial in the perfect amount of compression for instruments and vocals, creating powerful mixes with punch and clarity. This is indeed a rare feature for affordable mixers in this class-but standard on all Behringer XENYX USB mixers.

Effective FX
The Behringer X2442USB mixer features 24-bit dual engine FX processor, with 16 editable, studio-grade presets including reverb, chorus, flanger, delay, pitch shifter and multi-effects. Complete with a highly accurate input meter, these effects can be altered to your personal taste via the Parameter control. Time-based functions can be entered manually by pressing the Tap button in tempo with the music.

Recording Bliss
There was a time when the recording process called for lots and lots of expensive gear, which meant the average musician had to buy time at a recording studio-and that time was pricey indeed. But modern technology has put personal recording well within the reach of virtually anyone with access to a computer. How do you get all that music flying around your brain into your computer? That's where the Behringer XENYX USB mixer comes in. Thanks to the built-in, bi-directional stereo USB audio interface, you can connect any of these mixers directly to your PC or Mac computer via a single USB cable. Now any signal source you connect to the mixing console can be recorded directly to your hard drive. Which brings us to music software¦

Free Would Be Nice!
Because you'll want to take full advantage of the Behringer XENYX X2442USB USB mixer's recording and podcasting potential, Behringer's thrown in a massive software package that includes Audacity (the most popular open source audio editor), Podifier, Juice, Podnova, and Golden Ear (a great selection of podcasting software). You're ready to go live on your PC or Mac computer right out of the box! The music software also gives you more than 100 virtual instruments and 50 FX plug-ins, turning your computer into a complete home-based or mobile recording studio from input to output.

energyXT2.5 Compact Behringer Edition Included
When you're ready to take your recording projects to the next level, XT Software's energyXT is just the trick. This DAW (digital audio workstation) makes it easy to manipulate your audio and MIDI files, turning song ideas into stunning CD or Web-ready recordings. energyXT includes its own multi-FX processor, plus a built-in synthesizer/sampler and a drum machine, both of which can be accessed directly via an external controller (such as Behringer's UMA25S) or programmed in step-write mode.