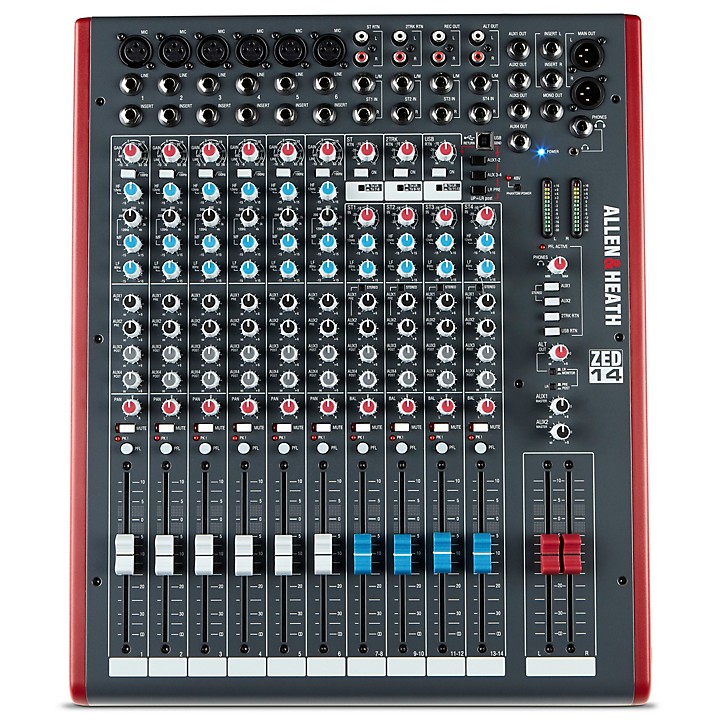 The Allen & Heath ZED-14 USB Mixing Console has incredibly advanced features for a mixer at this level-it has 13 independent sources to the mix, 10 independent outputs, 4 aux sends, a USB send & return for PC or Mac recording, playback and effects, a unique dual stereo input capability and some very advanced monitoring facilities. In fact, ZED-14 is so packed full of great features that you'd think it would cost much, much more.

The ZED-14 is a mixer for anyone, from entry-level to professionals, who appreciates fantastic uncolored sound, lots of headroom, a truly professional feel, and rugged build quality. It can be used for many different tasks, whether in live performance, utilizing plug-in effects via USB, live recording via USB and Cakewalk, studio recording or mixing down to produce your own 2-track recordings.

One of the great things about the ZED series is the number and variety of things you can plug in. In addition to the six mono channels there are four stereo channels, each with a main stereo input on jack sockets, and with the ability to take additional stereo inputs from phono sockets or from the USB audio input, flexibility gives you control. In all, ZED-14 boasts 99 different controls on its front panel-way more than any of the competition! 6 mic/line channels are provided on ZED-14 - plenty for mics or DI boxes for a small band, duo or solo performer 4 stereo line inputs-dual inputs, both with gain and 2-band EQ

Based on the proven pre-amps from the hugely successful PA series, the ZED series has new DuoPreTM pre-amps, which use a two stage design, with carefully controlled amounts of gain in each stage. When amplifying the signal from the XLR input, the gain range is huge-69dB of range to be exact-and is very evenly distributed around the gain control, meaning better control of signal level. Most of the gain comes from the first stage, so unwanted noise is kept to a minimum. Line level signals are simply plugged into the second stage of the pre-amp by using the line input jack socket, which has the great advantage of less noise when using the line input.

4 aux sends are provided, of which 1&2 are prefade for foldback monitoring, and 3 & 4 post-fade for effects sends. A stereo signal can be sent from auxes via USB to computer to create 2 separate record feeds independent of the main LR mix (1&2) and or used as FX sends (3&4).

Getting audio to and from a computer easily is now a common requirement for live sound and music production. The way we have implemented this on ZED is super-flexible and super-easy. No longer do you need to fiddle around the back of your PC to get to the soundcard inputs, only to find that the levels are all wrong and noisy. Just plug in a USB lead to your ZED, select the USB routing on the mixer and the device on your computer and that's it! Quality audio to and from your PC or Mac. Three switches provide different send/return configurations for recording, playback and utilising external FX.

At this level, most mixers are built using a single, flat PCB with all the pots and switches attached at right angles. ZED-14 utilizes individual vertically mounted channel circuit boards with each rotary control fixed with a metal nut to the front panel-making a much more robust product that will resist damage and give years of reliable use. ZED also has professional 100mm faders for ultimate control over your levels.

Allen & Heath has teamed up with major software supplier, Cakewalk, to bundle its SONAR LE music creation and audio production software with the ZED-14, giving you a fantastic, high spec digital audio workstation.

SONAR LE is a software application from Cakewalk and is included free of charge with the ZED-14 mixing console. SONAR LE is a powerful first step into the world of sequencing and hard disk recording on the Windows platform.
You'll be able to record from your ZED mixer, create tracks and arrange songs, then play back to your ZED mixer via the USB port. You can decide whether the SONAR family of products is right for you. If you choose to upgrade your copy of SONAR LE to a more full-featured version, like SONAR Producer or Home Studio Editions, you'll now be able to do so at significant savings.
Features
ZED-14 MixerSONAR LE
Specifications
ZED-14 USB Mixing ConsoleOutput: Frequency Response:THD+N:Headroom:USB Audio CODEC (Coder/Decoder):Noise:SONAR LE System RequirementsMinimum RecommendedOperating System: