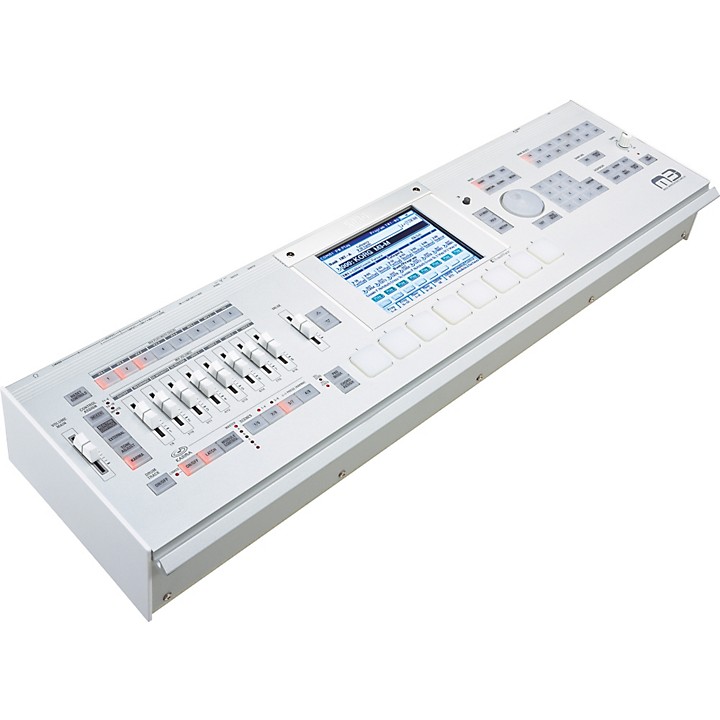 Korg redefines the workstation category by distilling the power of their flagship OASYS into the M3-M tabletop music workstation/sampler! The powerful EDS (Enhanced Definition Synthesis) sound generator is derived from the OASYS' HD-1 engine design, and it also has advanced second-generation KARMA functionality in addition to a multipurpose control surface.

Adding innovations such as the new concept of virtualized hardware that allows tighter integration with DAW systems, Drum Tracks which provide a instant groove to play along with, and the Korg Komponent System concept that facilitates more flexible system construction, the M3 music workstation/sampler opens an exciting page in music making.

Enhanced Definition Synthesis”a new horizon of sound-making potential
The M3 features a newly developed EDS sound generating system based on a chip design developed in parallel with the HD-1 engine from the flagship OASYS. It takes full advantage of the M3's 256MB of PCM source material.

The filter section lets you simultaneously use two resonant filters for each oscillator and can be configured in series or parallel. Four filter types are provided: low-pass, high-pass, band-pass, and band-reject.

The amp section features a driver circuit that gives the sound a sense of edge and character, along with low boost to help shake the walls when needed. Integrated 3-band EQ allows tonal sculpting without needing to go to the effects section. Detailed envelope generators, abundant modulation routings, and the all-new AMS Mixers give you advanced processing possibilities for an intense level of sound shaping.

Funky drummer
The M3 provides a Drum Track function that adds a groove to each sound you play. Combined with KARMA, Drum Tracks make a single program a complete sonic adventure sure to inspire. You can select from over 500 patterns and start them with a dedicated button, from a desired region of the keyboard, or by playing a velocity above a specified threshold. Drum Tracks are driven by MIDI data and stored in a pattern format so you can create your own patterns in sequencer mode by recording them or importing them from SMF data or other user's songs. You can also convert recorded KARMA data as MIDI events for further manipulation or import sampled loops.

Expanded Combination Mode
Combination Mode lets you assign multiple Programs freely as splits and layers across the keyboard, including velocity switching and cross-fading for complex and expressive sounds. The M3 allows for sixteen timbres at the same time, including a Drum Track, up to four KARMA Modules, multiple effects, and much more. Each timbre has dedicated 3-band EQ for getting the perfect mix, and a powerful Tone Adjust setup for detailed in-context sound shaping.

Great sounds
The M3's international voicing team delivers the goods: stunningly realistic imitative sounds, fat synth sounds, imaginative textures, evocative sound effects”it's all here. The M3 comes loaded with 512 Programs and room for a total of 1,664 user sounds (13 banks plus GM). All sound locations are fully editable (except GM banks), so you are always free to tweak a sound if needed. Adding in the EXB-RADIAS option delivers 128 powerful MMT synthesis sounds. There are 32 drum kits provided, and room for a total of 144. As for the 16-part Combinations, 384 come preloaded, with room for a total of 1,792 (14 banks). All sounds (Programs and Combinations) are divided by category and subcategory making it easy to find and organize your sounds.

Second Generation KARMA
The second generation KARMA functionality that first appeared on the OASYS is fully implemented in the M3. KARMA is the inspiring, realtime music generation system that can help you play everything from natural instrument gestures like intricate fingerpicking, strumming, and harp glissandos, to complex cascades of notes, dance riffs, gated, and chopping effects, plus improvising drum grooves.

In Program Mode, one KARMA Generated Effect (GE) can be used, in Combi and Sequencer modes, four KARMA Modules are available simultaneously. Eight sliders, eight switches, and eight scenes provide dedicated realtime control and the ability to store complete snapshots of your settings.

The Control Surface can access and manipulate each module individually on its own Module Layer. In addition to the four individual Module Layers, there is a Master Layer that can be mapped to parameters from any of the modules, even grouping them together.

Finally, KARMA provides a signature sonic effect called Wave-Sequencing that can change a sound's waveforms rhythmically in realtime, along with everything else KARMA is doing, allowing each note to access a different waveform as it is generated. The results can resemble traditional wave-sequencing, or enter completely uncharted realms of sound design.

Ultimate expressive power
The color LCD of the M3 not only provides a touchview GUI that ensures intuitive and easy operation, but it also operates as an X-Y Pad, allowing sound and effect parameters to be controlled in realtime by sliding your finger across or tapping on the screen”much like the innovative Korg KAOSS Pad. Further control is provided by a Motion function that lets you capture and play back your finger moves to shape your sound and performance in unique ways. The screen even changes colors in response to the movement of your finger for visual feedback of your performance.

Eight dynamic, velocity-sensitive pads give you a great way to play drum sounds or up to eight-note chords, either live or as triggers for the powerful KARMA function.

The eight slider/eight switch control surface offers the same multifunctionality as on the OASYS: it can be used as a mixer, a set of expressive sound controls, an editing interface, a realtime KARMA performance interface, or to control external software and hardware synths and effects.

RADIAS inside
You can add an internal RADIAS analog modeling synthesizer sound generator board (one timbre, four parts, up to 24 voices), with onscreen integration of all its parameters and full integration with the M3's effects, control surface and KARMA functionality. The EXB-RADIAS offers the same vocoder as the RADIAS, offering 16 bands with individual control over level and panning. Formant Motion records the formant of a sung or spoken phrase so it can be recreated anytime.

Open Sampling
The M3's Open Sampling System lets you sample and resample in any mode to produce remixed combinations of sounds and effects, or to capture full performances In-Track within the sequencer. Cutting-edge editing tools include Time Slice, Time Stretch, Crossfade Looping, Rate Change and Normalize.

Stock sampling memory is 64MB, and can be increased to 320MB by adding the optional EXB-M256 memory expansion board. Samples in Korg native format, AIFF, WAV, Soundfont V2.0 and AKAI (S-1000/3000 with advanced Program parameter conversion) formats can be used.

Sampling can also be done to attached media, so USB memory sticks and hard drives can be used to extend memory size to resample a complete song as a WAV file to be burned to a USB CD-R/RW as an audio disc, or for moving to a computer for further editing and manipulation.

High-Resolution Sequencer
The sequencer that's at the heart of the M3's song production is an intuitive 16-track design that holds up to 128 songs and 210,000 notes. The high timing resolution of 480 PPQ captures every nuance and detail of your performance. Three-band EQ per track provides detailed sound-shaping, as does the Tone Adjust sound tweaking function.

The Cue List function has been a popular feature ever since the now-classic TRITON series. It lets you create songs in sections, or play back completed songs as a medley. All the now-classic Korg features are included, such as the one-touch Auto Song Setup feature, which takes you from playing a Program or Combination to ready-to-record status in one easy step.

Song Templates contain pre-assigned effect routings and program assignments”the M3 comes with 16 of these Song Templates, plus another 16 you can custom-tailor to your own needs. Each Template Song also provides a number of rhythm patterns”including intro, fills and endings”you can use to instantly create a rhythm track.

Realtime Pattern Play and Record (RPPR) can be used to assign sequenced Patterns to individual keys on the keyboard for an interactive performance, or to quickly build up tracks. You can record controller data, Sys. Ex., or even KARMA phrases and trigger them as you like.

Virtualized hardware
By connecting the M3 to your computer via USB and using the included stand-alone M3 Editor software, you can edit sounds and settings from your computer. A plug-in version of M3 Editor is also provided, so you can use it from within your DAW as a plug-in instrument. The editor runs as a VST, AU or RTAS plug-in for maximum compatibility. For even more complete integration, Korg's new "Virtualized Hardware" concept comes into play. When the optional EXB-FW FireWire board is installed, a single FireWire cable will convey both the M3's MIDI and audio signals to the tracks of your DAW in which the plug-in is running.

Korg Komponent System
The M3 music workstation/sampler introduces the Korg Komponent System, featuring detachable keyboard and sound generator sections. The 61-key model lets you mount a RADIAS-R analog modeling synthesizer instead of the M3-M sound generator, the 73-key model lets you mount the M3-M together with a RADIAS-R analog modeling synthesizer, and the 88-key model supports the combination of M3-M and RADIAS-R or even mounting two M3-M units simultaneously. Of course you can detach the M3-M sound generator and use it as a sound module, giving you great flexibility for constructing the system you need whenever you want.

A rich array of input/output jacks
The M3 offers two analog and two digital (S/P DIF) inputs. In addition to the main two-channel output (L/MONO, R), there are four independent outputs as well as two-channel digital output (24-bit optical S/P DIF). Two USB connectors are provided: a type-B USB connector for connection to your computer as a MIDI interface, and dual type-A connectors for connecting external storage media. USB 2.0 is supported to ensure high-speed transfer of large amounts of data.

The optional EXB-FW adds Firewire ports for conveying both audio and MIDI to your computer, and for daisy-chaining the M3 in your Firewire-based studio setup.

Three pedal inputs are provided, including damper jack support for half-damper sensing. The footswitch and footpedal jacks can be assigned to wide choice of functions including modulation, sostenuto, Program advance, punch-in recording and much more.
Features
Synthesis TechnologyTone GeneratorMaximum PolyphonyOscillatorFiltersEQModulation