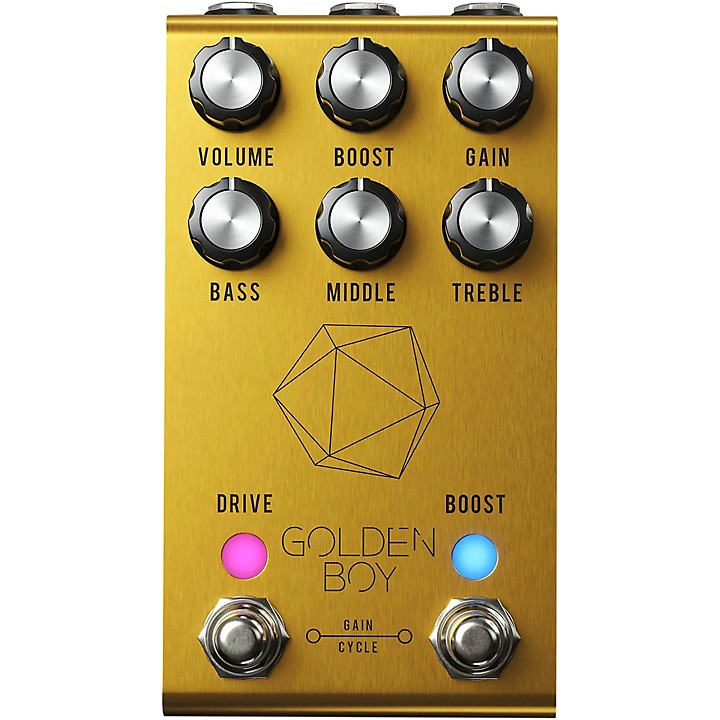 The Golden Boy is a very flexible overdrive with 4 presets for clipping options, an innovative gain adjustment feature that Jackson Audio calls Gain Cycle, and a 3-band active EQ for maximum tonal flexibility. To top it off, Jackson Audio added a boost circuit which is the same type of Mosfet boost circuit found on their top-selling Prism Preamp pedal.

The boost circuit is in its own true bypass loop, which means it can be used independently of the Drive circuit. To activate/deactivate the boost circuit, simply press the Boost footswitch. One of the things that makes the boost in the Golden Boy different from other boosts on the market is that it has 4 presets available. Each preset is EQ’d slightly differently to allow it to alter how it interacts with the overdrive circuit in the Golden Boy, or any other pedal you may have in your rig.

Green LED: Mid Boost. Not as thin as the yellow mode, the green mode allows more lows and takes on the character of a mid boost.

Aqua LED: Tailored Boost. Most people will find this a perfect setting that will complement most any overdrive setting in the Golden Boy.

The Golden Boy is based on the Bluesbreaker/King of Tone circuit, so the resulting tone is very open, uncompressed and transparent-sounding. The Golden Boy sits in the mix perfectly and while it adds overdrive and grit, your guitar still sounds like your guitar. Where the Golden Boy differs from other Bluesbreaker type circuits is that it has the ability to run much higher gain and instantly switch to a low gain transparent overdrive with a tap of the footswitches. With four gain settings at your feet while you play, you can use the Golden Boy as an always-on tone shaper, a low gain transparent overdrive, a mid gain drive or a high gain solo drive all without bending down to adjust settings. With the Golden Boy, you keep playing and use your foot (or MIDI) to adjust the gain for you.

The Golden Boy allows for 4 different presets of clipping diodes, which themselves drastically alter the tone and feel of the way the overdrive clips and distorts.

Green: Classic Screamer. Two symmetrical silicon diodes give the classic drive and compression that the Tube Screamer is known for.Preset 2
Magenta: Asymmetric Clipping. Three asymmetric silicon diodes will clip the top and bottom portions of your guitars waveform differently resulting in a more complex and interesting tone. This sounds great when laying down aggressive rhythm parts.

Blue: Symmetrical Clipping. Four symmetric silicon diodes will clip the top and bottom portions of your guitars waveform evenly which gives a more focused and direct tone. Two notable pedals that uses this style of clipping are the Timmy and the King of Tone.

Amber: Vintage Marshall. Two Red LED’s are used to symmetrically clip the top and bottom portions of your guitars waveform evenly. The LED’s allow much higher headroom so your tone will stay more open and less compressed, much like a vintage Marshall.

When we were designing the GOLDEN BOY we knew we wanted to give the overdrive section a lot of tonal flexibility and most importantly make that flexibility useful on stage. So when changing clipping diodes we included circuitry that level matches the output of the pedal as various clipping diodes are selected. So now you can select between all four clipping options, your volume level will remain constant. More importantly, the difference that you hear between the clipping modes will be because of the difference in how those clipping diodes sound and not because your volume is jumping all over the place as it does with other designs.

Another exciting feature of the Golden Boy is the new feature that Jackson Audio developed called Gain Cycle. It takes the Gain knob setting, which selects your maximum gain, and divides that level of gain into 4 equal parts.

To top it off, the Drive circuit of the Golden Boy has a 3-band active EQ. The EQ circuit features a studio-grade EQ that gives tremendous tonal flexibility to the Golden Boy. Based on the legendary Baxandall EQ that is featured in countless studio EQ’s, the Golden Boy EQ takes this circuit and tailors it for guitarists. Jackson Audio spent dedicated time on this EQ dialing it in so it would hit all the frequencies that guitarists need to adjust, and then sweetened it by removing the ear fatiguing highs and lows that can appear at extreme settings.

Acts as a master volume for the overdrive circuit.

Sets the amount of boost when the Boost footswitch is engaged.

Sets the maximum gain for the overdrive circuit.

The 12:00 position is totally flat with +/- 12dB boost/cut on either side of center. The mid-frequency is centered around 660Hz.