false
Contactless Curbside Pickup and in-store shopping available at select locations   Get Details
Due to COVID-19 we are focused on protecting the safety of our employees. We are accepting online orders but shipments may take longer than normal. You now have up to 180 days to return your gear if needed. Please stay safe. #keepthemusicgoing See all updates related to COVID-19
{ "pageType" : "item_page", "placements" : "5", "placementNames" : "rrt1,rrt2,rrCompare,rr1" }
{ "pageUrl":"GuitarCenterApp://ProductDetailsPage", "pageParams":"ID=site51315699573875631641" }
Top Seller 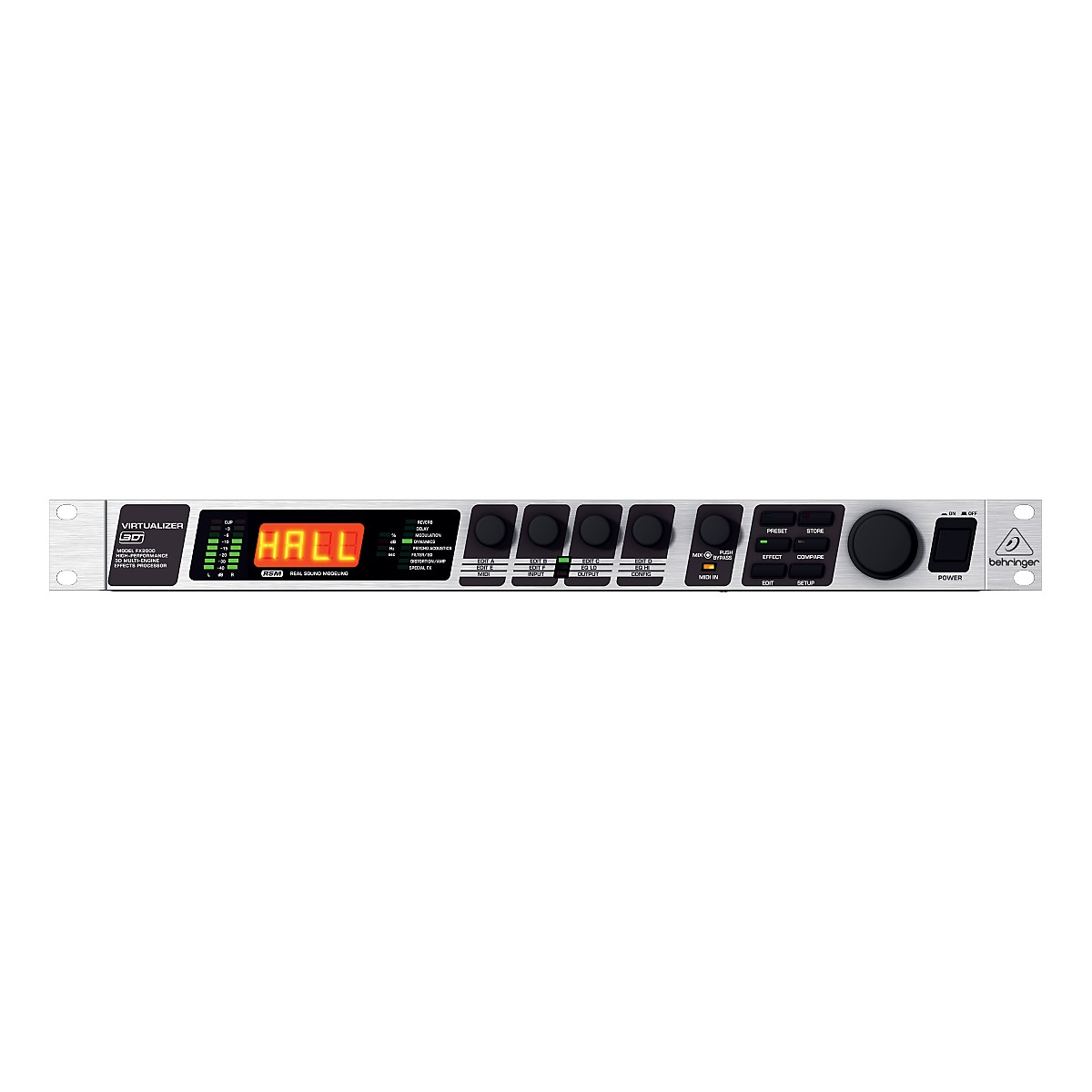 Get even more mind-expanding power for your keyboard, bass, guitar or vocals with the Virtualizer 3D FX2000 Multi-Effects Processor from Behringer. This rack unit has 71 incredible new algorithms, including true studio-grade stereo and 3D effects that will add a head-spinning new dimension to your sound, both live and in the studio. The FX2000 empl...  Click To Read More About This Product

Get even more mind-expanding power for your keyboard, bass, guitar or vocals with the Virtualizer 3D FX2000 Multi-Effects Processor from Behringer. This rack unit has 71 incredible new algorithms, including true studio-grade stereo and 3D effects that will add a head-spinning new dimension to your sound, both live and in the studio. The FX2000 employs BEHRINGER RSM (Real Sound Modeling) technology to simulate acoustic environments with stunning accuracy. Effects options include powerful modulation, amp simulation, distortion and special effects, as well as effective dynamic and psychoacoustics processing. Performance is further enhanced through user-addressable high and low EQ and wave-adaptive VIRTUAL ROOM reverb algorithms.

Reverbs & Delays
Because it is one of the most desired effects, the FX2000 provides 12 different reverb programs, so you always have the ideal reverb for your live performance or studio needs, including:
CATHEDRAL
GOLD PLATE
SMALL HALL
ROOM
CONCERT
STAGE
SPRING REVERB
AMBIENCE
EARLY REFLECTIONS

Specialty reverbs include:
GATED REVERB - reverb is synthetically turned off after a predetermined amount of time
REVERSE REVERB - reverb envelope is reversed-it slowly gets louder

Much More than Just Reverb and Delay
The FX2000 has some of the best-sounding reverb and delay programs, but that's not all. It also provides excellent modulation effects (such as chorus, flanger and phaser), including special variations like musical pitch shifter, tremolo and even a leslie simulation.

Modulation and Pitch Shifter FX:
STEREO FLANGER - originally generated by playing back two synchronized "reel to reel" tape recorders with a finger rubbing on the flange of one of the take-up reels
VINTAGE FLANGER - simulates a guitar flanger stomp box
JET STREAM FLANGER - sounds like a classic analog flanger
STEREO CHORUS - combines a slightly detuned signal with the original
ANALOG CHORUS - simulates a guitar chorus stomp box
VINTAGE CHORUS - imitates a classic analog studio chorus
ULTRA CHORUS - creates the sound of an eight person chorus
STEREO PHASER - combines a second, phase-shifted signal to the original
VINTAGE PHASER - represents a guitar phaser stomp box
DUAL PHASER - processes the left and right channels separately
LESLIE - simulation of the rotating speakers typically used on an organ - Slow or Fast
PITCH SHIFTER (changes the pitch of the original signal) - can be used to create harmonies with the original signal or replace it entirely with the altered pitch. Choices include stereo, two and three vocal pitch shifter
VIBRATO - the peak frequency of the tone is periodically and uniformly changed (quickly or slowly)
TREMOLO (common vintage guitar amplifier effect) - a fast or slow periodic variation in volume
AUTO PANNING - signal is automatically sent from one side of the stereo image to the other, either once or multiple times

Psychoacoustic FX:
EXCITER - adds artificially generated overtones to the original signal, increasing presence and perceived loudness without significant increase in signal level
ENHANCER - a dynamic equalizer which brings more clarity and a better stereo locating to your sound, similar to the effect of an exciter
ULTRA BASS - sub-harmonic processor combined with bass exciter and limiter
STEREO IMAGER - divides the signal into middle and side signals, allowing individual signals to be amplified when desired and placed on the stereo image
ULTRA WIDE - creates a broader stereo image
BINAURALIZER - also creates a broader stereo image and compensates for crosstalk between both speakers

Filter/EQ FX:
AUTO FILTER - influences the frequency response of a signal. Three filter types in different variations are included: low pass, band pass and high pass
LFO FILTER - similar to the auto filter algorithm, but modulated by an oscillator with different wave types and speed adjustments
PARAMETRIC EQ - allows you to control the bandwidth, frequency and amplitude of a signal
GRAPHIC EQ - the sound spectrum is divided into six (6) adjacent frequency bands, which can be cut or boosted, bandwidth is predetermined

Enhanced User Editability
Logical grouping of parameters, along with the combination of encoders, buttons, LEDs and an easily readable LED display, make operating the FX2000 a breeze. You are free to edit up to seven parameters per preset, and then save them for future use in the 100 provided memory locations.