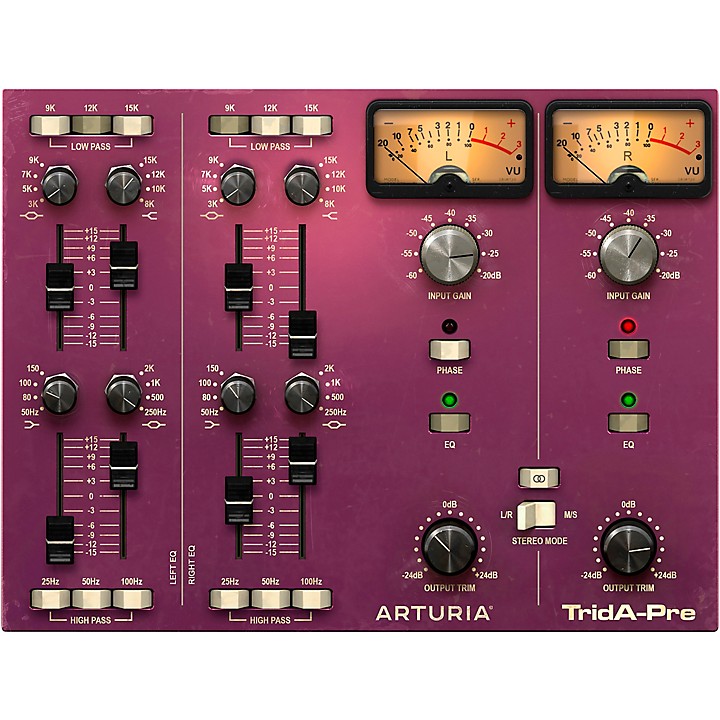 One of the most prized, rare, and exclusive channel strips ever made has been reborn in your DAW. For decades, the concept of pop music was synonymous with Trident Studios, the pioneering facility in the heart of London’s Soho district. Their client list reads like a who’s who of pop: The Beatles, Elton John, David Bowie, the Bee Gees, Genesis, Frank Zappa, Joe Cocker, Kiss, Lou Reed, Peter Gabriel, Marc Almond, Soft Cell, Queen, the Rolling Stones, Thin Lizzy, Tina Turner, T-Rex, and Yes.

At the heart of the studio’s sound was the Trident A Range console. It became so well known for its gorgeous, musical EQ and the full, rich tone it imparted that studios around the world were placing orders for an A Range of their own. Although only 13 were ever made, they created a legacy that continues to this day. Now, thanks to Arturia’s groundbreaking True Analog Emulation technology, you too can experience the incredible sound-shaping power of the legendary Trident A Range preamp and EQ.

The best of both worlds
In the digital age, the preamps included on audio interfaces tend to be highly transparent, amplifying the signal without adding “color”, a sort of tonal flavor that subtly changes the sound.

In the 60s and 70s, a period many consider to be the “golden age” of the recording studio, the preamps within their bespoke mixing consoles - like the Trident A range - were pioneering technology. Mix engineers found that, due to their analog components, the preamps would add a certain character to the audio, which gave each desk, and consequently each studio, a particular “sound”. As engineers became experts with these consoles, they would use the preamps as part of their creative process; pushing them hard to create harmonically rich analog distortion, for example.

Now, thanks to the digital audio revolution and the power of modern computers, you can enjoy the best of both worlds. The Arturia Pre TridA lets you add the iconic tone of the elite, rare, virtually unobtainable preamps found in the studios that created some of the biggest hits of all time.

Cracking the code
The channel strips found in the Trident A Range consoles are considered to be gold dust, available only to the finest producers and engineers at the peak of their careers.

Arturia built a reputation by recreating history’s best, most coveted keyboards and synths as software instruments. What better way to carry on this legacy than by bringing the most sought-after studio hardware right to your DAW? Although it would have been quite simple to just create a plugin that sounded similar to the famous Trident A Range channel strip, Arturia didn’t want to give you an approximation of the sound. Instead, they created a virtual replica of the hardware so you could enjoy all the subtle nuances that made the original the go-to choice for the biggest producers and engineers of the last 50 years.

Hear it for yourself
Having a world-class preamp emulation and EQ may seem like a small, almost insignificant addition to your software studio, but knowing that you’re honing the sound of your audio channels with a time-tested signal path will give you confidence, and make mixing easier than ever.
Specifications
GeneralSound Library Minimum System Requirements