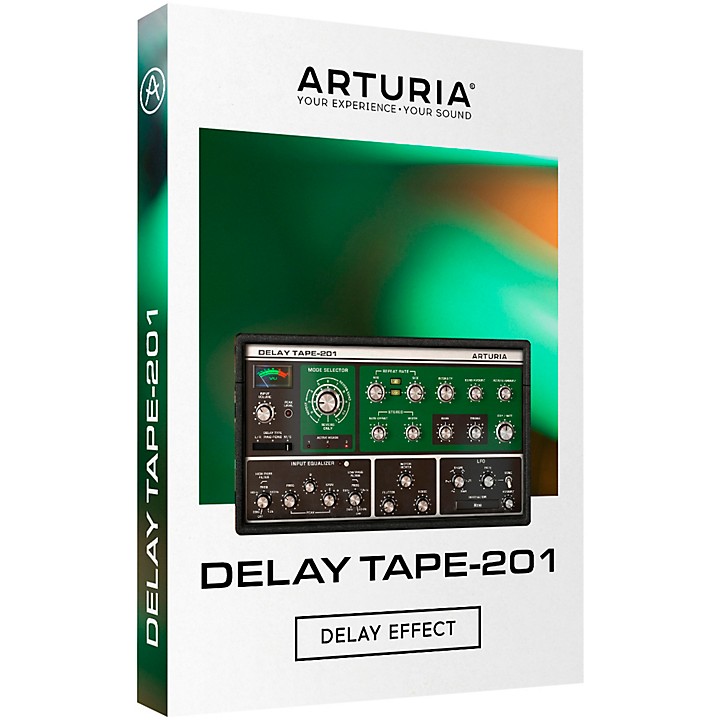 Saturated analog echo: it came from outer space, but now it’s available in your DAW. Organic, tape saturated delay and reverb at its finest. The Arturia Delay TAPE-201 gives you everything you love about the sound of vintage hardware tape delays, but with the reliability and versatility of software. Simple to use, fun to tweak, and with the most authentic tape delay emulation ever found in a software effect, Delay TAPE-201 will give you that spacious, reverberating delay you crave.

This amazing plugin pays tribute to the tape delays that changed the way music sounded forever. From the early EchoSonic pioneered by Ray Butts, Mike Battle’s Echoplex, to Ikutaro Kakehashi’s masterful Echo Chamber series, tape delays gave guitarists and organ players a new, exciting tool to use on stage and in the studio. Hearing this fluttering golden tone, it wasn’t long before studios, recording engineers, and producers wanted to make it part of their signature sounds.

In 1974, the music world was taken by storm, or rather, by space. An updated version of Kakehashi’s design, this time using standard 1/4" tape in a continuous, loose loop, and no reels, became the go-to favorite for musicians and producers. Finally, floaty, magic echo in a self-contained, reliable unit. It didn’t just sound great, it was versatile too. It had multiple delay patterns to create different rhythmic feels, EQ control to hone the delay’s tone, an integrated spring reverb, and - most famously of all - adjustable tape speed, letting it create otherworldly, haunting pitch changes in the delay.

Through the magic of Arturia's advanced TAE modeling technology, they were able to perfectly emulate this groundbreaking delay as a plug-in. All of this magic, all of these quirks, and all of this legendary tone are recreated in Arturia Delay TAPE-201.

The holy grail of tape delays, the iconic silver, black, and green-fronted echo unit was loved by countless musicians from all genres and styles. Alternative and indie legends like Radiohead, Sonic Youth, and Bon Iver loved its pitch-warping power. It fleshed out the guitar tone of everyone from The Shadows to Randy Rhoads. Electronic pioneers Vangelis, Boards Of Canada, Leftfield, and Jean-Michel Jarre adored its spatial width and thick, saturated tone. Dub legend Lee “Scratch” Perry and synth hero Brian Eno made its ghostly, analog decay part of their signature sounds. A list of famous spacey tape delay users would be impossibly long, but it would be a “who’s who” of influential music legends.

Now it’s your turn. If you want to add that magic, analog tape delay sound to your own music, complete with its quirky pitch control and saturated tone, Delay TAPE-201 is the perfect plugin.

70s sound, modern features
The warbly analog magic of an outboard tape delay could be considered the polar opposite to the precise, almost clinical environment of recording software. Thanks to the efforts of Arturia’s engineers, you can now mix these two worlds, and enjoy some seriously modern features as well.

Half a century of hit-making tone, right in your DAW. Push hard for that saturated, soft-clipping sound that cuts through any mix; get the tonal balance just right at the input stage; add vintage analog warmth in your mastering chain; use the in-built mid/side processing to enhance your whole mix. Compatible with all major DAWs, now you too can enjoy the harmonic push, subtle overtones, and tone-shaping power of the most iconic studio gear ever made.
Specifications
GeneralSound Library Minimum System Requirements