false
Contactless Curbside Pickup and in-store shopping available at select locations   Get Details
Due to COVID-19 we are focused on protecting the safety of our employees. We are accepting online orders but shipments may take longer than normal. You now have up to 180 days to return your gear if needed. Please stay safe. #keepthemusicgoing See all updates related to COVID-19
{ "pageType" : "item_page", "placements" : "5", "placementNames" : "rrt1,rrt2,rrCompare,rr1" }
{ "pageUrl":"GuitarCenterApp://ProductDetailsPage", "pageParams":"ID=site51274741923936107900" }
Top Seller 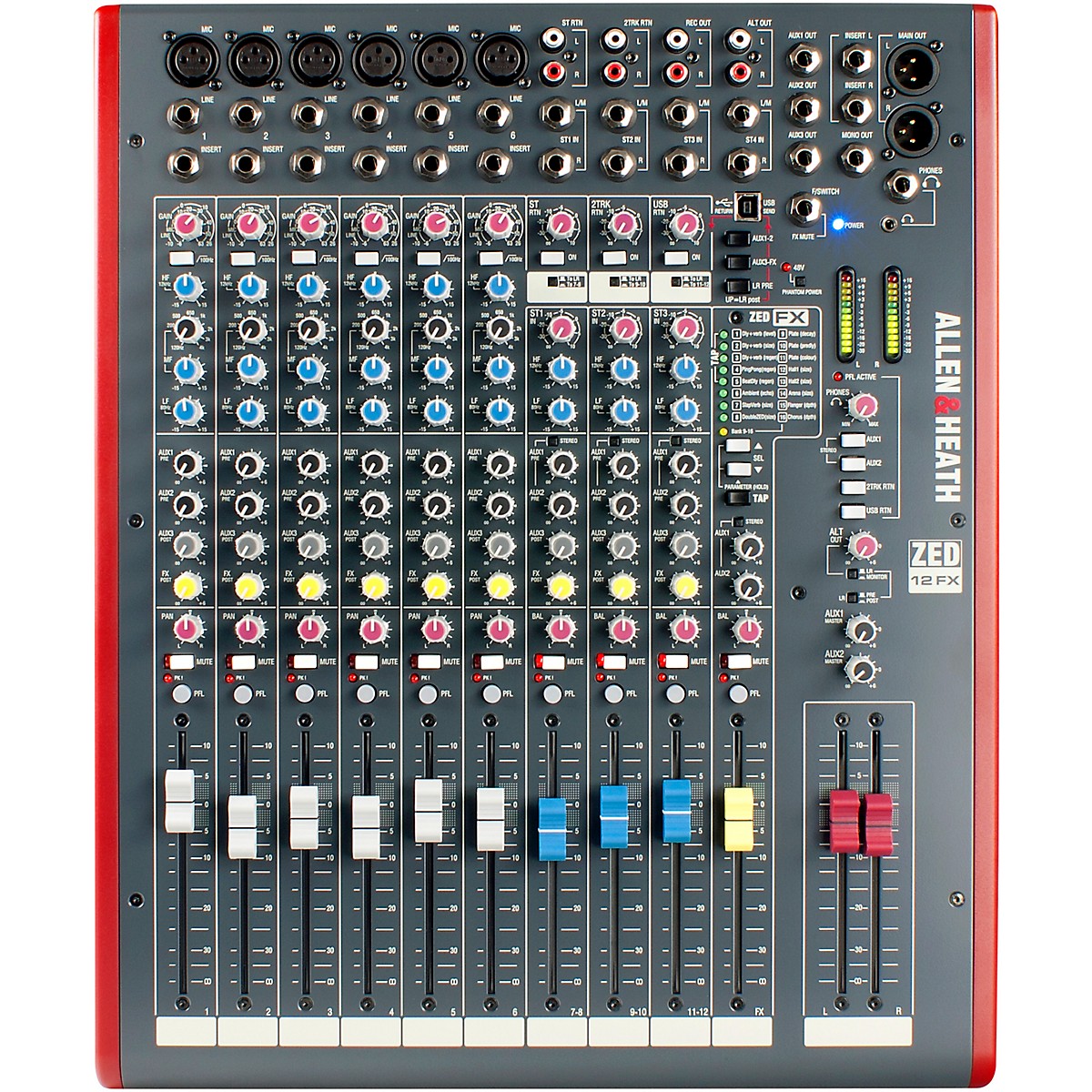 Complementing the Allen & Heath's ZED series, the ZED-12FX and its fellow FX series mixer have been developed around an FX chipset. Allen & Heath's DSP engineers worked hard, crafting and refining beautiful reverb algorithms. The 16 effects they created are available nowhere else-this quality and integration is only available in the ZED FX series. ...  Click To Read More About This Product

Complementing the Allen & Heath's ZED series, the ZED-12FX and its fellow FX series mixer have been developed around an FX chipset. Allen & Heath's DSP engineers worked hard, crafting and refining beautiful reverb algorithms. The 16 effects they created are available nowhere else-this quality and integration is only available in the ZED FX series. 16 essential time-delay effects add to the already bulging feature set. The ZED mixer is ideal for small groups who don't want to carry around an effects unit with their gear but who still want great quality FX at their gigs and on their recordings. In addition, the ZED-12FX USB mixer gives you DuoPre mic pre-amps, 100mm faders, and the MusiQ EQ section which are shared with the whole ZED range.

Internal FX
16 separate effects have been crafted into the ZED-FX range. These include Delay and Reverb, Ping-Pong delay, a selection of reverbs with different room/hall/arena properties, a flanger, and a chorus. All have been designed to complement the material the engineer is working with. Each of the effects has a parameter which can be altered: pre-delay can be adjusted, room sizes tweaked, and flanger speed dialed-in. Five of the effects can have their tempo tapped in, and the output auditioned by the FX PFL.

Inputs
One of the great things about Allen & Heath's ZED series is the number and variety of things you can plug in. In addition to the mixer's 6 mono channels, there are 3 dual stereo channels, each with a main stereo input on the jack sockets, and with the ability to take additional stereo inputs from phono sockets, or from the USB audio input. 6 mic/line channels are provided on the ZED-12FX-plenty for mics or DI boxes for a small band, duo, or solo performer, as well as 4 stereo line inputs-dual inputs, both with gain and 2-band EQ.

DuoPre
Based on the proven preamps from their PA series, Allen & Heath's ZED series has DuoPre preamps which use a two-stage design, with carefully controlled amounts of gain in each stage. When amplifying the signal from the XLR input, the gain range is huge-69dB of range to be exact-and is very evenly distributed around the gain control, meaning better control of signal level. Most of the gain comes from the first stage, so unwanted noise is kept to a minimum. Line level signals are simply plugged into the second stage of the preamp by using the line input jack socket, which has the great advantage of less noise when using the line input.

4 aux sends are provided, of which 1 & 2 are prefade for foldback monitoring, and 3 & 4 post-fade for effects sends. A stereo signal can be sent from auxes via USB-to-computer to create 2 separate record feeds independent of the main L/R mix (1&2) and or used as FX sends (3&4).

Getting audio to and from a computer easily is now a common requirement for live sound and music production. The way this has been implemented on the ZED FX mixers is flexible and easy. No longer do you need to fiddle around the back of your PC to get to the soundcard inputs only to find that the levels are all wrong and noisy. Just plug in a USB lead to your mixer, select the USB routing on the mixer and the device on your computer, and that's it. Three switches provide different send/return configurations for recording, playback, and utilising external FX.

The ZED-12FX has been designed using individual, vertically mounted circuit boards with each rotary control fixed with a metal nut to the front panel-making a much more robust product that will resist damage and give years of reliable use. It also has professional 100mm faders for ultimate control over your levels.

SONAR LE included
Allen & Heath teamed up with Cakewalk to bundle SONAR LE with the ZED 12-FX mixer. The two work together in many ways, from straightforward recording of a stereo mix to recording tracks individually to build up a song, or even for inserting a SONAR LE effects plug-in.

ZED FX Series
ZED FX mixers are easily controlled using 3 buttons and 9 LEDs. Quickly tap the ideal delay time or dial in the perfect amount of reverb on the lead vocal. Talk about one-stop navigation and editing, it's just as easy your average effects pedals. Hold down the TAP button and press the up or down button to alter the effects parameter. For example, on patch (9) Plate, this would adjust the decay length. The ZED FX mixers are designed to fulfill all the functions a small band would need without needing their own sound engineer. The layout and features have all been arranged to be logical and instantly recognisable even at a dark gig to make it a mixer you can trust to perform.

The USB audio interface, with its uniquely flexible capability, allows different signals to be sent to USB, from L/R or from selected aux buses. The USB return signal can be routed straight to the L/R mix or to a stereo channel. The connectors are placed on the top surface for easy plugging & patching, and the construction, with individual circuit boards firmly nutted to the top panel, is as rock solid as Allen & Heath's top-of-the range ML Series mixers.