false
Contactless Curbside Pickup and in-store shopping available at select locations   Get Details
Due to COVID-19 we are focused on protecting the safety of our employees. We are accepting online orders but shipments may take longer than normal. You now have up to 180 days to return your gear if needed. Please stay safe. #keepthemusicgoing See all updates related to COVID-19
{ "pageType" : "item_page", "placements" : "5", "placementNames" : "rrt1,rrt2,rrCompare,rr1" }
{ "pageUrl":"GuitarCenterApp://ProductDetailsPage", "pageParams":"ID=site51500000000007063" }
Top Seller 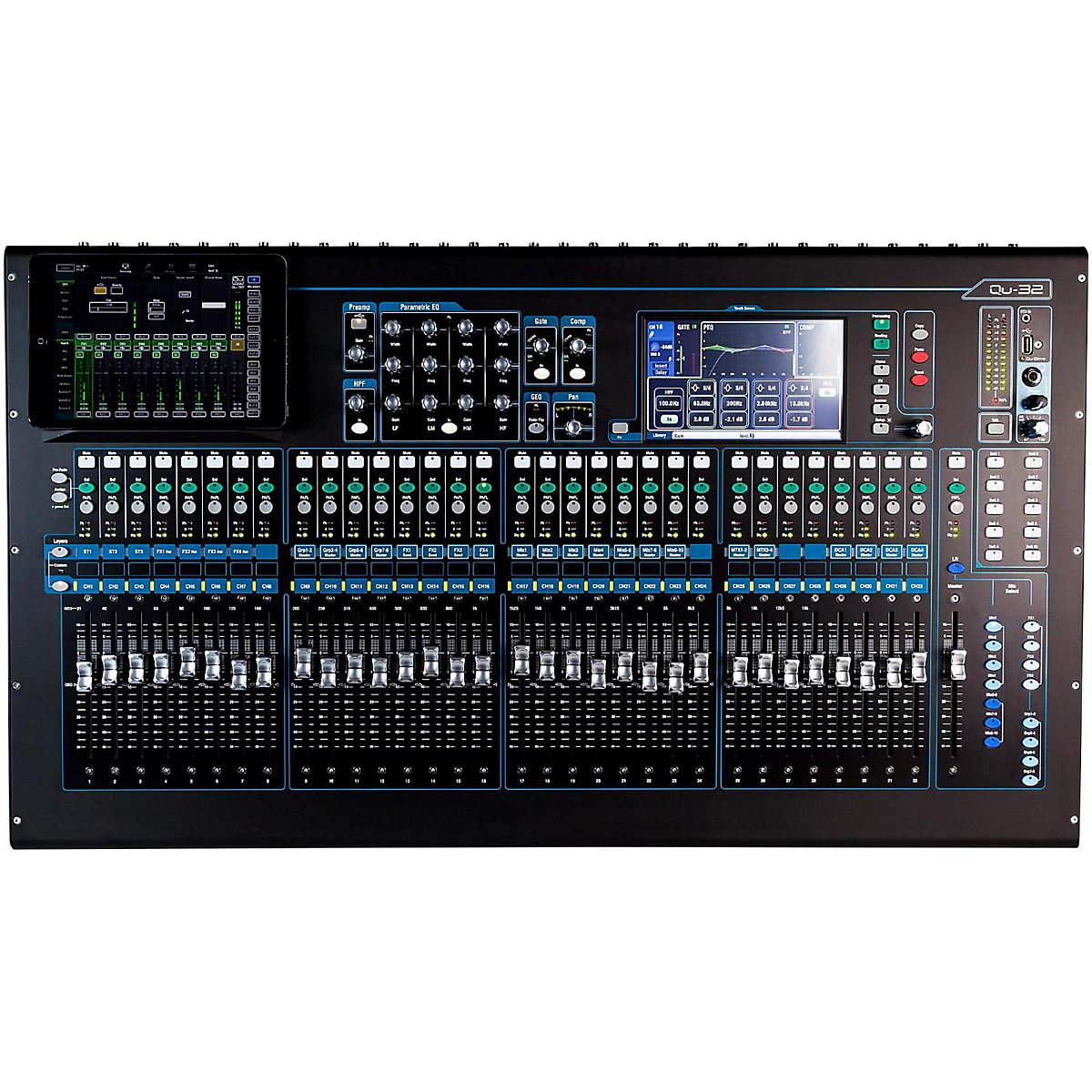 With its responsive touchscreen, 33 motor faders and recallable preamps, the Qu-32 digital mixer combines a user-friendly interface with class-leading performance to create a powerful tool that puts you in full command of the mix for perfect sound every time. Key features include professional factory microphone presets from Shure, Audio Technica an...  Click To Read More About This Product

With its responsive touchscreen, 33 motor faders and recallable preamps, the Qu-32 digital mixer combines a user-friendly interface with class-leading performance to create a powerful tool that puts you in full command of the mix for perfect sound every time. Key features include professional factory microphone presets from Shure, Audio Technica and Sennhieser, Windows DAW control support and enhanced iPad app functions. You'll also enjoy the versatility of the Qu-Control customizable app as well as the Qu-You personal monitoring app.

ANALOGIQ PREAMPS
The Qu-32 Chrome Edition features 32 AnalogiQ total recall preamps with zero crossing detection and an advanced padless dB step gain stage. The AnalogiQ design has been refined to offer superb transparency, minimal distortion and an ultra-low noise floor, with a warm, musical sound that is missing from many digital consoles.

THE SUPERSTRIP
The Qu-32's key processing tools are presented in a clean layout on the SuperStrip, with one function per physical control. The SuperStrip is complemented by an onscreen Touch Channel for intuitive access to full processing parameters without clutter or complex menu structures. Processing for Mono and Stereo inputs includes trim, polarity, HPF, gate, insert, 4 band PEQ, compressor and delay. The main LR and the Mono mixes have controls for Insert, 1/3 octave GEQ, compressor and delay. The Stereo mixes provide Insert, 4-band PEQ, compressor, delay and balance control.

FADER AUTOMATION
The Qu-32 features 33 motorized ALPS faders, 32 arranged over 2 layers, allowing instant access to all channels and masters in a compact space, plus a dedicated master fader that dynamically follows the mix selection. A third, Custom layer is available for ad-hoc user strip layout, where any combination of Inputs, FX Sends, FX Returns and Mix masters can be assigned.

USB AUDIO STREAMING
The Qu-32’s built-in interface streams multitrack audio to your Mac or Windows computer. Any combination of Inputs and Mixes can be patched to the USB interface. The returns from the computer can be assigned to the Input channels. The interface is class-compliant on Mac OS X – which means it’s truly plug ‘n play, with no need to install a driver. An ASIO / WDM driver is available for Windows computers.

Standard MIDI control is tunneled over the USB connection so you can easily map the faders to the tracks of your favorite DAW. Additionally, the DAW Control driver for Mac OS X enables better DAW integration via HUI or Mackie Control emulation.

QU-DRIVE
An integrated multitrack USB recorder provides 18 channels of 48kHz/24bit recording and playback straight to and from your USB hard drive. Multitrack audio can be played back to the mono input channels 1-18., Qu-Drive also provides stereo recording, patchable from any pair of mix outputs, the main LR (pre, post, or summed to mono) or even the PAFL bus, with 2- track stereo playback to ST3.

QU-PAD
Add the Qu-Pad iPad app to your Qu setup and you’re free to adjust the monitors on stage, roam around the venue whilst tweaking the PA, and then mix the show from the heart of the audience. It also offers a full scene manager, effect parameter control and remote patching and routing capabilities. You'll also enjoy full control over Qu-Drive and DAW transport. Qu-Pad connects to the mixer over Wi-Fi and gives instant access to all live mixing parameters and settings. Qu-Pad requires the connection of a Wi-Fi router or access point to the Qu-32 Network port.

The Qu-32 is fully compatible with our ME Personal Mixing System. Any number of ME-1 personal mixers can be chained from the dSNAKETM port (or from an AR2412 Stagebox if you’ve got one connected to the dSNAKETM port). Each performer can be given tailored control over their own mix, leaving the engineer free to focus on the audience experience.

DSNAKETM
The Qu-32 is a self-contained mixer, so if you’ve already got the analogue cables you’re good to go. If you’re thinking of trading in the copper multicore for a Cat5 digital snake, Qu-32’s dSNAKETM port has you future-proofed, allowing connection to our AR2412, AB168 and AR84 AudioRacks. dSNAKETM is our proprietary networking solution, boasting a transport latency of only 105us over cable runs of up to 120m / 390’. So if you’re mixing FoH you can place your I/O on the stage and run a single Cat5 cable back to the Qu-32 in the mix position.

4 STEREO GROUPS
Groups 1-8 are typically used as subgroups to LR for level masters and/or processing, for example to compress a drum kit or to tame multiple lavalier microphones with a single graphic equalizer. Groups can be switched to Mix mode, typically to provide additional monitor mixes.

THE MATRIX
The Qu-32’s Matrix adds 2 further stereo outputs equipped with full processing to the console’s extensive I/O. It is a ‘mixer within a mixer,’ fed from any combination of Group 1-8, Mix 1-10, and main LR. It can be used to provide a broadcast feed, a recording mix, or duplicate the main outputs for delay stacks and fill / zone speakers where independent GEQ and delay is applied.