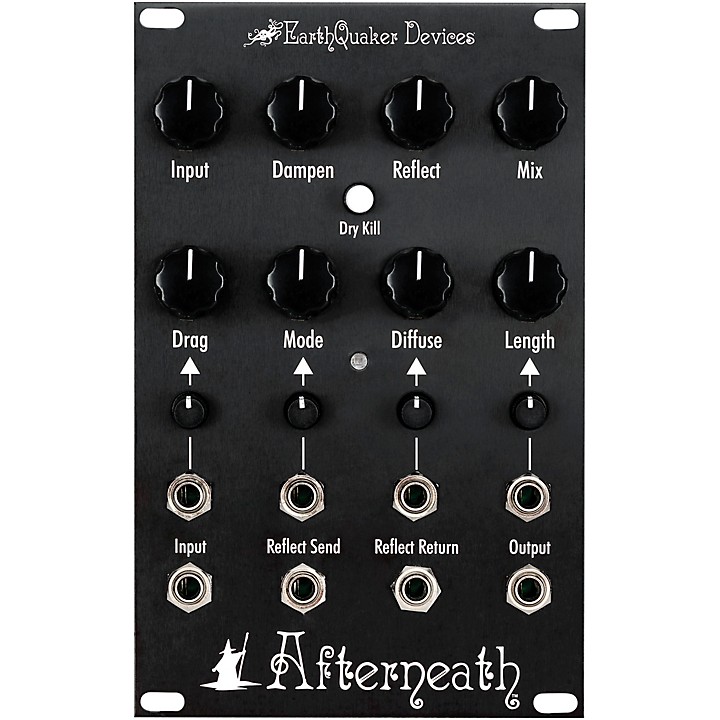 Notify me when this item is in stock.
Protect your gearLearn more
Cover drops, spills or cracks with Pro Coverage
Hey there. How can we help you out?We're here for your gear needs.
866-498-7882
See All EarthQuaker Devices Synthesizer Modules

The EarthQuaker Devices Afterneath Eurorack Module brings the otherworldly reverb/delay sounds from their acclaimed Afterneath effects pedal into your modular synthesizer with an expanded feature set. The new features in the Afterneath Module transform the original stompbox into an ambient powerhouse and an instrument unto itself. The Afterneath Module features one main audio input, one main audio output, an audio send and return for the Reflect feedback path, and nine controls. Four of the parameters are controllable via CV, and each is equipped with a dedicated inverting attenuator. The Afterneath Module has a completely analog dry signal path and a totally digital wet signal.

The Afterneath Module builds upon the EarthQuaker Afterneath pedal with the addition of voltage control over the Diffuse, Length and Drag controls. They have also added an entirely new voltage-controlled Mode parameter that changes how the Drag responds to knob and CV changes. When adjusting the Drag via the knob or CV, you will notice a change in character, fidelity and decay length of the effect. There is also a noticeable change in pitch for the sound that is in the Afterneath’s buffer. As with the Afterneath pedal, high settings of the Reflect and Length controls result in self-oscillation, where the pitch of the oscillation is set by the Drag control.

There are nine modes that govern the behavior of the Drag control and its effect on the pitch of the sound in the buffer:


Beyond modulated delay and reverb effects, modes 3–9 extend the possibility of using the EarthQuaker Afterneath Module as a voltage-controlled oscillator. Another new feature in the Afterneath Module is a Dry Kill switch that allows access to a 100% wet signal. This is perfect when you are using the module as an effect send from your mixer or DAW.

Last, but certainly not least, EarthQuaker added a Reflect Send and Reflect Return jack. This not only allows external processing of the Afterneath’s Reflect feedback path, but also gives the user access to a phenomenal pseudo-stereo effect. In addition to patching from the main output, you can also patch from Reflect Send jack (For example, using the main audio output as your left channel, and the Reflect Send as your right channel). This provides a wide, immersive, ambient stereo image. This is a great trick for when using the module as an effects send for your favorite modular, mixer or DAW. Additionally, the Reflect Return jack can be used as an additional audio input. The Reflect knob will act as an attenuator for any signal that is patched into the Reflect jack.