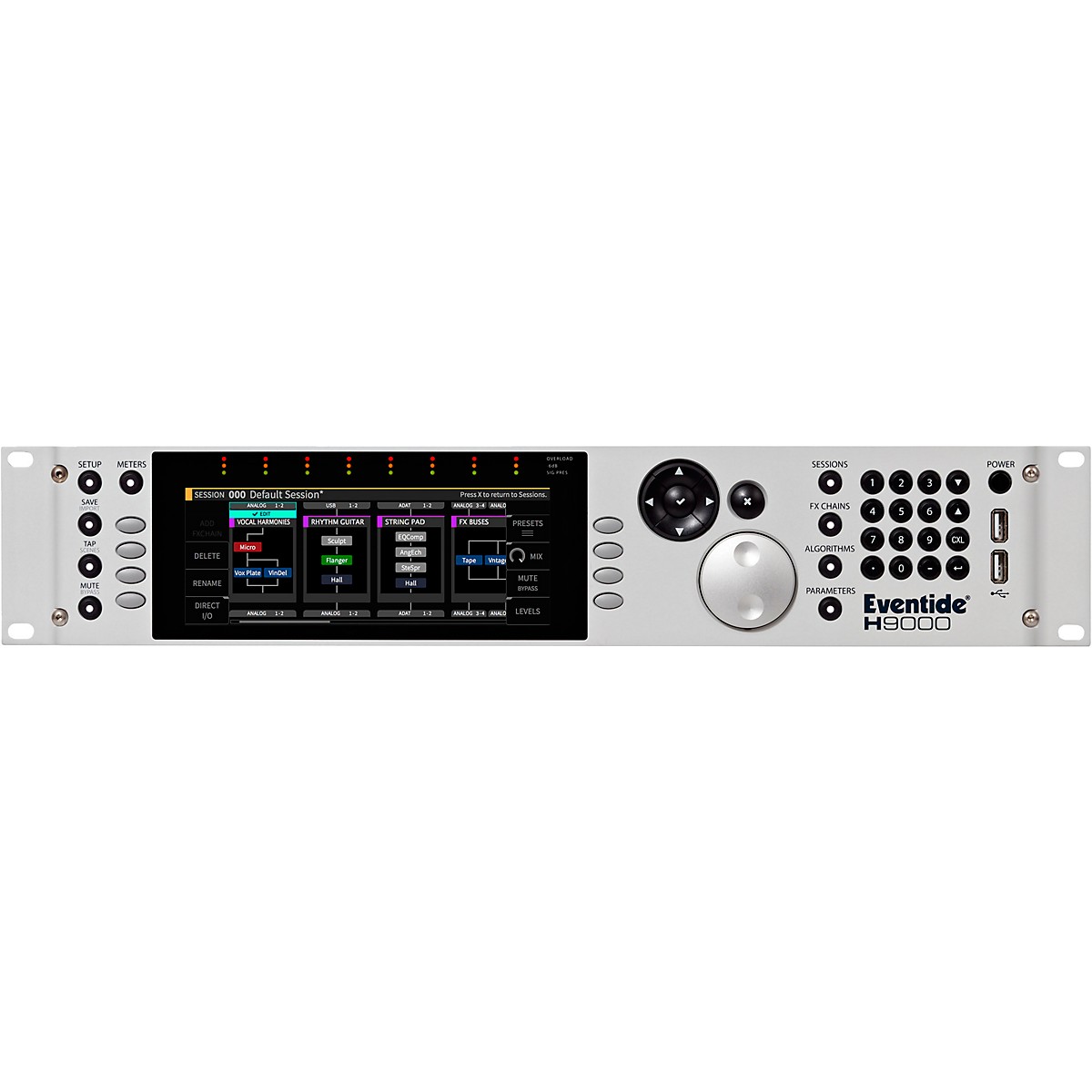 Eventide's flagship multi-effects processor, the H9000, continues in its unbroken tradition of delivering industry-leading signal processing power to the pro audio community. The H9000 comes loaded with 1600 unique algorithms from recreations of beloved classics to Eventide's latest and greatest effects. Catch the WaveThe H9000 is riding the c...  Click To Read More About This Product

Have Questions? 866-498-7882
Call our experts for product info and phone-only specials.
{"product":{"sku_rep_id":"site51500000216750","gc_pro":false,"sku_id":"L54667000000000","sku_display_id":"1500000216750","rep_id":"site51500000000210311","download":false,"price":"6999.00","checksum":"2607767932810","name":"Eventide H9000 Digi Effects Processor","id":"L54667","displayId":"1500000000210311","stock":"outofstock","brand":"Eventide"},"dept":"Pro Audio","category":"Signal Processors","subcategory":"Multi-Effects Processors","pageName":"product_detail"}
{"loop":false,"lazyLoad":true,"jqueryLazyLoad":true,"rewind":false,"slideBy":"page","dots":true,"responsiveBaseElement":"#item_page_rr1","responsive":{"0":{"items":2},"568":{"items":3},"768":{"items":4},"900":{"items":5},"1158":{"items":6},"1340":{"items":7},"1500":{"items":8}},"nav":true,"itemElement":"li","stageElement":"ul"}
Overview
Eventide's flagship multi-effects processor, the H9000, continues in its unbroken tradition of delivering industry-leading signal processing power to the pro audio community. The H9000 comes loaded with 1600 unique algorithms from recreations of beloved classics to Eventide's latest and greatest effects.
Catch the Wave
The H9000 is riding the crest of a wave that’s about to sweep over the audio industry - multi-core general purpose ARM processors. Compared to conventional DSP chips, ARM processors deliver more processing per dollar and they significantly streamline new algorithm development. The migration to ARM represents an unprecedented investment for Eventide, an investment that far exceeds any other in Eventide's long history. ARM chips are engendering new, previously unimaginable audio effects and audio applications.
The H9000's quad-core ARM processors reside on four upgradeable modules. In the future, as new, more powerful ARM chips become available, the H9000’s DSP modules can be upgraded. The H9000 is 8 times more powerful than the H8000FW, and 16 times more powerful than Eventide’s popular H9 stompbox. It can run 16 simultaneous heavy duty algorithms.
Colossal Audio I/O
Audio I/O includes: 8 channels of pristine analog audio, 16 channels over USB, 8 channels of AES/EBU, ADAT optical and  S/PDIF. Plus optional network audio I/O via 3 expansion card slots with up to 32 channels of bidirectional audio each. (Dante and MADI available now, additional expansion cards are under development.)
With up to 96 channels of simultaneous signal processing and a generous complement of analog and digital audio I/O, the H9000 is the perfect platform for surround sound and for processing many tracks of audio simultaneously.
Legendary Sounds, New Paradigms
The H9000 comes loaded with 1600 unique algorithms from the H8000 and the H9 with over 500 presets covering reverb, delay, modulation, pitch shifting, distortion, and more. Multi-channel algorithms include 5.1 halls, chambers, plates, rooms, booths and various ambient spaces.
In addition, the H9000 introduces the concept of FX Chains for connecting any set of four effects with user-defined, flexible routing. FX Chains can be created to act as a channel strip, a guitar 'pedal board,' a modular synth with effects, etc. The H9000’s FX Chain paradigm is like a custom channel strip on steroids allowing any four complex algorithms to be combined and routed to taste. FX Chains are invaluable for quickly exploring various combinations of effects to achieve new and inspiring sounds.
Intuitive, Powerful Interface
The H9000’s big wheel is custom machined and has been carefully weighted to give it the right amount of inertia when spun. The H9000’s custom designed buttons were chosen for their particular tactile response. And the H9000’s large, crisp color display is driven by a dedicated ARM processor to ensure that the H9000 feels fluid and responsive when used.

Functions
Functions in the H9000 act much like Macros in Ableton Live; essentially, they are higher-level groupings of parameters that can be adjusted with a single knob. Up to 8 functions can be created in each FX chain.
Scenes
Scenes are a high-level function used to control sequenced program changes in the H9000. This mode can be useful when you are using the H9000 in a live environment such as a concert or theatrical production, and wish to “step through” different pre-configured states in a certain order you have set up in advance. For example, the main vocalist in a concert may need different reverb effects and parameter settings at different times during the show; scenes provide a quick, simple way to achieve this.
Meters
The H9000 has extensive metering capabilities to allow you to monitor every node in your signal's path. A physical eight channel LED meter bridge sits above the display. You can assign the LED meter bridge to provide instant visual status on the inputs or outputs that you choose. In METER mode, the display lets you monitor the input and output of all of the physical I/O as well as all the FX Chains running on the H9000.
Direct I/O
Direct I/O allows you to use your H9000 as a network attached I/O box, making the H9000’s pristine analog converters available for highest quality analog I/O. Even when you do not require any of the external processing the H9000 can provide, the 8 analog input and outputs, along with their different routing options, allows the H9000 to work as a network-attached patch bay.
Word Clock
The H9000 can serve as your digital system's master clock or slave to a master clock at sample rates from 44.1kHz to 96kHz.
Presets in Your Pocket
Plug a standard USB thumb drive into any of the USB ports to save or restore your presets. This feature makes your presets portable allowing you to load them into any H9000 in any rack anywhere.
Network Connectivity via LAN or WiFi
Connect your H9000 to your network with an ethernet cable or wirelessly using the supplied USB dongle for connecting to our remote control app, emote, for software updates, for adding new algorithms and more.