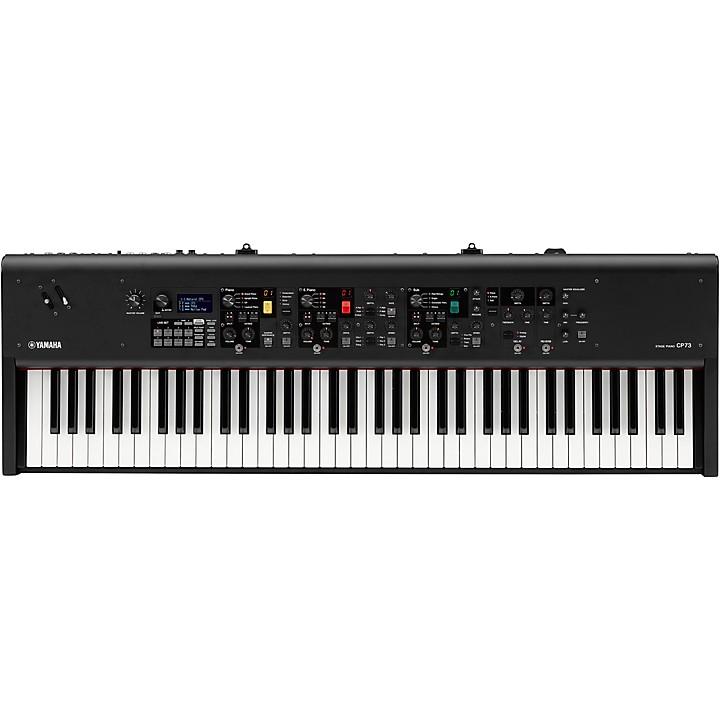 Notify me when this item is in stock.
Protect your gearLearn more
Cover drops, spills or cracks with Pro Coverage
Hey there. How can we help you out?We're here for your gear needs.
866-498-7882
See All Yamaha Stage Digital Pianos

The Yamaha CP73 stage piano has been expertly crafted with over 100 years of piano-making experience and 45 years of synthesizer innovation. This 73-key, E-to-E keyboard features authentic acoustic and electric sounds, combined with a realistic piano touch any player will love. The CP73 was designed with the gigging keyboardist in mind and features an intuitive control panel that’s quick and easy to navigate while performing. This piano is light enough to travel, but was made tough enough to withstand adverse conditions on the road. Not only does the CP73 excel for stage performances, but it can also be the ideal centerpiece for any studio environment.

At the core of the CP73 is Yamaha’s renowned AWM2 sample-based sound engine powering some of the most beautifully sampled pianos Yamaha has ever recorded. There are three premium concert grand pianos built into the CP73, including the Yamaha CFX, Yamaha S700 and the Bösendorfer Imperial 290. In addition to these exquisite concert grands, the Yamaha CP73 also features popular upright pianos and electric pianos, including the U1, one of the most popular uprights in the world, and the 73 Rd with its warm, vintage tone. You also get a wide range of warm pads, lush strings, deep synth basses, synth leads, brass and more. The CP73 also incorporates Yamaha’s VCM (Virtual Circuit Modeling) technology, capable of re-creating the sound and behavior of vintage effects and high-end studio signal processors by modeling the circuits down to the original analog component level. Taking the needs of the modern musician in mind, CP73 is the first CP to feature updatable Yamaha-produced, high-quality sound content, which will include new pianos, keyboards and more.

Informed by over 100 years of Yamaha’s experience making pianos, the 73-key balanced-hammer action on the CP73 is great for playing electric pianos. Combined with the AWM2 sound engine, you get the authentic experience of playing a real vintage instrument. It also features an E-to-E keybed that’s perfect for playing in a band alongside guitar and bass. The balanced, 73-key action is also useful when playing with a variety of sounds from acoustic piano to organ or even synth. It also makes the CP73 compact and lightweight to go anywhere and fit on any stage or in any studio setup. The feeling of an instrument is vital to how you will interact with it, and the CP73 will keep performers engaged on stage and songwriters inspired in the studio.

The one-to-one interface on the CP73 gives you immediate access to all of the piano’s controls. There’s no menu diving or searching through pages of features to find hidden parameters. Everything is right in front of you for total control of your sound during performances on stage or during fast-paced studio sessions. The intuitive CP interface allows fast and easy splits, layers and sound-shaping directly from the front panel. All of the thought-out plans of the CP73 design are aimed at keeping the creativity flowing. The CP73 has all of the modern connections you’ll need for today’s stage or studio environments, including USB MIDI and audio connectivity. It’s also among the lightest and most compact instrument in its class, weighing only 29.9 pounds.