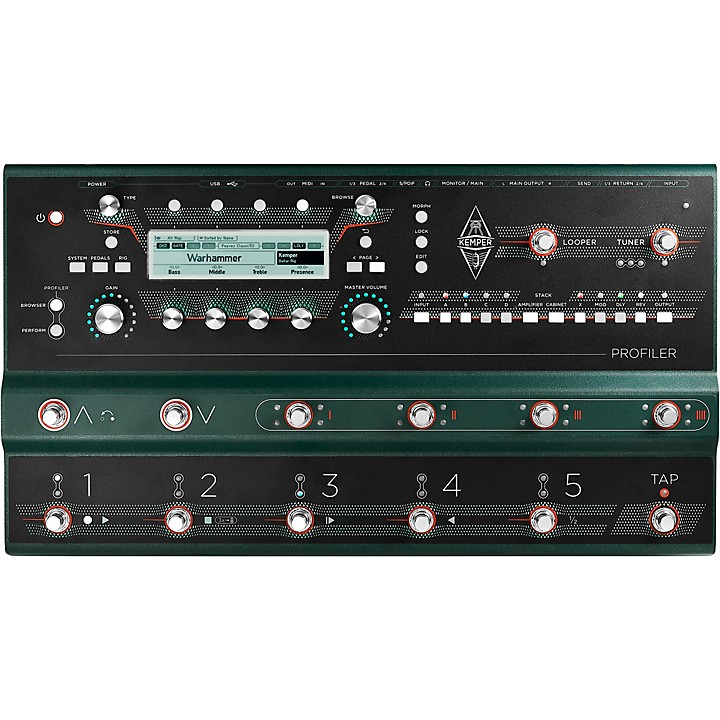 The Kemper Profiler Stage amp and processor is a multi-effects powerhouse and state-of-the-art guitar amplifier. Essentially combining the traditional Profiler with the Kemper Remote, the Profiler Stage allows users to easily control and program performances, as well as manage rig switches and complete parameter morphs, all with an intuitive interface. Featuring Kemper's unique Profiling technology for capturing the sonic DNA of any guitar amp, the Profiler Stage also comes preloaded with hundreds of the best guitar amps in the world, created under perfect conditions in professional studios worldwide. The Kemper Profiler Stage includes dedicated stereo monitor outputs for driving either two full-range or standard guitar cabinets simultaneously and independently from the direct stereo feed. Two stereo effect loops with stereo returns for each allow for connecting both pedals and outboard studio effects. This beast of a unit is available now at Guitar Center.


All-In-One Solution for Any Gig

Out of the box, the Kemper Profiler Stage sounds practically identical to the traditional Kemper with the same effects, performance mode, looper and tuner functions. However, unlike the original Kemper, the Profiler Stage amp allows for use in live performances without requiring additional gear or cables.


Take Custom Tones on the Road

Sometimes an amp has the perfect tone but is too old or heavy for a use in a live performance. The Kemper Profiler Stage amp makes it possible to match tones from any amplifier and recreate them on stage in a convenient, portable package. It’s like a portable library of rare, high-end and personal favorite amplifiers all in one place.

The Kemper Profiler Stage includes four Effect buttons that can be assigned individually per Rig. Use these to toggle pre- and post-amp FX, plus Action and Freeze functions such as Delay Infinity. Setting them up is easier than putting a new contact into your cell phone.


Go From Vintage to Modern In An Instant

One of the best things about the Kemper Stage amp and processor is that it provides the ability to switch sounds with the simple touch of the footswitch. Guitarists can easily go from the sound of a vintage Tweed Fender to a high-gain Marshall in the blink of an eye, creating virtually limitless tonal possibilities.

The Kemper Profiler Stage amp and multi-effects processor is not a modeling amp. Where a modeling amplifier leaves players stuck with specific settings, the Profiler Stage lets guitarists match their own favorite amps and take that sound on the road, ready for any gig.
Features