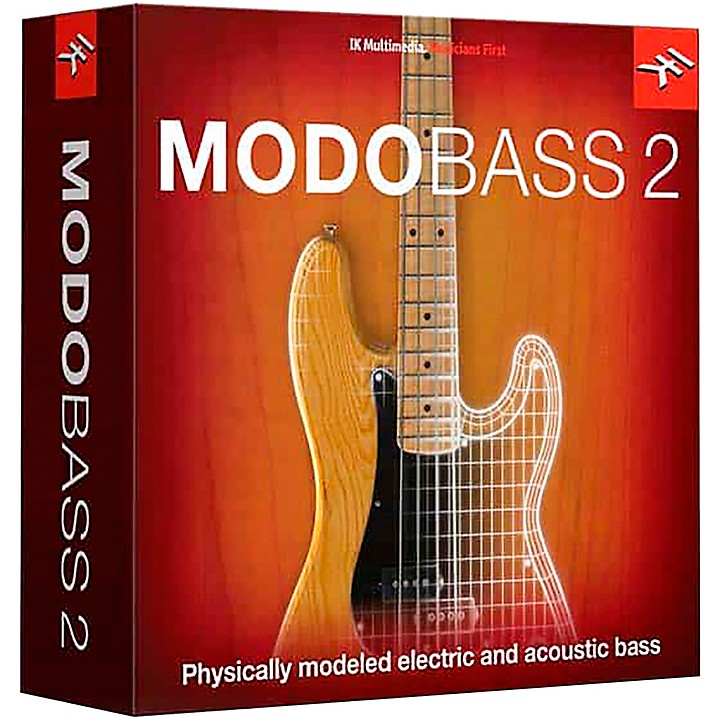 As producers, we all know how important it is to have a great-sounding bass line. On-call 24/7, MODO BASS 2.0 offers the realism and sound of a sought-after instrument being played by a master musician, but with the convenience of a plug-in virtual instrument.

MODO BASS is still the first and only technology of its kind that models the entire process of playing bass. Unlike traditional sample-based virtual instruments, MODO BASS uses modal synthesis technology to breathe life into your bass tracks. MODO BASS recreates each string’s response to the action of the "player" on certain areas of the string surface, and the interaction of the string with the fretboard, body and pickups of the bass instrument. Then using IK’s analog modeling expertise, the amp and effects of an electric bass rig is added to the sound chain.

All of this gives MODO BASS the ability to create sound in real time providing you the ever-changing, hyper-realistic bass sound you need. And since it doesn’t use samples, you’ll have more hard-drive space for your music.

22 Models for Variety of Bass Sounds

MODO BASS 2.0 includes the 14 original iconic basses plus eight exciting new ones to cover any style of music. You’ll find six new eclectic models, including two legendary fretless basses plus two double-bass instruments. And with the power of MODO you can turn any standard bass into a fretless model for even more sonic options.

The new PATTERNS section offers smart filters to browse by genre, song section, length, time signature and more. You can instantly audition any pattern to quickly find what you need, whether it’s the backbone of a full song or just a handy solo lick to lead into your next song section. All patterns were performed by pro bass players with a groove and feel in MODO BASS that are indistinguishable from the real thing.

Want to give your bass track a lift? Try going fretless. MODO BASS 2 adds the ability to make any bass in your collection a fretless model. It’s an impressive feature you won’t find anywhere else, instantly adding a distinctive vibe to your bass sound without the intonation challenges players face on a fretless. Explore the tonal possibilities of this game-changing new control.