Gear returned in mint condition. If you're looking for a virtually new instrument in possibly less-than-perfect packaging, this is a great value.
Gear returned in great condition, with only minor signs of use, such as slight scuffs or pick marks. It looks and plays like new and may be considered an equivalent to display units found in retail stores.
$99.99 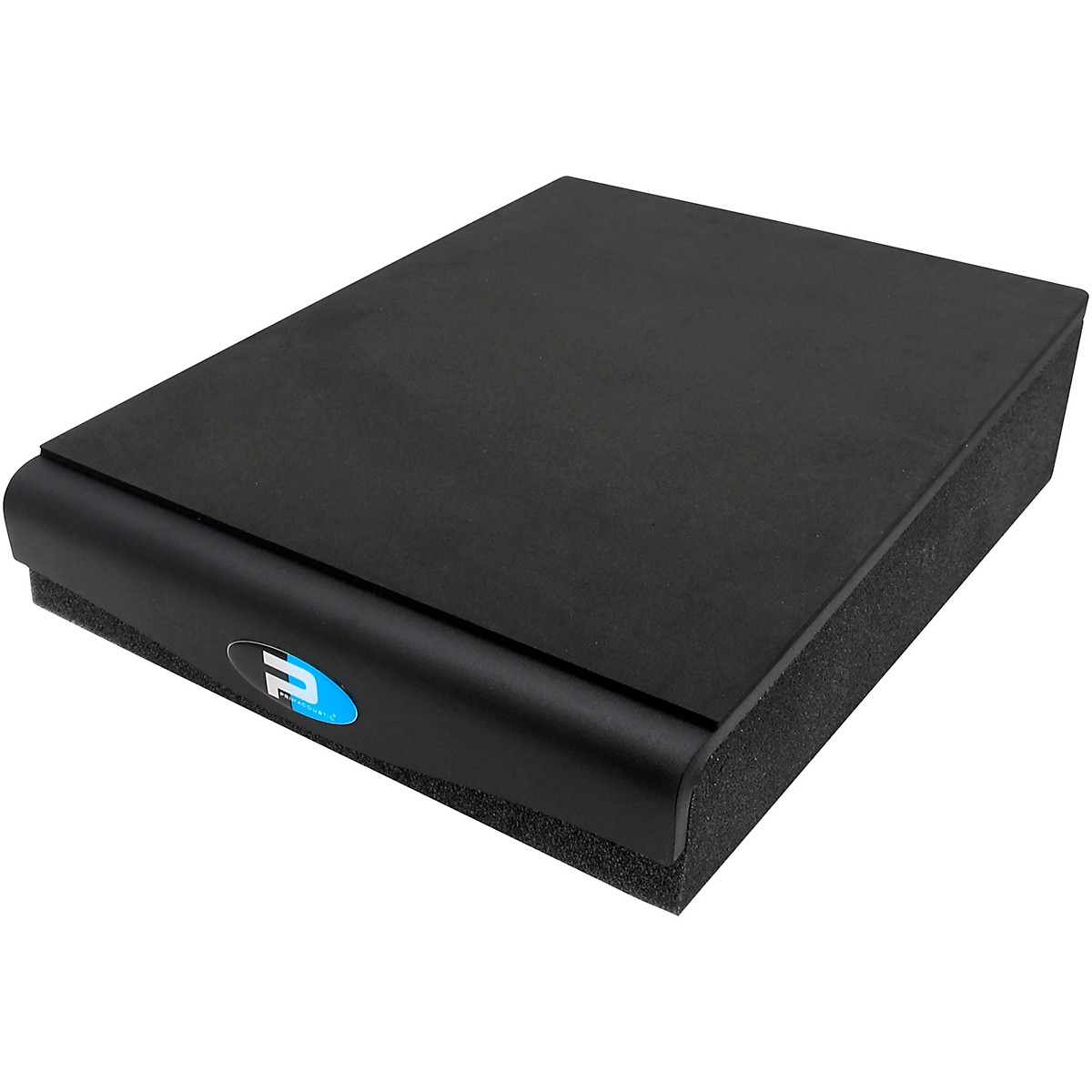 The Primacoustic RX7a Recoil Stabilizer is a unique speaker-mounting platform. The RX7a eliminates disruptive resonant coupling from the loudspeaker to the stand while providing a stable base that reduces the recoil caused by the forward energy of loudspeaker motion.The RX7a model has a top surface angled at 5 and fits many monitor models (listed b...  Click To Read More About This Product

WARNING: This product can expose you to chemicals including Carbon black (airborne, unbound particles of respirable size), which is known to the State of California to cause cancer. For more information go to www.P65Warnings.ca.gov

If one or more of the items you ordered weighs less than 1 lb. is shipping to a PO Box or, if the order is held for credit card verification, it may take more than five buisness days to arrive.
Wed Oct 21 08:00:00 PDT 2020 In Stock & Ready to Ship In Stock & Ready to Ship false MFI=3 true
In Stock
Most orders placed before noon ET ship same day (except weekends and holidays).
Order within Details
Free Shipping Shipping & Delivery Times

The Primacoustic RX7a Recoil Stabilizer is a unique speaker-mounting platform. The RX7a eliminates disruptive resonant coupling from the loudspeaker to the stand while providing a stable base that reduces the recoil caused by the forward energy of loudspeaker motion.

Made from three basic components, the Recoil Stabilizer is essentially a platform for the loudspeaker that features a high-density urethane base that isolates the speaker from the shelf, monitor-bridge or stand. This effectively decouples the loudspeaker to eliminate vibration-borne resonance to the substructure. A heavy laser-cut steel plate is added and sandwiched between the isolation layer and a no-slip neoprene top. The steel plate introduces significant mass to the structure and serves to stabilize the speaker.

By reducing the backward recoil energy as the speaker coil pushes energy forward, initial waveform transients no longer suffer lag and the sharpness of the resulting pulse is more defined. The result is significantly greater detail at all frequencies, with tighter bottom end and improved depth of field.

The RX7a Recoil Stabilizer is available in various sizes and weights to address different speaker designs and may be ordered in both standard and custom angles to precisely aim the loudspeakers for critical listening environments.


How It Works
Before getting into how the Recoil works, it is worth understanding some of the scientific principles involved and what problems they are actually solving.

Sound travels through air and other media in waves. These waves compress at various frequencies called wavelengths. Longer wavelengths tend to travel further while shorter ones travel in a more direct line. Longer wavelengths require more energy to generate and, once in motion, are very difficult to contain. With sufficient energy, long wavelengths will cause walls and floors to vibrate. Thunder shaking your house is a very good example of lots of energy applied to a low frequency.

Okay, so what does this mean in human-speak? Simply put, bass travels through just about anything while high frequencies are fairly simple to control. And has all of this got to do with near field monitors or reference loudspeakers? Those speakers produce bass and bass will transmit through the speaker stand to the floor, the walls and whatever is connected. This is called acoustic coupling. When sound vibrates in the speaker stands, they resonate and produce unwanted sound. To sum up, coupling causes a frequency bump at the resonant frequency that, in turn, changes the speaker's performance.

To solve the problem, engineers often employ urethane foam pads or other insulating materials under their nearfield reference monitors as a means to eliminate the resonance that occurs when the speaker and the speaker stand, (shelf or monitor bridge) couple. Good news: this does, in fact, effectively decouple the two devices. Bad news: it introduces a new problem that is best described as recoil.

Think of a rifle firing a bullet. The hammer strikes the firing pin which in turn causes the shell to explode, propelling the bullet forward. As the bullet pushes forward the rifle recoils backwards to absorb the energy. This is exactly what is happening when you place your speakers on a soft, spongy material; during a transient such as a sharp kick drum thump, the forward momentum of the speaker is dulled by foam as the soft malleable substance allows the speaker to tilt backwards and recoil. This recoil may be desirable when firing a rifle, but with a loudspeaker, the movement dulls the initial transient at the start of the wave, and the result is predictable: you lose clarity and detail.

What we really need is to both decouple the source and provide a stable platform.

The Recoil Stabilizer solves the problem by introducing a heavy mass on top of a high-density urethane isolation pad. By significantly increasing the mass of the base platform, the loudspeaker's forward momentum is no longer sufficient to move the platform backwards. It is stabilized and the recoil is significantly reduced.

If you think about it, this is exactly how a gyroscope works. Gyros are used in airplanes, torpedoes and missiles to stabilize the navigational system so that the device stays on course. By rotating a heavy mass very quickly (like the earth around itself--around the sun!) the centrifugal force retains the gyro's position relative to all axes. Since we need only control the effect from the speaker excursion in a single axis (front to back) we do not need a centrifugal force to steady the device, we can do the job with a simple, heavy steel platform that acts as the stabilizing mass.

This heavy platform is, in turn, sandwiched between the isolation pad and a non-slip neoprene layer. This works double-duty by providing the speaker with a comfortable resting place on which to sit while also working in symphony with the bottom urethane foam and mass of the speaker to dampen the steel plate. To further reduce self-resonance, a curved front panel aids in the process by varying the impedance, thus eliminating internal standing waves. This also adds more mass without increasing the footprint.

After many listening tests, Primacoustic found that a 4:1 ratio appears to work well whereby the mass of the Recoil should equal 25% or more of the loudspeaker being used. Primacoustic recommends using a 4:1 ratio whereby the weight of your monitor should not exceed more than four times the mass of the Recoil Stabilizer you intend to use. (i.e., if your monitor weighs 40 lbs., the recoil should weight at least 10 lbs.). You should also consider the firing angle and the positioning (vertical or horizontal). It is also a good idea to check the deck size to meet your monitor's footprint.

So there you have it.¦ By first isolating the speaker from the stand or shelf, you eliminate harmful resonance and by stabilizing the speaker by increasing the mass of the base, we directly affect the loudspeaker's inertia, and recoil is significantly reduced. The result: greater clarity and improved depth of field is immediately apparent. The Recoil Stabilizer is likely the most cost-effective means to improve reference monitor accuracy for engineers at all levels.

"My nearfield speakers sound better on the Recoil Stabilizers than they did without them. The bottom is solid, the vocals are clear and my speakers don't fall down. It's a great product."
Daniel Lanois
Engineer/producer - U2, Bob Dylan, Peter Gabriel, Emmylou Harris, Ron Sexsmith, Robbie Robertson

"The Recoil Stabilizers tighten up the bass incredibly and properly isolate the speakers from the console. My monitors are punchy and have more vibe. I haven't stopped using them."
Dave Bottrill
Engineer/producer - King Crimson, Silverchair, Tool, Godsmack, Staind, I Mother Earth, Dream Theatre

"With Recoils in place, the speakers seem to sonicly float, the low-end is more defined, and I hear fundamentals that I never thought were there. The Recoil's brought new life to my nearfields - they have never sounded so good!"
Bil VornDick
Engineer/producer - Bela Fleck, Alison Krauss, Jerry Douglas, Marty Robbins, Mark O'Connor

"A noticeable improvement in the sound with better imaging and a better controlled low end¦ the Recoil Stabilizers are the best isolators I have tried so far."
Paul White
Editor - Sound on Sound magazine

"As soon as I replaced the foam wedges I had under my speakers, I heard a noticeable difference: The Recoils instantly sounded and looked way cooler. F¦ing Awesome!"
Butch Walker
Engineer/producer - Avril Lavigne, Fall Out Boy, Pink, Sevendust, Hot Hot Heat, Simple plan, The Donnas

"I found the improvement to be dramatic¦ the mix as having much more depth - reverbs and panning were much more obvious. The Recoils offer a simple way to kick your monitor's performance up a notch!"
Dave Rideau
Engineer/producer - Jimmy Jam & Terry Lewis, Janet Jackson, Sting, TLC, Earth Wind and Fire

"I'm naturally skeptical¦but the Recoil Stabilizers are the real deal. They do a great job of decoupling the speakers and give more accurate bass and better imaging. It's not just a subtle difference, but an obvious improvement."
Craig Anderton
Editor - EQ magazine

"Elegant in principle, brilliant in execution¦. that's the Recoil. What it does is so simple, and the improvement you hear is so immediate, you have to say to yourself, why wasn't this invented years ago?"
Andy Hong
Gear editor - TapeOp magazin

"The Recoils are fabulous! The bottom is defined in a way I've never heard before. The really stunning thing is the way the pillowy, moophy bottom has tightened up. They have to be heard to be believed... certainly the most cost-effective upgrade one could make to improve monitoring."
Seth Glassmanagerie
Engineer/Producer/Session Player - James Brown, Diana Ross, Aaron Neville, Carole King