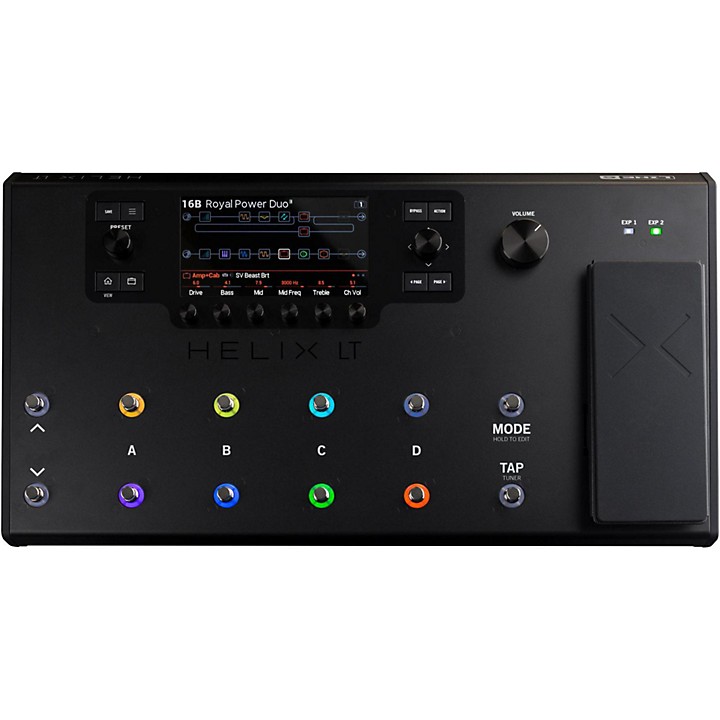 Authentic HX Modeling
Powered by the HX Modeling engine, Helix LT offers greater DSP power than any other multi-effects processor in its class. Tube amplifiers are recreated with authentic sound and feel—each amp component has been captured, measured and matched to the real thing. Mics, cabs and effects are recreated accurately and are designed to sound instantly recognizable if you’ve ever spent time in a studio. Helix LT also lets you load custom impulse responses to personalize your rig setup. With uncompromised Helix sound quality and 123dB of dynamic range, Helix LT ensures an authentic and responsive playing experience.

Acclaimed Ease of Use
The Helix LT processor delivers the advanced user experience similar to the Helix Floor and Helix Rack processors, with a clear and intuitive interface that enables fast tone creation and easy interaction—all with a minimal learning curve and the elimination of complex menu diving. A large color LCD lays out the entire signal chain and provides instant access to amp and effects parameters. Helix LT features the same touch-sensitive footswitches as Helix Floor and Helix Control, allowing you to select an effect block for editing simply by touching it. Color LED rings enable you to know what is assigned to each footswitch at a glance. Helix LT also has four stereo paths per preset, allowing you to design complex routing scenarios for each patch.

Keep Playing While You Tweak
Part of the goal in developing the Helix family of products was to allow guitarists to interact with technology in ways that are more intuitive, making the creation of tones easier. This means you won’t have to stop playing to tweak a knob. With Pedal Edit Mode, you can edit any parameter you like using your foot; just select the block and parameter you want to change and adjust its value using the expression pedal.

Easy-to-Use MAC/PC Editor
Like all hardware products in the Helix family, Helix LT presets can be created and edited using Helix Edit software for Mac and PC. The Helix Edit software allows you to drag and drop amps, cabs, and effects to build complex signal chains. Quickly reorganize, rename, edit tones and modify Performance View labels, instantly visualizing every detail of your editing workflow—all right on your computer.

Preset Compatibility With Helix Products
Featuring the same sounds, workflow and editor as the Helix Rack and Helix Floor processors, Helix LT presets are compatible with existing Helix products, including Helix Native plug-in software. This makes Helix LT an excellent option for guitarists who want a streamlined setup for live gigs or touring, or who want a backup for their Helix Floor or Helix Rack processor.

Regular Feature Enhancement
Line 6 is committed to continuing the evolution of the Helix family and responding to the needs of guitarists. Following the path of Helix Floor and Helix Rack, Helix LT customers can expect regular firmware updates that add amp and effect models, features to improve flexibility and workflow, as well as other software improvements.

Note: All product names are trademarks of their respective owners and neither Yamaha Guitar Group nor Line 6 are associated or affiliated with them. These trademarks appear solely to identify products whose tones and sounds were studied by Line 6 during sound model development.
Features
866-498-7882 English
877-687-5402 Español
Chat Now
Give Feedback