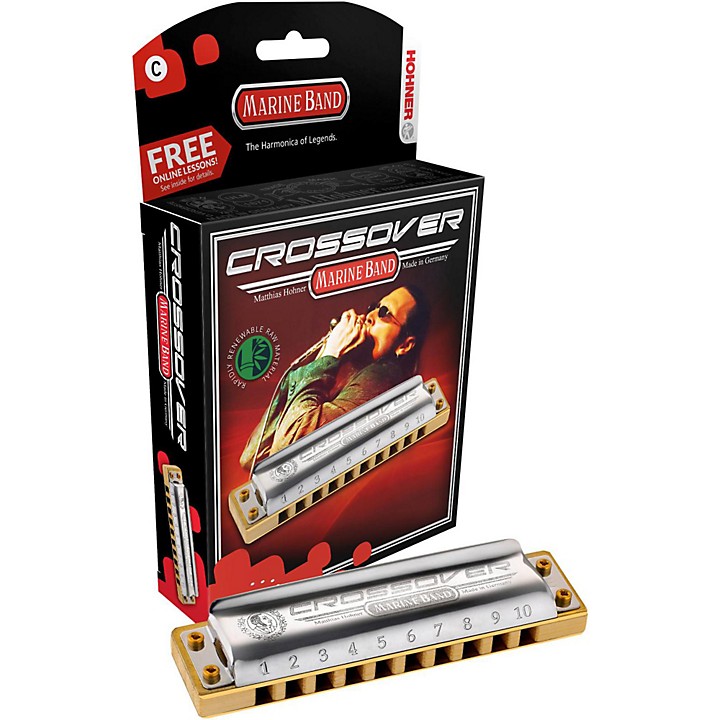 The Marine Band Crossover Harmonica's revolutionary laminated-bamboo comb is completely sealed, making it water repellent and exceptionally stable. In combination with the screw-together assembly, the Marine Band Crossover is extremely airtight, with fast, even response and a raspy, powerful sound that's exceptionally well-suited to amplified playing as well as acoustic styles.

Due to the Marine Band Crossover's compromise tuning, chord playing is smooth and full and the single notes also play nicely in-tune, so playing in positions other then 1st and 2nd is not a problem for intonation. Because of the airtight construction (a sealed comb and screws instead of nails to attach the reedplates), bending, overblows, and overdraws are much easier then on most other diatonic harps. This is great news for beginners learning to bend and speedsters and overblowers out there looking for an airtight harmonica that can keep up with their playing.

Dave Gage: "One of the best-sounding and playing diatonic harmonicas out-of-the-box. Great for players of all levels and musical styles and worth the extra penny for the increased quality and playability. The sound is bright, but not overly bright. It plays as well as expensive, customized harmonicas."

Joe Filisko: "This Crossover is an exceptional harmonica. I have to say that this is without any doubt the best playing out-of-the-box harmonica that I've ever had my hands on. It's a notable, substantial upgrade to the diatonics I have played. It played very well. That's a big deal, because I trusted it. The tuning is superb; responsiveness is excellent. It's very responsive. The bends are right there."

Steve Baker: "As a Marine Band player for 40 years I really love the Crossover and am proud to have been closely involved in its development from the very beginning. The first time I played the very first prototype with a bamboo comb I was blown away by the sound, volume, response and playing feel and thought 'this is it!' I own a lot of custom harps, but this is what I use on stage because it's tough, reliable, and both plays and sounds great."

Jerry Portnoy: "The Marine Band Crossover is a terrific harp in every aspect: beautiful, sealed bamboo comb; strong, attractive cover plates and; most importantly, well tuned with good volume and projection; plus smooth, responsive playability from bottom to top. It also comes in a handy and unique zippered case. I've made it my personal harp of choice. Another winner from Hohner!"

Phil Wiggins: "It's beautiful. It is nice right out of the box. Great tone. Great feel. I'm loving it."

Dennis Gruenling: "I like the comb a lot: how it felt, how it responded, how it sounded. The feel and response is closer to a custom Marine Band."

R.J. Mischo: "The Crossover is a great instrument! I've been playing professionally since 1979 and have tried all the models and this is the best out-of-the-box harp yet."

David Barrett: "The Crossover is Hohner's best harmonica to date . . . great feel, playability, and most importantly, great sound! For those who want the great sound of our forefathers but the playability of a modern-designed harmonica, put Hohner's Crossover harmonica at the top of your shopping list."

James Conway: "I needed a five overblow and it was there. To get a rack-mounted, five overblow right out of the box-I was happy with that."

About Hohner:
Hohner is a family company founded in 1857 in Trossingen, Germany by Matthias Hohner. Hand-made quality and close attention to detail has set Hohner apart from the beginning. A top leading brand in harmonicas, Hohner harps are distributed worldwide. Hohner harmonicas are played on the street by buskers, in intimate nightclubs, on festival stages, and even in Carnegie Hall. Despite a diverse harmonica line used in music from country to classical genres, the most famous Hohner harmonicas are their simple, 10-hole diatonics used frequently by blues, rock, country, and folk musicians.
Features

How to Choose the Best Acoustic Guitar Strings