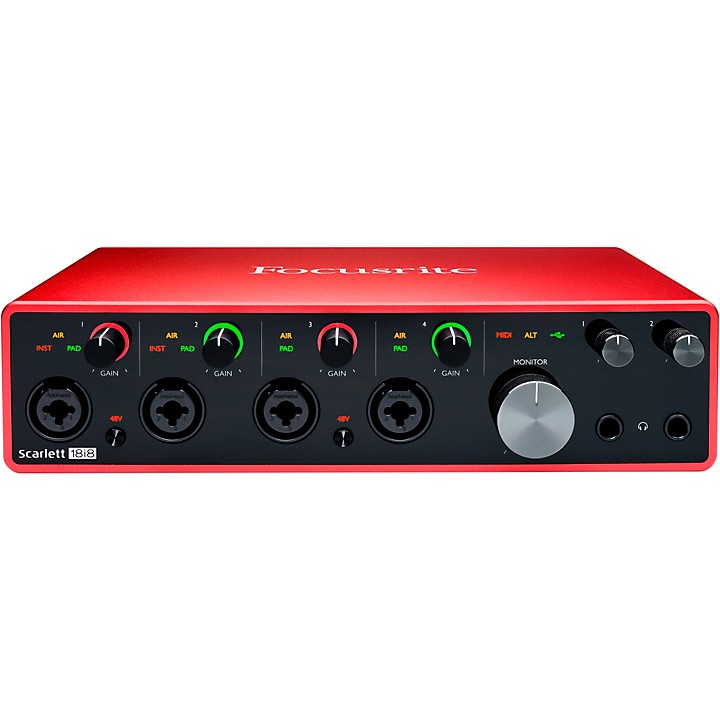 The third-generation Scarlett 18i8 is the perfect audio interface for recording engineers and producers who need to adapt to their recording environment, wherever they are.

It offers eight analog inputs: four mic/line inputs, two high-impedance, high-headroom instrument inputs and four additional fixed-line inputs on the rear. An optical input allows for expansion of up to eight additional channels for larger recording sessions. And with improved A-D and D-A conversion, your recordings and playback will sound clear and pronounced up to 24-bit/192kHz, vital to helping you perfect your mix.

Scarlett 18i8 features four of Focusrite’s best-ever-performing third-generation Scarlett mic preamps: with optional Air setting to reproduce the Air effect of their original ISA mic preamp, giving your vocal or acoustic recordings a brighter and more open sound. There’s a pad on every mic preamp to accommodate higher-level signals without clipping.

Scarlett 18i8 offers two extra line outputs over the previous generation, and speaker switching technology for dual-monitor setups. Two independent headphone outputs allow for both engineer and artist to monitor during recording sessions, and a pair of virtual loopback inputs allows you to capture a stereo feed of any combination of hardware input and software playback channels—making podcasting, livestreaming and sampling tasks easier.

Scarlett 18i8 is designed to stand up to days on the road, and connects straight to your Mac or PC via USB cable. It comes with all the software tools you need to get started: two comprehensive digital audio workstations, and Pro Tools Artist and the Hitmaker Expansion.

If that wasn't enough, Focusrite have partnered with Splice to give 3rd Gen. interface owners a free 3-month Splice Sounds subscription when setting a new Splice account. Splice Sounds offers millions of high-quality, royalty-free one-shots, loops and presets, with new releases daily from your favorite producers, sound designers and artists. Creators use Splice to make all kinds of music, including chart-topping pop, Grammy-winning albums, underground mixtapes and cinematic scores.

And as with all Focusrite products, you’ll also benefit from a three-year warranty and award-winning customer support.

Landr Studio, Plus Five Free Masters
Produce and release your best work with two months' access to Landr Studio, as well as five free masters you can use even when your two months subscription is over.

Hitmaker Expansion
Antares Auto-Tune Access
For everything from natural sounding, near-real-time pitch adjustment for getting the best vocal takes, to lightning-fast hip-hop-inspired pitching for adding a whole new sound to your tracks.

Relab’s LX480 Essentials
Get four reverbs, modeled on The Hit Factory NYC’s reverb unit, and used on countless hits. LX480 Essentials gives you the sounds of a studio which has played host to names from Springsteen, the Stones and Kool and the Gang to The Weeknd, Pharell, Katy Perry, and everyone in between.

Softube Marshall Silver Jubilee 2555
The modern evolution of the iconic JCM800, brought to you by analog-modeling experts Softube. The Silver Jubilee offers everything from warm cleans, through classic crunch, and up to modern high-gain tube amp sounds.

XLN Audio Addictive Keys
Add beautifully captured piano to your tracks with the choice of one of four professional-sounding models from Steinway, Yamaha and the classic Rhodes. Plug in your MIDI controller and play; instantly be transported to a professional recording studio set up to capture one of these beautiful pianos—right from your studio.

XLN Audio Addictive Drums 2: Studio Rock
Add the sounds of a pro drummer to your songs easily. Featuring expertly captured samples from a high-end TAMA and Pearl drums and Paiste and SABIAN cymbals, recorded at Decibel Studios in Stockholm.

Brainworx Bx_console Focusrite SC
The preamps that made Focusrite what they are today to your music. No other plug-in offers the unique character of the iconic large-format console, with ISA 110 preamps—the origin of the famous "Air" you still hear on Focusrite interfaces today. Bx_console Focusrite SC is a full channel strip, offering EQ, de-esser, compressor, limiter, gate and expander.

Focusrite Red 2 & 3 Plug-in Suite
Features a pair of meticulously captured digital models of the truly iconic EQ and Compressors which have made the Focusrite name a staple in world-class facilities across the globe. If you’ve kept up with major music releases over the last 30 years, you’ve heard Red 2 and 3.
Features
Scarlett 3rd Gen included software:Focusrite’s Hitmaker Expansion includes:
Specifications
Warranty
All Focusrite products are built to the highest standards, and are designed to provide many years of reliable performance. In the event of a Manufacturing Defect becoming evident during the warranty period, Focusrite will ensure that the product is repaired or replaced free of charge. The warranty for any product purchased on or after the 1st January 2018 is a period of 36 months from the date of original purchase. The warranty period for products purchased on or prior to the 31st December 2017 is 24 months from the date of original purchase.

Everything You Need to Upgrade Your Livestream