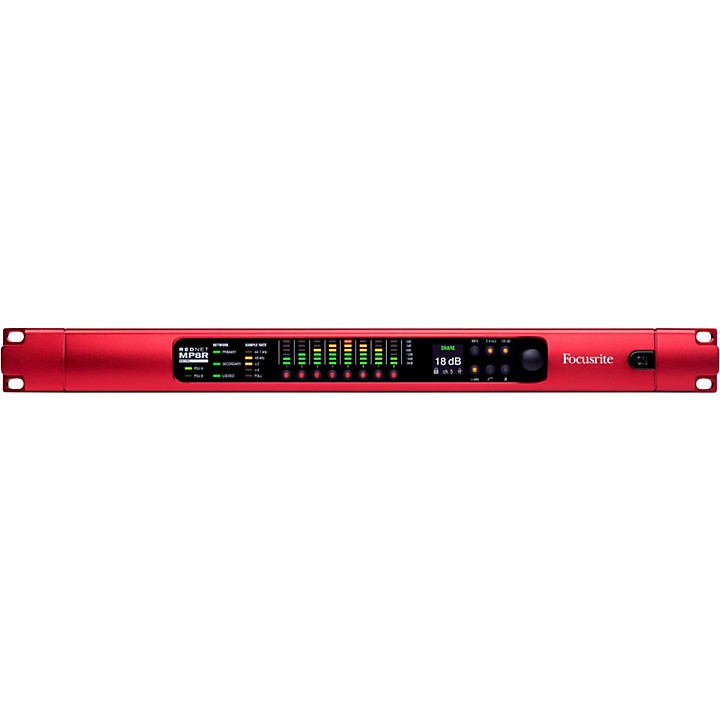 RedNet MP8R is an 8-channel remote-controlled microphone preamplifier and A/D for the Dante audio-over-IP network. Developed from the RedNet 4 studio remote-controlled microphone preamp, and incorporating input from leading live sound practitioners during its development, the MP8R provides a wealth of features that make it particularly applicable to the live sound/recording and broadcast environments, where reliability is paramount. Dual Ethernet ports are provided, with several operating modes including daisy-chaining and redundancy confirmed by front-panel indicators. Two separate power supplies with fault detection capability are included, with separate power input sockets on the rear panel. Power failure is indicated both remotely and on the front panel. The MP8R features a rugged, roadworthy exterior and maximum internal build quality. In addition, the MP8R offers a compact 1U rack-mount form factor.

The MP8R preamps represent the latest iteration of Focusrite’s award-winning mic pre designs, with a pedigree that stretches back to the original Focusrite products of the mid-1980s. Fully keeping pace with the latest developments in audio technology, today’s Focusrite preamps offer lower noise and great dynamic range than ever before. The preamps in the MP8R offer an increased maximum input level of 28dBu, plus a 20dB pad, high-pass filter, polarity inversion and phantom power. Each preamp has a dual input impedance of 10kΩ or 2.4kΩ, allowing flexibility when running multiple mic pres in parallel.

A particular feature of the MP8R targeted at the live sound field is its gain tracking ability. The unit appears as a 16-channel device on the network, the first eight channels being direct preamp feeds, while the remaining eight are automatically DSP level-compensated outputs sourced from the first eight. This architecture allows “splits” – such as monitor/FOH – to be set up in the digital domain, permitting one engineer to control the analogue mic gain while a second receives an output level that is constant irrespective of the analogue mic gain setting.

The preamps may be controlled in a variety of ways, including via the RedNet Control software package, Pro Tools and MIDI, and OCA (Open Control Architecture); in addition, the preamps can be operated from the MP8R front panel, where 6-segment level metering, numeric gain display and other indicators provide comprehensive monitoring of the unit’s operation. Following the mic pres are eight channels of Focusrite’s legendary high-precision A/D converters, operating at up to 192kHz/24-bit with minimum latency and offering class-leading dynamic range and overall performance.

Like the totality of the RedNet range, the MP8R interoperates seamlessly and fully with any other Dante audio-over-IP network components and infrastructure. Patching and interconnection can be managed with the Dante control software, while RedNet Control offers comprehensive remote mic pre operation.

This awesome plug-in recreates the analog signal paths of Focusrite’s revered ISA 110 and ISA 130 modules, which were a part of the Focusrite Studio Console. Designed and coded by the DSP geniuses at acclaimed software house Brainworx, the bx_console Focusrite VST/AU/AAX plug-in for Mac and PC faithfully captures the sound, feel and styling of the original iconic hardware.

If you purchased any Red, RedNet or ISA solution from January 2020 on, you will have the plug-in available in your Focusrite account as long as you’ve registered your product.

Features
WHAT’S IN THE BOXDimensions
Warranty
All Focusrite products are built to the highest standards, and are designed to provide many years of reliable performance. In the event of a Manufacturing Defect becoming evident during the warranty period, Focusrite will ensure that the product is repaired or replaced free of charge. The warranty for any product purchased on or after the 1st January 2018 is a period of 36 months from the date of original purchase. The warranty period for products purchased on or prior to the 31st December 2017 is 24 months from the date of original purchase.