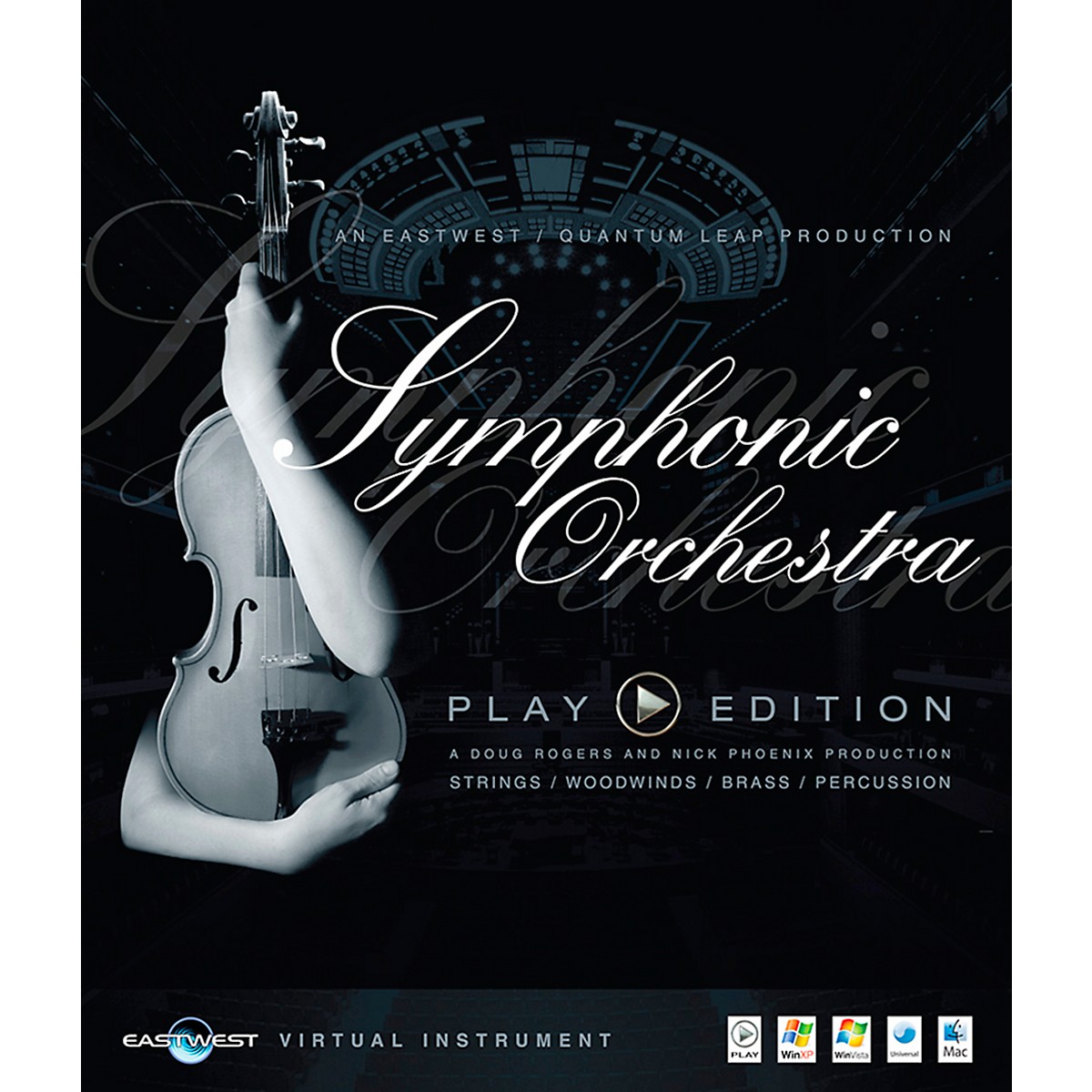 Have Questions? 866-498-7882
Call our experts for product info and phone-only specials. Or click here to chat now.

A big, bountiful, powerful, expressive, sonically superior collection of top-quality orchestral sounds, recorded in a first-class concert hall, played, recorded and programmed by expert practitioners, waiting to burst into life in your compositions.

Sound on Sound
Recorded by 11-time Grammy nominated classical recording engineer Prof. Keith O. Johnson, the EASTWEST/QUANTUM LEAP SYMPHONIC ORCHESTRA is the most awarded orchestral collection ever, including winning Sound On Sound's Reader's Choice Award an unprecedented 3-times, and the first orchestral collection to be recorded in a "state of the art" concert hall where orchestras mainly perform.

To achieve the feel of a live concert hall performance, each instrument and section was recorded with three mic positions, close, stage (conductor‘s position) and hall. By selecting different mic positions, users can mix these sounds together to create any kind of natural ambience their project requires. This eliminates the need for artificial reverb.

The EASTWEST/QUANTUM LEAP SYMPHONIC ORCHESTRA eclipses all others with the highest level of fidelity and realism. Get that big "Hollywood Sound" film/tv/games directors and producers seek "out of the box", no other orchestral collection comes close or is as easy to use!

The Way an Orchestra Should Sound
EASTWEST/QUANTUM LEAP Symphonic Orchestra has already come out on top in a recent roundup of orchestral collections for its level of warmth and detail. Now with the incorporation of PLAY, users of the upgraded EASTWEST/QUANTUM LEAP Symphonic Orchestra will experience the benefits of the new sample engine immediately. With the typical orchestral composition encompassing a large amount of instruments, EASTWEST‘s PLAY software will streamline the process by allowing many more instruments to be loaded at one time than with previous systems.

Beyond the orchestra's phenomenal recording quality is its ability to breathe life into the virtual world, creating a real space and filling it with sound. In the past, this meant adding reverb and effects, further digitizing and degrading the overall quality of your music. EASTWEST/QUANTUM LEAP accomplish this through separately recording the natural hall ambience after the instrument has stopped playing until the sound has actually ceased. The software triggers this "release trail" at the end of every note and adjusts the dynamics so that the samples blend seamlessly, truly placing the listener in the hall with the orchestra.

Each instrument and orchestral section is chromatically sampled at three different mic positions (close, stage and hall) allowing you to mix together instantly within the included PLAY sampler (PLATINUM and PLATINUM PLUS versions only) any combination for the ultimate in real-time tone and ambience control.

Multiple Mic Positions
All instruments were sampled with three different mic positions, allowing you to mix together any combination of mics using the interface for the ultimate in real-time tone and ambiance control. This feature enables you to customize the sound of the orchestra to your own requirements.

Mic Mixer
Control all mic positions for the orchestra, choirs, pianos, and other instruments with multiple mic positions with the built-in mic mixer
Now taken a step further, do it right in the patch
Load, unload, adjust, pan, mute mic positions as you wish
Load MORE thanks to 64-bit support
64-bit support allows you to load many more instruments and voices, limited only by your system RAM

As Beautiful As It Sounds
Interface designed to eliminate clutter, including only the controls needed for each individual virtual instrument

Articulations
Forget browsing through complicated patch names: pick the instrument and play Turn on/off articulations as you wish
Articulations list also serves as reference for all expressions within the instrument (no need to look up key-switches in charts)
Save your favorite configuration for quick retrieval

Effects Engine
The best sounding and most powerful effects engine out there, built from the ground up for the highest possible quality
Reverb section includes multiple impulse responses from halls, and the famous EastWest Studios and live chambers (more RIAA certified Platinum and Gold records awarded than any other studio)
The smoothest filters you'll ever hear

Security system
Authorize purchased instruments easily using the industry standard iLok security system
Offers complete portability, take your plugin anywhere you want, use it on any computer
Easy to authorize and manage (up to 500 authorizations on one key)

Platforms and Hosts
AU, VST, Standalone, Intel Mac, Windows XP, Vista, 7 and 8, 64-bit, 32-bit (use PLAY 4 for 32-bit compatibility)
Natively supported in all major hosts on all major operating systems - PLAY no matter what your platform
More native support than any other plug-in
Standalone: PLAY as many instruments as your computer can handle in one application