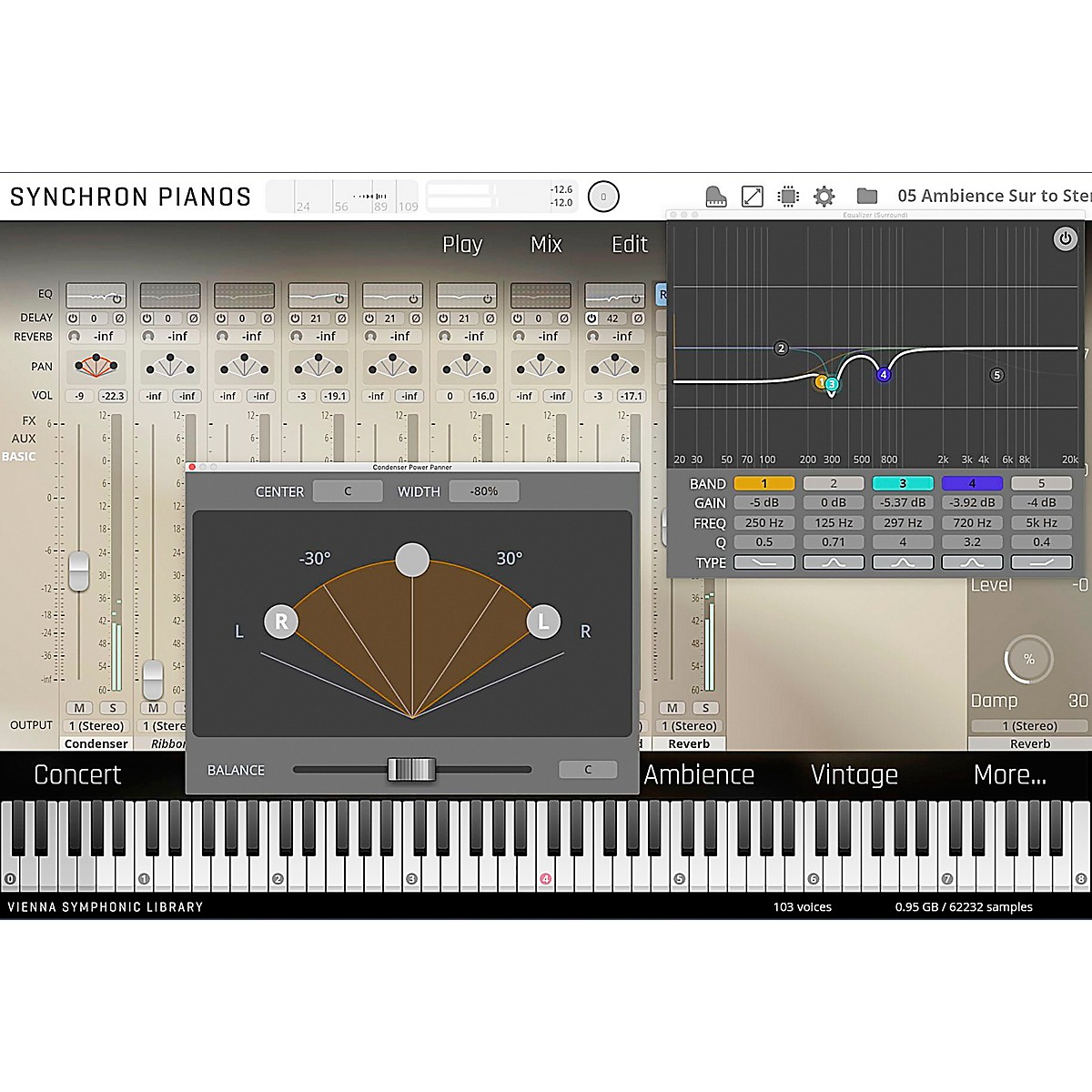 Synchron Blüthner 1895, The Lyrical Grand Full LibraryThis exceptional grand piano was built in 1895 by the famous Julius Blüthner Pianofortefabrik of Leipzig. It was acquired by Synchron Stage Vienna after having been lovingly restored by master piano builder Bernhard Balasfrom Vienna.The 6-foot-4 professional scale instrument is equipped with Blü...  Click To Read More About This Product

This exceptional grand piano was built in 1895 by the famous Julius Blüthner Pianofortefabrik of Leipzig. It was acquired by Synchron Stage Vienna after having been lovingly restored by master piano builder Bernhard Balasfrom Vienna.

The 6-foot-4 professional scale instrument is equipped with Blüthner’s specially developed and patented Aliquot system that uses additional dampened strings positioned above the conventional strings of the treble register, which are not struck by the hammers but resonate sympathetically. This fourth set of strings enhances the overtones, providing a velvety, organic shimmer and giving the instrument a particularly lyrical “singing” quality. In addition, the strings are unusually long and thin, stretched to an enormous string tension of 20 tons, which helps define the instrument’s specific sound. In combination with its soft hammers the Blüthner grand produces a clear, yet warm and soft timbre that is superior to many modern instruments in its variety of tonal colors.

Composers such as Debussy, Brahms, Mahler, Bartók, Liszt, Tchaikowsky, Shostakowitchand Rachmaninov created their works on a Blüthner grand. Famously, Paul McCartney played a Blüthner concert grand when recording “Let It Be” for the film of the same title in 1969.

Vienna Symphonic Library’s Blüthner 1895 grand piano was recorded at Stage B of Synchron Stage Vienna. This beautiful739 sq ft. (69 m²) live room with a 11.5-14.75 ft (3.5 to 4.5 m) height features a controlled acoustic environment with less ambience than the large main hall (Stage A).

While beautifully restored, this Blüthner 1895 was recorded “as is”, with all the charm and peculiarities that give a seasoned instrument its character. Its virtual recreation is extremely versatile and well suited for soloists looking for a slightly different, personal piano sound. The Blüthner lends itself extremely well to song accompaniments and chamber music settings, as well as to pop songs and ballads where other concert grands sound too large and obtrusive. Presets like “Intimate” or “Vintage” bring out this special quality even more.

Sampling Precision to capture the Blüthner 1895 with all its subtleties, Vienna’s engineers developed a highly precise motion-control system based on a solenoid that controls a noise-free “robot finger”. The micro-controller moves the finger with super-human precision, providing flexible curvatures for down-strokes and release movements, the latter corresponding with the preceding note length and various release speeds.

Even if you're not using a surround setup, you get more ambience variations and spatial depth out of the Full Library by adding the room microphones' signals to your stereo mix.

Customize Your Personal Sound In addition to the multitude of options from mixing various microphone signals, the Blüthner 1895comes with the free Vienna Synchron Pianos player that offers multiple options for shaping your sound and playing experience. Hosting a high-performance playback engine, the software provides a full-blown mixer with a broad range of effects such as EQ, compressor, saturator, algorithmic reverb, delay, chorus, flanger, rotary, and many more. Change the volume of body resonances, sympathetic strings and pedal noises right in the main Play window. In the Edit window you may even adjust EQ, volume, tuning, dynamic range, etc. for each individual key!