Gear returned in mint condition. If you're looking for a virtually new instrument in possibly less-than-perfect packaging, this is a great value.
Gear returned in great condition, with only minor signs of use, such as slight scuffs or pick marks. It looks and plays like new and may be considered an equivalent to display units found in retail stores.
$1,349.99 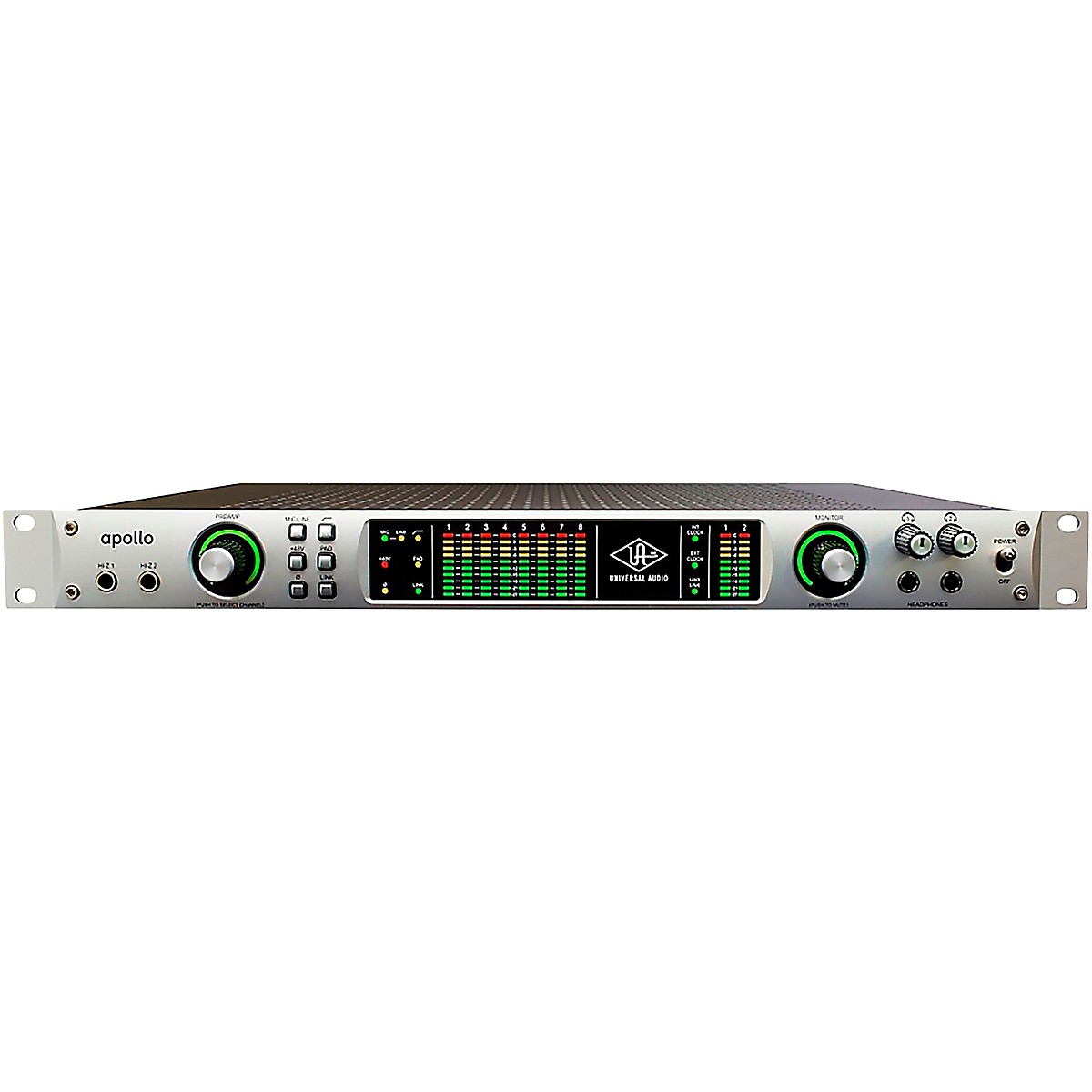 This specially priced demo unit, while 100% functional as far as we are aware, may have significant cosmetic wear. It comes with a 14-day return guarantee, but does not qualify for its original manufacturer warranty. Quantities are limited, so be sure get yours before it’s gone.Apollo is one of the world's most popular professional audio interfaces...  Click To Read More About This Product

This specially priced demo unit, while 100% functional as far as we are aware, may have significant cosmetic wear. It comes with a 14-day return guarantee, but does not qualify for its original manufacturer warranty. Quantities are limited, so be sure get yours before it’s gone.

Apollo is one of the world's most popular professional audio interfaces - delivering the sound, feel, and flow of analog recording to music creators everywhere. This 18 x 24 FireWire/ Thunderbolt-ready* interface combines class-leading sound quality with Realtime UAD Processing. So you can track audio through UAD analog emulation plug-ins - from Neve, Studer, Manley, Lexicon and more - in real time, with a sleek, elegant workflow on both Mac and Windows 7.

With smart features including four ultra-transparent mic preamps, eight line inputs/ouputs, dual headphone outs, and front panel instrument inputs, Apollo has all the right tools, all in the right place.

Class-Leading 24-bit/192 kHz Sound Quality
Designed to play a central role in a modern Mac- or Windows 7-based studio, Apollo incorporates an uncompromising approach to audio quality. Building upon decades of UA hardware heritage, it offers extremely high-resolution sound, with the lowest THD and highest dynamic range in its class. Apollo's four premium mic preamps, top-end converters - and UA's meticulous attention to circuit design - translate into greater accuracy and depth in your recordings, from tracking and overdubbing, to mixing and mastering. In fact, its sound quality is on par with dedicated converters costing thousands more.

Realtime DUO Core UAD Plug-In Processing for Tracking, Mixing, and Mastering
While Apollo's "natural" sound is exceedingly open and transparent, it can quickly deliver a wide range of classic analog tones and color via its Realtime UAD Processing. With DUO Core processing onboard, Apollo's onboard DSP Acceleration allows for recording through UAD Powered Plug-Ins - with as low as sub-2ms latency - so that producers can quickly monitor, audition, and "print" audio using classic analog emulations from Ampex, Lexicon, Manley, Neve, Roland, SSL, Studer, and more.** Better still, Apollo's Realtime UAD Processing is also available during mixing and mastering, so that music producers can use UAD plug-ins (VST, RTAS, AU) throughout the creative process.

Because Thunderbolt offers many times the bandwidth of FireWire, it allows music producers to connect numerous devices in series with the Apollo interface - including hard drives, processors, and additional computer monitors - all with fast, flawless performance. Thunderbolt also makes it easy to expand UAD plug-in processing power via a Thunderbolt-to-PCIe chassis and UAD-2 DSP Accelerator card(s).

Hardware Design and Workflow
One key feature of Apollo isn't really a "feature" at all. It's the numerous design details that give you a fast, natural workflow - and better results. There are physical front-panel controls for all the most commonly used features, including Preamp and Monitor level knobs, channel selection, mic pad and low cut, phantom power, and dual headphone outs with independent level control. Smart Hi-Z inputs on the front panel detect when you've connected your guitar or bass, and automatically enable hardware and software monitoring.

Sonically, Apollo's Mic inputs and Monitor outputs are digitally controlled analog, so you don't lose audio resolution when you adjust gain. High-resolution/high-contrast metering, derived from UA's legendary 2192 interface, is designed to be viewable at nearly any angle. Finally, standalone operation means that you can use Apollo's audio connections, and last-used DSP mixer settings, even without a computer connected.

** All trademarks are recognized as property of their respective owners. Individual UAD Powered Plug-Ins sold separately.

Specifications
Pro Coverage
Manufacturers Warranty
One year parts and labor warranty on all U.A. products and Kind of Loud products.