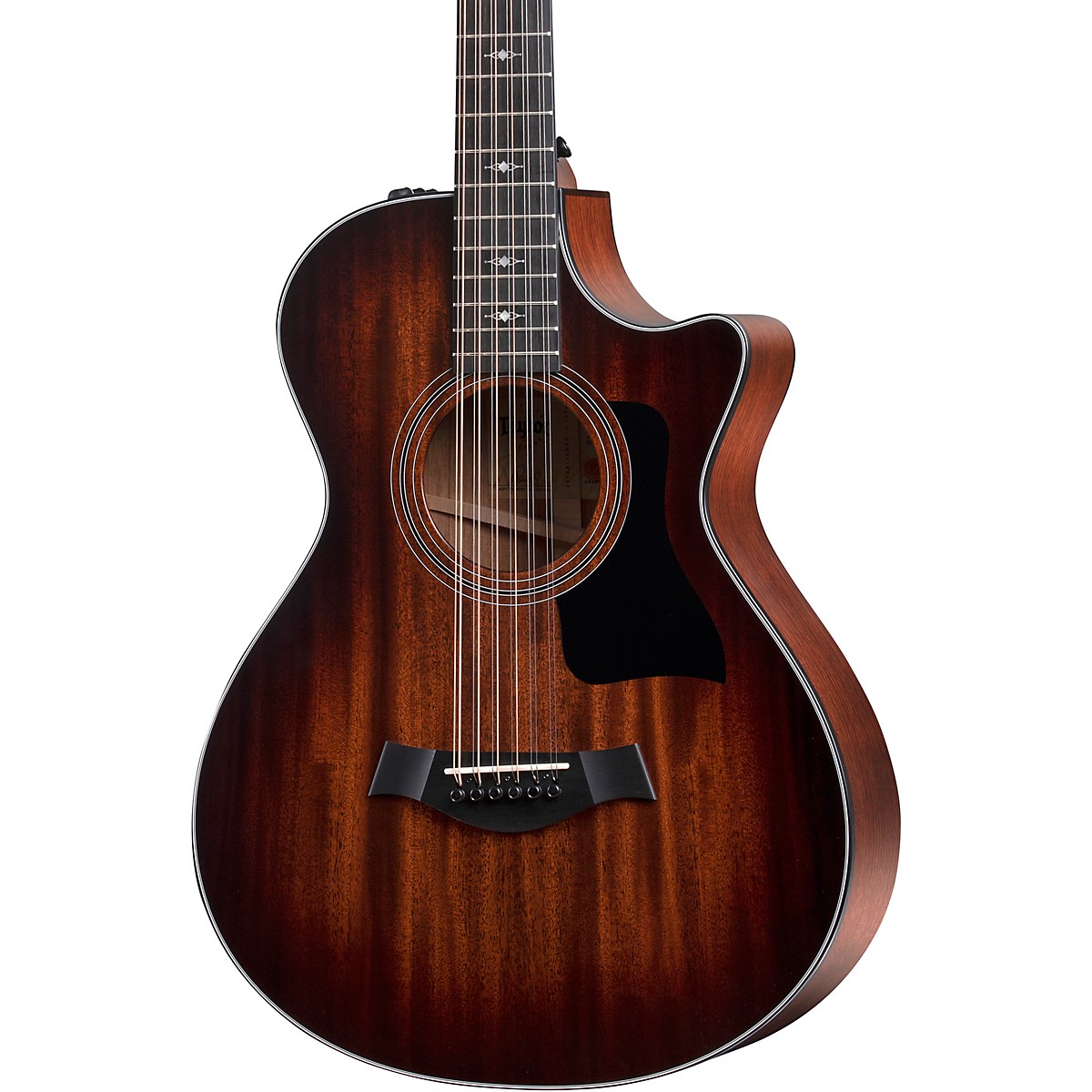 Building remarkable 12-strings is part of Taylor's heritage, and V-Class bracing now resolves some of the tuning idiosyncrasies unique to 12-string guitars. Strings will be heard as very in-tune, whether unison or octave, and are chimey, crystalline and shimmery. The new double-mounted string anchoring design features a shared anchor point for each...  Click To Read More About This Product

Building remarkable 12-strings is part of Taylor's heritage, and V-Class bracing now resolves some of the tuning idiosyncrasies unique to 12-string guitars. Strings will be heard as very in-tune, whether unison or octave, and are chimey, crystalline and shimmery. The new double-mounted string anchoring design features a shared anchor point for each string pairing. With a single row of bridge pins, the strings all have a consistent break angle over the saddle, which contributes more tonal consistency in the guitar's voicing. The bridge pins are the same as those used on six-string models.

Taylor 12-string guitars are famous for their ease-of-play, their neck stability, their intonation and their overall tone, making them the most popular 12-strings on the market. Taylor's slim neck profile and neck-to-body system allow precise and low action, resulting in the most comfortable "handfeel" possible in a 12-string guitar.Taylor's 300 Series has introduced countless players to the pleasures of the all-solid-wood acoustic experience; it's the entry point to Taylor's USA-made instrument line.

Players who step up to a 300 Series instrument will be rewarded with a guitar-for-a-lifetime that will only sound better with age. It doesn't take but a few strums to learn how the mix of tone woods, construction and appointments combine to make Taylor's famous playability, intonation and tone. The 300 Series has everything you need and nothing you don't need in a fantastic sounding and playing instrument.  All 300 Series instruments ship in a deluxe hard shell case made by Taylor for optimal fit and protection.

Tone Wood Pairing
A guitar's top is the primary filter and distributor of vibrating string energy through the guitar, which means it has a huge impact on its sound. Tropical mahogany is known for a meaty midrange featuring a strong fundamental without adding a lot of ringing overtones. It responds well to players with a strong attack who like dry, earthy, lo-fi sounds. It has a natural compression that smooths out strumming and picking technique. Mahogany's clear and direct tonal character makes it a great option for playing and standing out among other instruments. Tonally, blackwood behaves somewhere in the middle of rosewood and mahogany, with a little extra shimmer and chime that shows its family resemblance to koa. Pairing blackwood with the mahogany top not only gives you that roll-in effect associated with a mahogany top - really smooth attack and balance - but extra complexity as the note decays. It's a great combination.