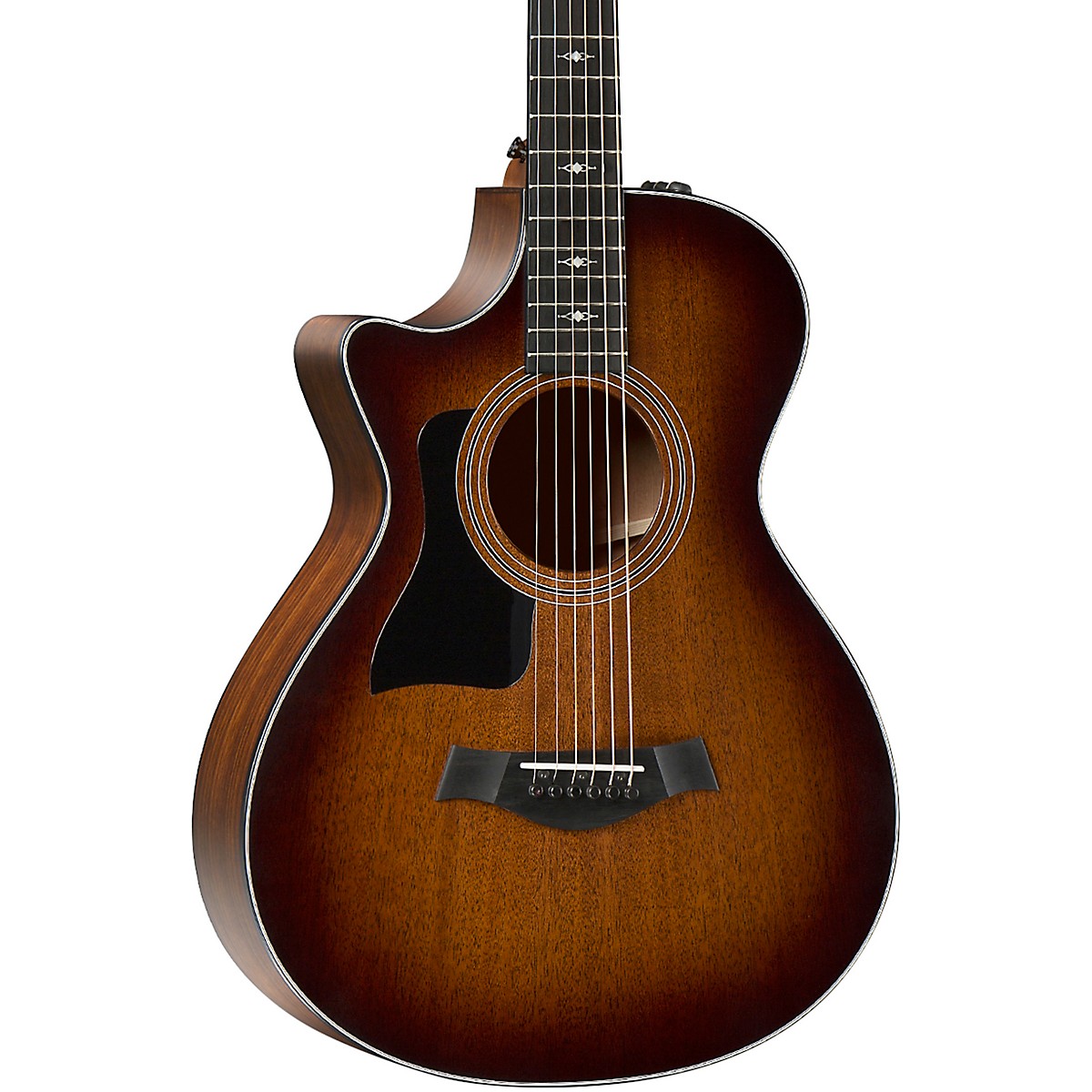 Taylor's 300 Series has introduced countless players to the pleasures of the all-solid-wood acoustic experience; it's the entry point to Taylor's USA-made instrument line. Players who step up to a 300 Series instrument, like this 322ce 12-Fret V-Class Grand Concert left-handed acoustic-electric guitar, will be rewarded with a guitar-for-a-lifetime ...  Click To Read More About This Product

Taylor's 300 Series has introduced countless players to the pleasures of the all-solid-wood acoustic experience; it's the entry point to Taylor's USA-made instrument line. Players who step up to a 300 Series instrument, like this 322ce 12-Fret V-Class Grand Concert left-handed acoustic-electric guitar, will be rewarded with a guitar-for-a-lifetime that will only sound better with age. It doesn't take but a few strums to learn how the mix of tonewoods, construction and appointments combine to make Taylor's famous playability, intonation and tone. The 300 Series has everything you need and nothing you don't need in a fantastic sounding and playing instrument. The 322ce 12-Fret V-Class Grand Concert left-handed acoustic-electric guitar ships in a deluxe hardshell case made by Taylor for optimal fit and protection.

Body Shape
Taylor's Grand Concert is slightly smaller than its Grand Auditorium and yields controlled overtones, so the sound won't occupy a lot of sonic space. This is often a key consideration when other instruments are in the mix, such as in a performance or recording environment, and it allows the guitar to be heard more clearly. The Grand Concert pairs well with both 14-fret and 12-fret neck-to-body construction, and offers an articulate voice with top-end chime. It's perfect for fingerstyle players and light strummers, though flat-pickers are known to enjoy its tonal character too. Its intimate size makes it lap/couch-friendly, and a great fit for players who find smaller instruments more physically comfortable.

Tonewod Pairing
A guitar's top is the primary filter and distributor of vibrating string energy through the guitar, which means it has a huge impact on its sound. Tropical mahogany is known for a meaty midrange featuring a strong fundamental without adding a lot of ringing overtones. It responds well to players with a strong attack who like dry, earthy, lo-fi sounds. It has a natural compression that smooths out strumming and picking technique. Mahogany's clear and direct tonal character makes it a great option for playing and standing out among other instruments. Tonally, blackwood behaves somewhere in the middle of rosewood and mahogany, with a little extra shimmer and chime that shows its family resemblance to koa. Pairing blackwood with the mahogany top not only gives you that roll-in effect associated with a mahogany top - really smooth attack and balance - but extra complexity as the note decays. It's a great combination.

V-Class Bracing
Taylor's V-Class bracing is a fundamental innovation in acoustic guitar design. It marks an important evolution beyond traditional X-bracing, introducing an entirely new platform for acoustic performance. It is essentially a "sonic engine" that optimizes the response of an acoustic guitar in three key ways: by boosting volume, sustain, and by largely resolving the intonation (in-tune-ness) issues that have long plagued acoustic guitars. V-Class bracing creates purer, more orderly notes that don't cancel each other out or sound "off". They have clearer, more consistent response, and the whole fretboard is brought into greater sonic alignment for a more musical playing/listening experience. Guitars with V-Class bracing are easier to tune; the pitch sounds purer and more solid, and electronic tuners can more easily locate notes for quick, precise tuning. Other benefits: harmonics ring more uniformly down the neck, notes are louder with more projection and sustain, and notes are more consistent, i.e., upper register notes don't get choked out or swallowed. Fewer "sour" sonic qualities exist with chords; a more agreeable relationship is created between notes as they ripen, bloom and decay.

Electronics
Taylor's ES2 is a revolutionary pickup design that delivers the latest in Taylor’s ongoing innovation in acoustic guitar amplification. The heart of the Expression System 2 is Taylor’s patented behind-the-saddle pickup, which features three uniquely positioned and individually calibrated pickup sensors. Because the pickup doesn't sit under the saddle, the bottom of the saddle comes in full contact with the bridge, allowing all the nuance of the guitar's tone to come through clearly whether playing acousticly or plugged-in. The location of the sensors enables a more dynamic range of acoustic sound to be captured than ever before while playing plugged-in. Together with Taylor’s custom-designed “professional audio”-grade preamp, this system produces exceptional amplified tone and responsiveness. On stage through a PA, plugged into your favorite acoustic amplifier, or direct into recording software, the Expression System 2 faithfully conveys the voice of your Taylor guitar. The Taylor Expression System 2 operates through a proprietary 9-volt battery compartment and easy-to-use volume, and active bass and treble controls.

Other Features
Taylor's 12-fret designs are appealing to many players who enjoy the guitars' compact playing framework, blending the lap-friendly GC body with the slightly condensed fret spacing of the 24-7/8" scale length and the shorter 12-fret neck orientation. This combination creates a slinky "handfeel" and easier fretting. Factor in the surprising tonal power and midrange warmth and vibrancy for a smaller body, thanks to the bridge's position near the center of the lower bout. The design is physically efficient, so it has strong projection; despite its smaller size it sounds like a huge instrument. Taylor 12-fret guitars are not just great for fingerstyle and light playing; players who love strumming or digging in with a heavier attack also appreciate them for their tonal character. Pairing a 12-fret neck design with a cutaway body blends the unique response from the bridge sitting back a little farther on the lower bout with the accessibility to the upper register - you get to play the high notes. As to the slotted headstock, the angle of the strings as they bend over the nut is a little more acute, which puts a little more downward pressure on the nut. To your fretting hand, it'll feel a little more precise and better behaved as you fret near the nut; notes don't want to bend as easily closer to the nut.