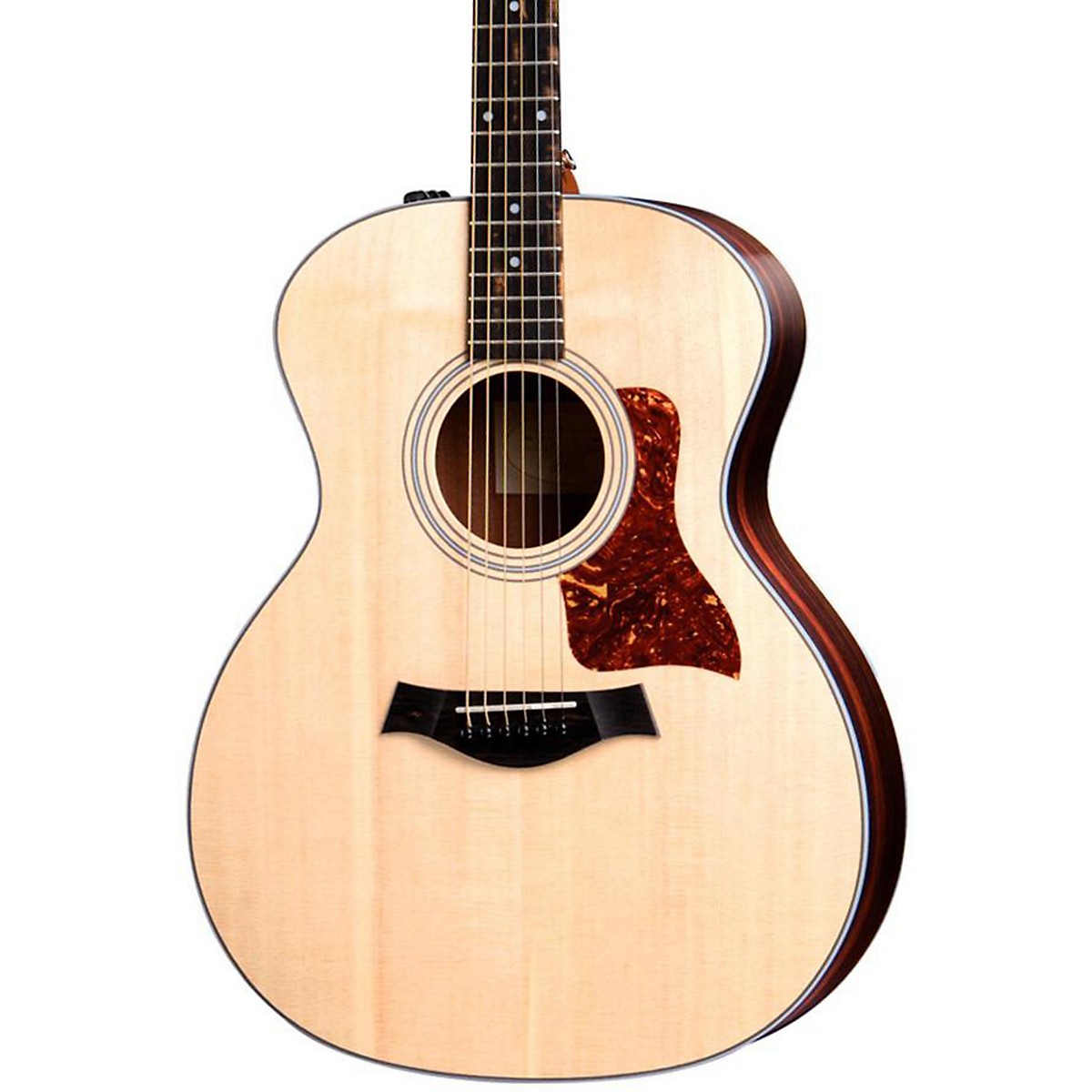 Taylor's 200 Series 2014 214e Grand Auditorium Acoustic-Electric Guitar features a desirable gloss finish that you'll take a shine to. The Grand Auditorium was the first guitar shape designed from scratch by Bob Taylor. It was unveiled to commemorate the company's 20th Anniversary in 1994, and since then it has more than lived up to its promise. Al...  Click To Read More About This Product

See All Taylor 6 String Acoustic Guitars
Out of Stock Online Please call or chat to check your local store inventory for this item.

Taylor's 200 Series 2014 214e Grand Auditorium Acoustic-Electric Guitar features a desirable gloss finish that you'll take a shine to. The Grand Auditorium was the first guitar shape designed from scratch by Bob Taylor. It was unveiled to commemorate the company's 20th Anniversary in 1994, and since then it has more than lived up to its promise. Although the Taylor GA has the width and depth of a dreadnought, its narrower waist gives it the appearance of a smaller guitar, adds treble "zing" across the guitar's tonal spectrum, sharpens the definition of individual notes, and also enables it to rest comfortably in the lap. Because Taylor removes mass from the width of the GA's braces, the acoustic-electric guitar top moves faster, resulting in a snappy, bell-like tone. The Taylor GA is designed to be a strong fingerpicking guitar that also can handle medium strumming, and is exceptionally versatile.

The Taylor 200 Series 2014 214e Grand Auditorium Acoustic-Electric Guitar features a solid Sitka spruce top, a top-quality wood, known for its balanced tone and clarity. The Indian rosewood back and sides, also premiere wood, produces rich, booming sound, with the perfect element of projection. The 25-1/2" scale, 1-11/16" nut width, and 15" radius adds comfort for intricate movements up and down the ebony fret board.

The NT neck joint fits into a specially cut pocket in the body of the Taylor. The frets are supported equally by the neck, creating a more stable playing surface, one that is continually straight, from the bottom to the top of the neck. The mahogany neck is strong and provides added presence and clarity in the tone, and the ebony bridge and fretboard bring out lasting sustain.

At the heart of the Taylor 214e acoustic-electric guitar lies an integrated electronics system, letting you dial in and amplify the guitar quickly and effortlessly. The electronics include bass, treble, and volume controls, for an individualized plugged-in experience. Taylor tuners keep the guitar in precise tuning and chrome hardware add an extra sleek look to this already stunning offering from Taylor. You won't believe the sound.

ES-T Under-Saddle Transducer
The ES-T is a single-source, under-saddle transducer with individual elements for each string. It features an onboard preamp and the same active controls found on the full ES. Featuring a custom-voiced EQ and dynamic response, the system is powered by a 9V battery, with a battery life LED power indicator (which is lit when the battery is being used). The pickup also has a Phase switch for feedback control, which is located on the preamp board inside the soundhole.