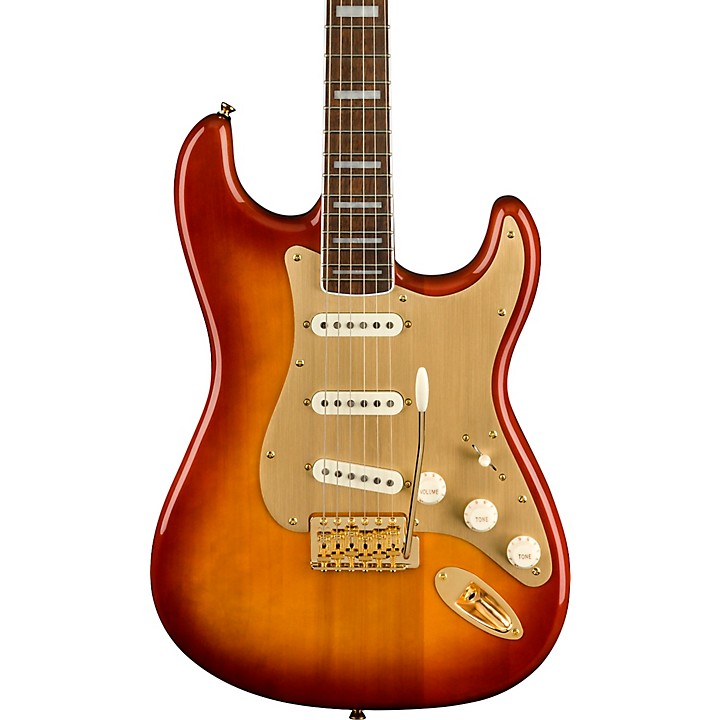 The Squier 40th Anniversary Gold Series Stratocaster delivers eye-catching looks with a selection of player-friendly, upscale features. For the celebration of this anniversary, the Squier/Fender design team created this very special instrument to bring advancing players iconic Strat performance and style, along with that spanky Strat tone.

A Body Built for Tone

The design choice of nato for the body wood might, at first glance, seem a little non-traditional compared to the usual choice of poplar, alder or ash for Strat bodies. But, from both a tonal and sustainability angle, it makes a lot of sense for the Squier 40th Anniversary Gold Series Stratocaster. While nato is often compared to mahogany (in fact, it's frequently referred to as "Eastern mahogany") for providing a warm tone, it is also crisper, giving a nato body a comparable snap and spank to the traditional woods used for a Strat. Nato is also widely available and more readily sustainable, making it a responsible choice as well. The body is topped with a gorgeous gloss finish, available in several striking colors.

The Squier 40th Anniversary Gold Series Strat features a hyper-comfortable, C-profile maple neck with a bone nut and a 9.5"-radius, bound, Indian laurel fingerboard in a classic 21-fret configuration. Pearloid block inlays add an extra touch of refinement and a bit of flash to this celebratory instrument.

The Gold Series Stratocaster boasts Fender-designed, Alnico 5 single-coil pickups to deliver that instantly identifiable Strat tone. From the bite of the bridge and the rich, round tone of the neck pickup to the iconic funky "quack" of the bridge/middle and neck/middle combinations, this 40th Anniversary edition is a stunning example of the sheer sonic range of the Stratocaster design.

What truly sets the Squier 40th Anniversary Gold Series apart is its luxurious look. With gold-plated hardware—from the vintage-style tuning machines to the six-screw, synchronized tremolo bridge—a gold anodized aluminum pickguard, bound fingerboard and an engraved 40th Anniversary neck plate, this is a very special instrument you will treasure for years to come.

Squier guitars have introduced innumerable guitarists to the world of Fender-designed guitars over the years, and the Squier 40th Anniversary Gold Series Stratocaster is a reminder of how important that influence has been. With striking finishes, upscale looks and classic Strat tones, this is a guitar that's an obvious choice for any player's collection.