Gear returned in mint condition. If you're looking for a virtually new instrument in possibly less-than-perfect packaging, this is a great value.
Gear returned in great condition, with only minor signs of use, such as slight scuffs or pick marks. It looks and plays like new and may be considered an equivalent to display units found in retail stores.
$279.00 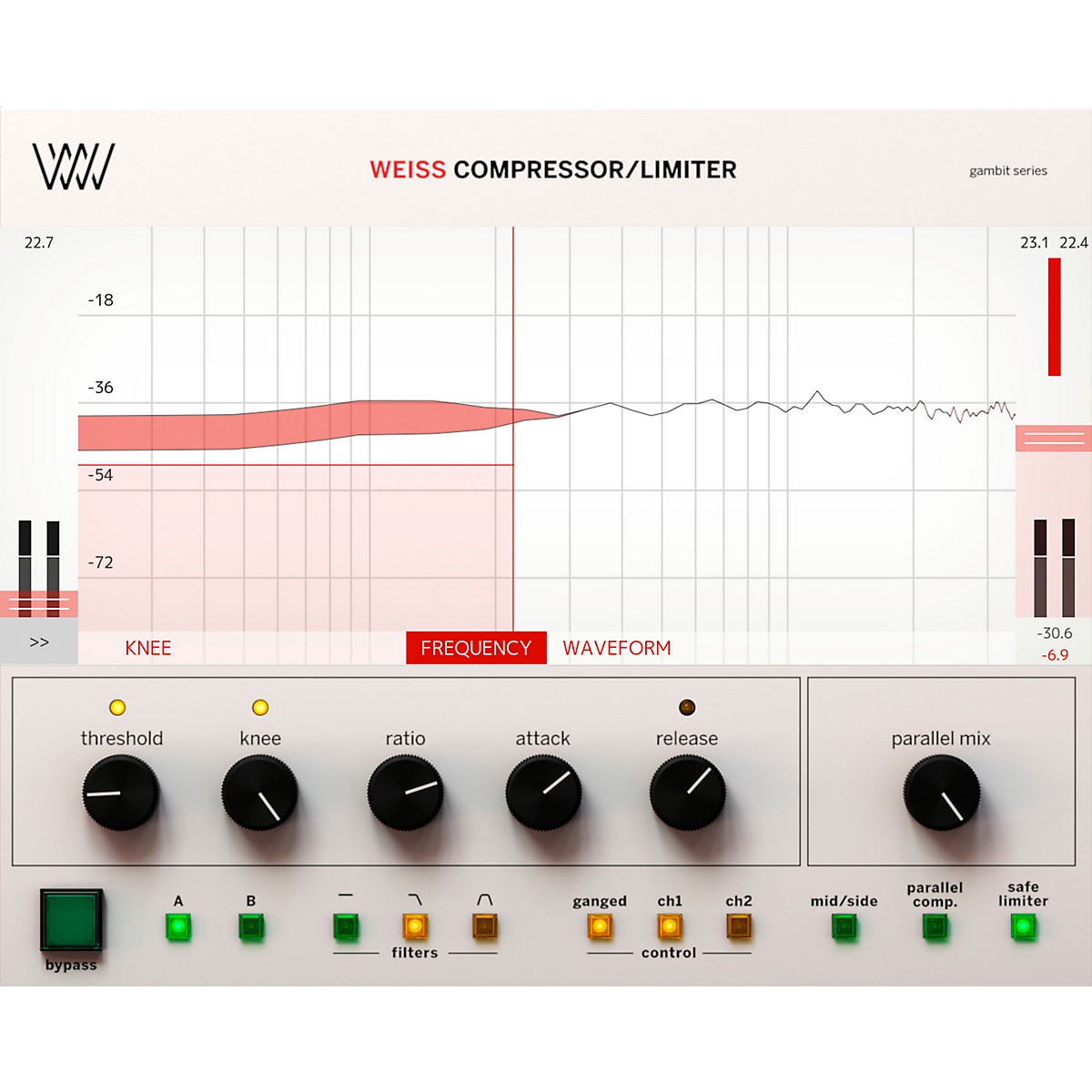 The name Weiss is synonymous with quality in mastering, and a truly exceptional compressor/limiter is essential to any serious mastering engineer. The Weiss DS1-MK3 is the gold-standard for the world’s greatest mastering gurus, and for the Weiss Compressor/Limiter, they draw on its essence (and code-base) to bring a totally focused modern answer to...  Click To Read More About This Product

The name Weiss is synonymous with quality in mastering, and a truly exceptional compressor/limiter is essential to any serious mastering engineer. The Weiss DS1-MK3 is the gold-standard for the world’s greatest mastering gurus, and for the Weiss Compressor/Limiter, they draw on its essence (and code-base) to bring a totally focused modern answer to the question ‘how should I deal with dynamics on my mix bus?’

Available as a standalone plug-in, or as part of the Weiss DS1-MK3 collection (also including the class-leading Weiss Deess de-esser, and the fast and intelligent Weiss MM-1 Mastering Maximizer) the Weiss Compressor/Limiter aims squarely at the body of your sound, and offers the perfect set of features for this most crucial of tasks.

Unbeatable sound
The Weiss Compressor/Limiter contains the same digital compression and limiting algorithms as the top-of-the-line Weiss DS1-MK3 plug-in, so you get the very same sound-quality.

Unbelievable visuals
The new hi-res visuals, including waveform view and FFT readouts, mean you can see your work, and the effect you're having, with greater clarity than ever before.

Untouchable workflow
They put all the most vital controls at your fingertips in an all-new interface, but allow access to the epic detail of the Weiss processing in an 'expert' side-menu. Work faster and with fewer distractions.

Weiss: The last word in mastering
Like other Weiss plug-ins, the Compressor/Limiter is based on the gold-standard of mastering dynamics processors, the Weiss DS1-MK3.

Loved and needed in equal measure by top mastering engineers around the globe, the DS1 was first introduced in hardware in the early 1990s, and has continued to command pride of place in the best mastering facilities there are. Due to its enormous desirability the hardware will set you back around $10,000. So to distill its awesome-sounding essence in this suite of plug-ins for a fraction of the cost felt like a very Softube mission indeed.

Make or break
The mastering stage is the last chance to make or break a track, so getting it right can be the difference between a battle won or lost. That’s why the startling transparency and effectiveness of the Weiss digital compression algorithms, and its unrivalled versatility in terms of detailed control over attack and release times, knee settings, ratio, threshold, filters (low pass and band pass), and other crucial factors, are a must-have.

The Weiss Compressor/Limiter, for all its unassuming charm and apparent simplicity, is a beast, both in terms of sheer sound quality, and flexibility.

Little louder? Still good.
And being able to push a track to the appropriate degree of loudness without unpleasant artifacts from the limiter is rightfully expected of any modern mastering engineer. That’s when the quality of your tools really matters; the Weiss is the only product that allows you to achieve such a clean, sweet, and dynamic sound at high levels. And with two brand-new advanced limiter algorithms on top of the Weiss original (including the Type 2 true peak limiter), you have more top-of-the-line options with Weiss than ever before.

Great on individual tracks too
Of course, this being a plug-in, you can run as many instances of it as you like, so there’s nothing to stop you using its uniquely clear and precise character on individual instrument tracks. Take a bass guitar, for example, through the Compressor/Limiter with a low-pass filter applied, to compress only the lowest frequencies and fatten out the body of the instrument. Or use the Compressor/Limiter on a vocal in conjunction with the Deess, for perfectly tailored dynamics processing across the frequency range, and no compromise.