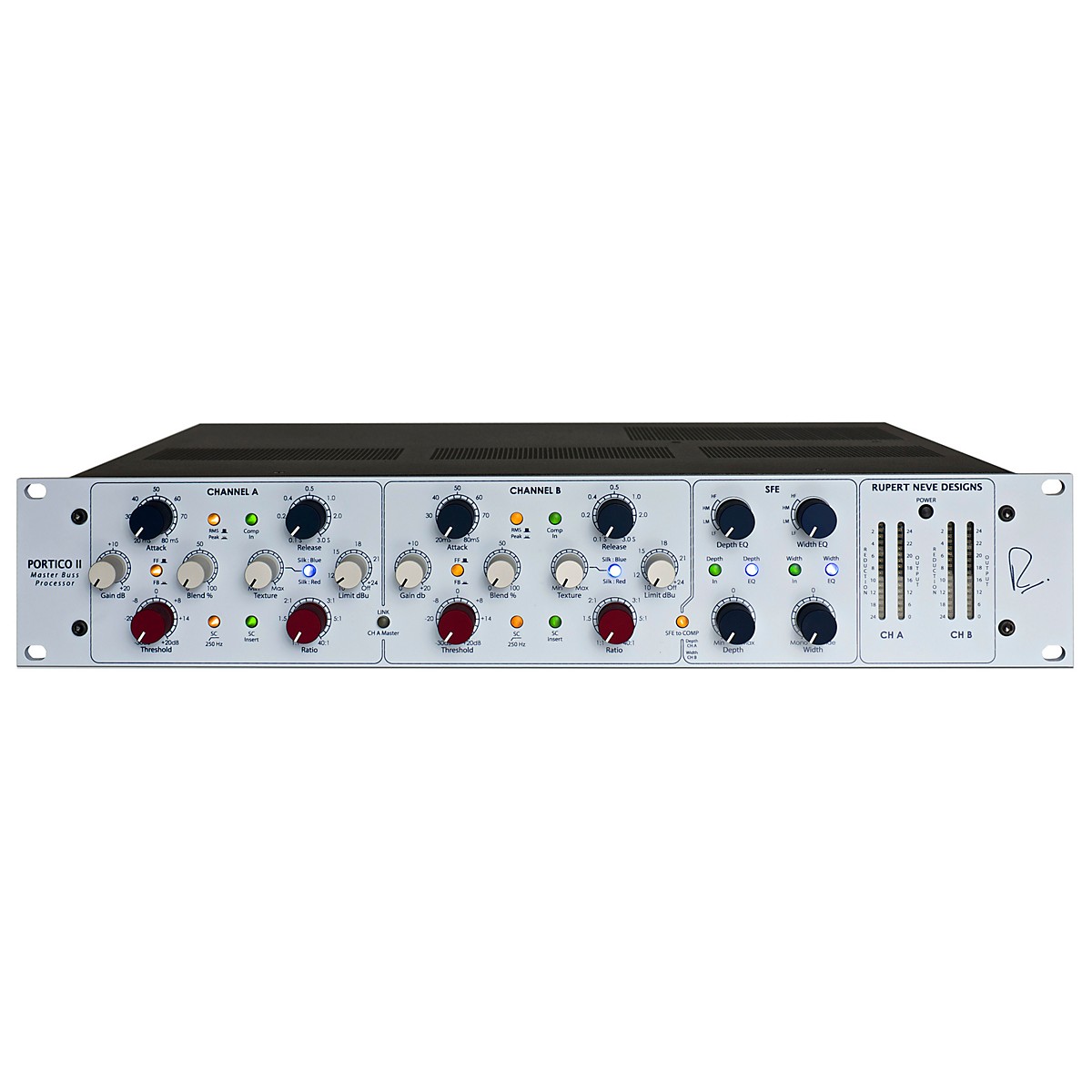 Based on the high voltage, discrete and class-A signal paths made famous in the 5088 Mixer and the Portico II Channel, the Portico II Master Buss Processor is a creative tool that redefines the boundaries and limitations of traditional 2-channel compression and limiting. Though originally developed for mastering applications, the MBP has quickly be...  Click To Read More About This Product

Based on the high voltage, discrete and class-A signal paths made famous in the 5088 Mixer and the Portico II Channel, the Portico II Master Buss Processor is a creative tool that redefines the boundaries and limitations of traditional 2-channel compression and limiting. Though originally developed for mastering applications, the MBP has quickly become a favorite of mix engineers, tracking engineers, and even FOH engineers. From mixing bass-heavy EDM to a delicate master of a chamber ensemble, it has something to offer everyone – no matter the use or genre.

With input and output transformers designed and implemented by Mr. Rupert Neve, the high-voltage 72V topology found in the Master Buss Processor will integrate flawlessly with virtually any system. Additionally, the MBP incorporates mastering-grade detented pots throughout to fine-tune its revolutionary dynamics, tone, and stereo field controls. This new topology is a significant evolution of Mr Rupert Neve’s classic designs with appreciable benefits to headroom, dynamic range, distortion, noise, slew rate, bandwidth, and accuracy while still providing the sweet, musical performance that has been a part of countless recordings.

The Compressor
The MBP’s two compressor sections allow virtually limitless possibilities in dynamics for either dual mono or stereo sources, with controls for ratio, threshold, attack, release, blend, side chain HPF, limit and make up gain. When engaged, the compressor section can be used in both feed-forward and feed-back modes to provide a transparent modern response (feed-forward), or a smoother, more musical vintage response (feed-back). Peak mode alters the compressor’s attack to react to peak transients with a roughly .1ms response time. When the Peak switch is disengaged, the compressor responds to the RMS signal in conjunction with the attack and release settings. SC HPF inserts a high pass filter at 125 Hz into the side chain to deal with intense low frequencies that may skew the response of the VCA with certain songs and instruments. “Blend” creates a parallel mix between the compressed and dry signals. By mixing the compressed and dry signals, it is possible to increase the volume of quieter elements in the source material (for instance, delicate snare brushing on a track with much louder hits), while maintaining a natural dynamic feel for the louder elements.

The Limiter
The Portico II Master Buss Processor also features an extremely versatile, transparent and musical limiter. At first glance, one might scoff at the single knob operation – however, this limiter is extremely intelligent, knowing how to appropriately respond to the various signals presented to it. Our new Adaptive Release Technology is behind this revolutionary performance. Using a blend of release time constants, this limiter will simultaneously respond quickly to transient material (such as the “snap” of a snare drum) and slowly to more sluggish signals (such as a bass guitar). This configuration allows the limiter to grab a transient and let go just an instant later, while also dealing with more constant signals in a slower, more musical way. In this manner, the MBP’s limiter can provide a much more aggressive amount of limiting than typically possible, while maintaining the essential character of the music and remaining free of the modulation distortion usually found in a fast-acting limiter.

The Stereo Field Editor
The stereo field editor on the MBP takes traditional M-S techniques to new heights with width, depth and corresponding bandpass filters. The width control enables the user to increase or decrease the width of a stereo image (wide/mono) and adjust the amount of ambience inherent in the recording. As the width control is rotated toward wide, the amount of difference material is boosted, often resulting in more ambient material, and accentuated stereo reverbs. Conversely, the stereo field is contracted when rotated to mono, and, if the left and right channels are highly coherent (i.e. both channels include closely similar material that is in phase), this mono content is enhanced. If the phase of one of the input channels is then reversed the mono content may be virtually eliminated. Because the amount of effect the width control has is entirely dependent on the amount of stereo information in the original source material and the interplay between the stereo field editor′s other controls, listening and experimentation are essential for the best results.