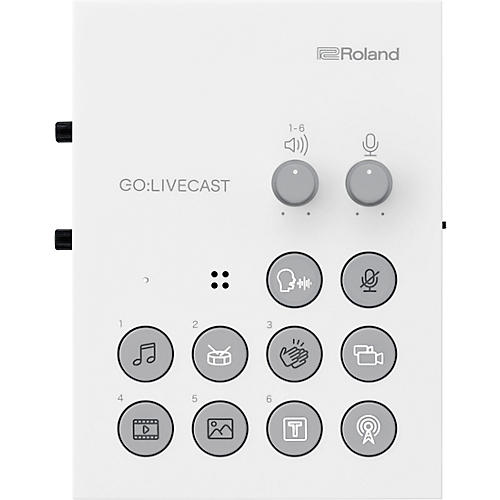 The Roland GO:LIVECAST is a simple and affordable way to make your livestreaming and broadcasts look professional. This hardware/app combo is a fully featured streaming studio. It lets you mix sound, display titles, play media, trigger sound effects and more—without needing a computer or expensive dedicated A/V gear. With just the GO:LIVECAST hardw...  Click To Read More About This Product

The Roland GO:LIVECAST is a simple and affordable way to make your livestreaming and broadcasts look professional. This hardware/app combo is a fully featured streaming studio. It lets you mix sound, display titles, play media, trigger sound effects and more—without needing a computer or expensive dedicated A/V gear. With just the GO:LIVECAST hardware, companion app and your mobile device, you have all the tools you need to present engaging live content.

Using GO:LIVECAST is quick and easy—just plug in your smartphone and connect earbuds or headphones to monitor sound. A built-in mic is ready to capture high-quality audio, complete with onboard reverb. Or, plug in a professional mic via the XLR input—there’s even a stereo line input for adding a guitar preamp, synth, mixer or other sound source.

The GO:LIVECAST app includes easy-to-use media tools. These tools bring premium production value to your web shows. Create your own personalized libraries for music, sound effects, photos and videos. Or, start creating with a variety of pre-installed options. Custom titles and text are also available, enhancing your productions even further. Media elements for different shows can be stored in Live Sets, all queued up and ready for when it’s time to go live.

The Roland GO:LIVECAST app logs-in to your accounts on Facebook Live, Twitch, YouTube, and other major streaming services. Just select a platform and tap to start webcasting. As you live stream, comments from your viewers can be monitored via a scrolling window in the app.


A Mini Broadcast Studio at Your Fingertips

The GO:LIVECAST hardware features a simple, customizable control layout, which lets you direct your live presentations and stay fully engaged with your audience. All it takes is a touch to start broadcasting, play music, display titles, launch photos and videos. You can even trigger applause samples at the end of the show. Knobs provide quick control of mic and media volumes, while the mic-mute button will keep coughs and unwanted sounds out of your livestream.


Get the Best Out of Your Smartphone Camera

Within the GO:LIVECAST app, you can add a skin filter to soften the look of your device’s front or rear camera. Portrait or landscape mode is automatically set by your device’s positioning. In-camera mirroring displays the proper left/right perspective to your audience. It’s even possible to connect a second device camera over wi-fi, with one-touch switching and support for split-screen views.


A Serious Range of Compatibility