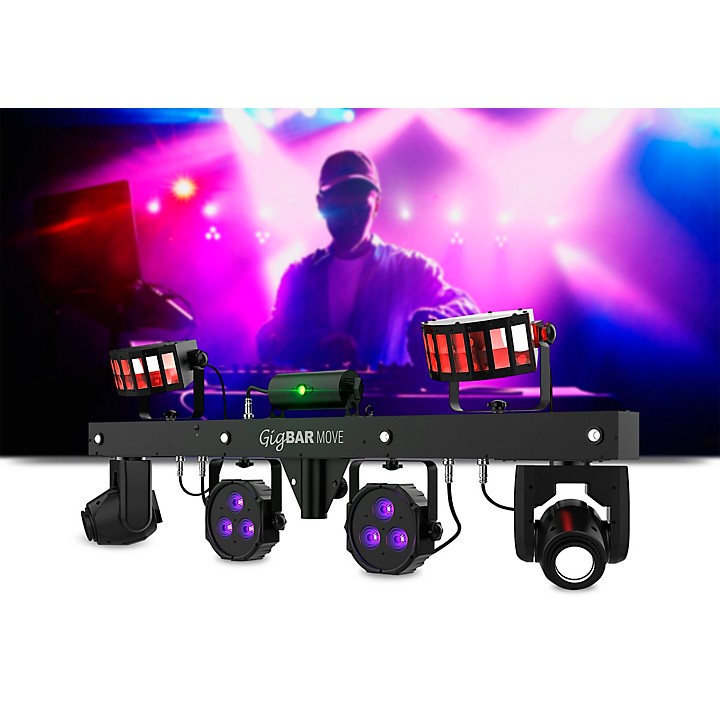 CHAUVET DJ expands their lineup of DJ lighting rigs with the GigBAR Move, now available at Guitar Center. The GigBAR Move is designed to be an all-in-one lighting solution. It expands on the features of the GigBAR 2 by adding moving heads, and is great for DJs and mobile performers looking for simplicity in their lighting setup.

Five different lighting features are included on the GigBAR Move. They include moving heads, derbies, LED washes, a center laser and strobe effects. Each of these lighting effects can be individualized for a custom show. The built-in UV LEDs illuminate florescent objects so the room really lights up. Designed to deliver a full show, the GigBAR Move elevates any set.

Building on the GigBAR 2, the GigBAR Move features moving, rotating heads. These heads have 360-degree rotation with a 720-degree flip. Separate color and gobo wheels add creative programming abilities to the heads. CHAUVET DJ also added built-in Totem Mode to the heads so that they stay focused on the crowd.

During a performance, the GigBAR Move has several operating options. Players can choose to use the stand-alone mode that’s either automated or sound-activated. The GigBAR Move can also be operated with the included wireless IRC-6 remote control. To keep things hands-free, the wireless footswitch offers control during a live set. Optional DMX adds another layer of individualized control for the GigBAR Move.

Every lighting effect on the GigBAR Move is pre-mounted to a single bar. Simply attach the bar to the included tripod, connect the wireless footswitch, and plug it in for an instant light show. The GigBAR Move can also connect with other GigBAR Moves, or the GigBAR 2 in master/slave mode, so additional lighting is simple to add. Transport it all in the included gig bag.
Features