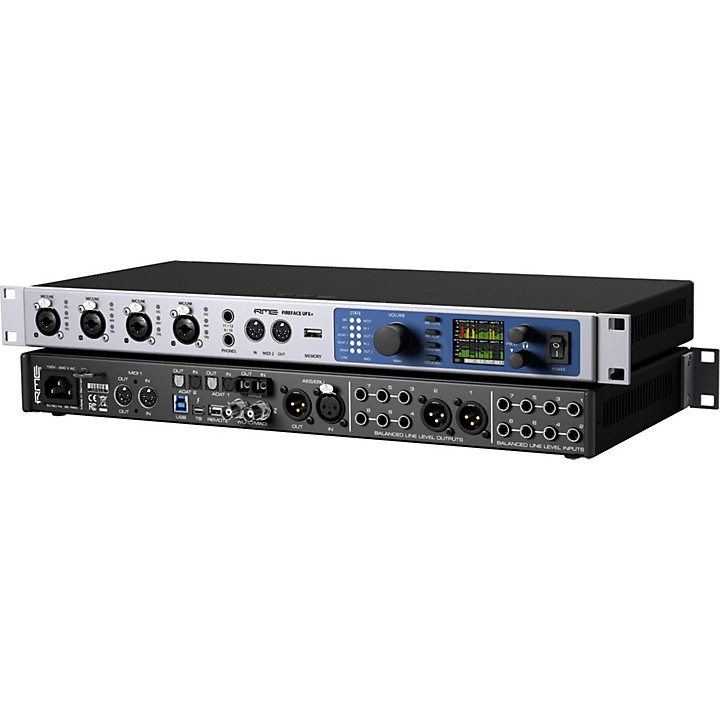 Notify me when this item is in stock.
Protect your gearLearn more
Cover drops, spills or cracks with Pro Coverage
Hey there. How can we help you out?We're here for your gear needs.
866-498-7882
See All RME Audio Interfaces

The Fireface UFX+ USB 3.0 & Thunderbolt audio interface becomes the center of any multitrack studio because it is able to handle up to 94 channels I/O with ease. With unprecedented flexibility, compatibility, the inclusion of DURec (Direct USB Recording) and RME’s famous low-latency hardware and driver designs, the Fireface UFX+ raises the bar to new heights. Packed with features not found on its older sibling, including MADI I/O (188 channels of I/O, 128 channels more than the Fireface UFX), a more powerful DSP, USB 3.0, Thunderbolt technology, and a new optional remote control firmly places the RME Fireface UFX+ as the new reference in multitrack recording, mixing and monitoring.

You Name It, You Connect It
Its flexibility in connectivity and expansion is unrivalled—Analog, ADAT, MADI, AES, SPDIF. USB 2, USB 3 and Thunderbolt technology are standard on the Fireface UFX+. The UFX+ has an impressive channel count: 12 analog + 16 ADAT + 2 AES + 64 MADI = 94 channels input plus output = 188 channels in total. Thunderbolt technology gives the Fireface UFX+ real PCI Express audio performance under Mac and Windows, with lowest latency, lowest system overhead and lowest CPU load. The Fireface UFX+ is fully Thunderbolt technology compatible under Windows, including hot-plugging. All new AD/DA converters, optimized analog I/O circuits, as well as improved SNR and THD values guarantee pristine, crystal clear and transparent audio. A new PAD-free mic circuit design with +18 dBu maximum input level and 75dB gain range serves even the most critical recording situation and source trouble-free. New low-impedance Hi-Power phones outputs (2 Ohms) with +19 dBu maximum output level provide ample output power as well as volume on any phones, high or low impedance.
Comprehensive MADI Connectivity
The Fireface UFX+ opens the doors to a host of RME and 3rd-party digital and analog I/O solutions. Expanding your analog channel count, the ability to route/mix within the digital domain through numerous sources presents many flexible options. Multiple external MADI devices can also be connected in series. To further enhance MADI flexibility, the Fireface UFX+ boasts some typical RME-style features. For example in USB 2 mode, which is limited to 30 channels I/O (12 analog plus 16 ADAT plus AES), the MADI I/O is still available via RME’s integrated hardware mixer TotalMix FX. Word Clock I/O (BNC) can be switched to MADI I/O (coaxial), and a special split mode even supports the use of both MADI I/Os simultaneously, with 32 channel each on optical and coaxial.

ARC USB Remote Control
The ARC USB connects to your computer via USB, and talks to TotalMix FX directly. It has 15 freely assignable and illuminated buttons, one encoder wheel, and a TS jack to connect a foot switch. The ARC USB is a USB 1.1 MIDI remote control for the Fireface UFX+. Thanks to operating as a UAC 1 class device, it is natively compatible to Windows and Mac OS X. As soon as it is present in the operating system, TotaIMix FX will automatically detect the ARC USB, and communicate with it via simple MIDI remote commands to control the UFX+.

TotalMix FX
Since 2001, TotalMix has added unlimited routing and mixing to RME audio interfaces. Its unique capability to create as many independent submixes as output channels available, turned it into the most flexible and powerful mixer of its kind. With supported hardware, TotalMix FX includes a complete effects system, which not only adds flexibility to the recording chain, but also makes latency saddled software solutions obsolete. TotalMix FX can completely replace an external mixer, enabling the creation of multiple latency-free monitor mixes with EQ, Dynamics, Reverb and Delay for any outputs, including main monitors and headphone mixes for musicians.

Everything You Need to Upgrade Your Livestream