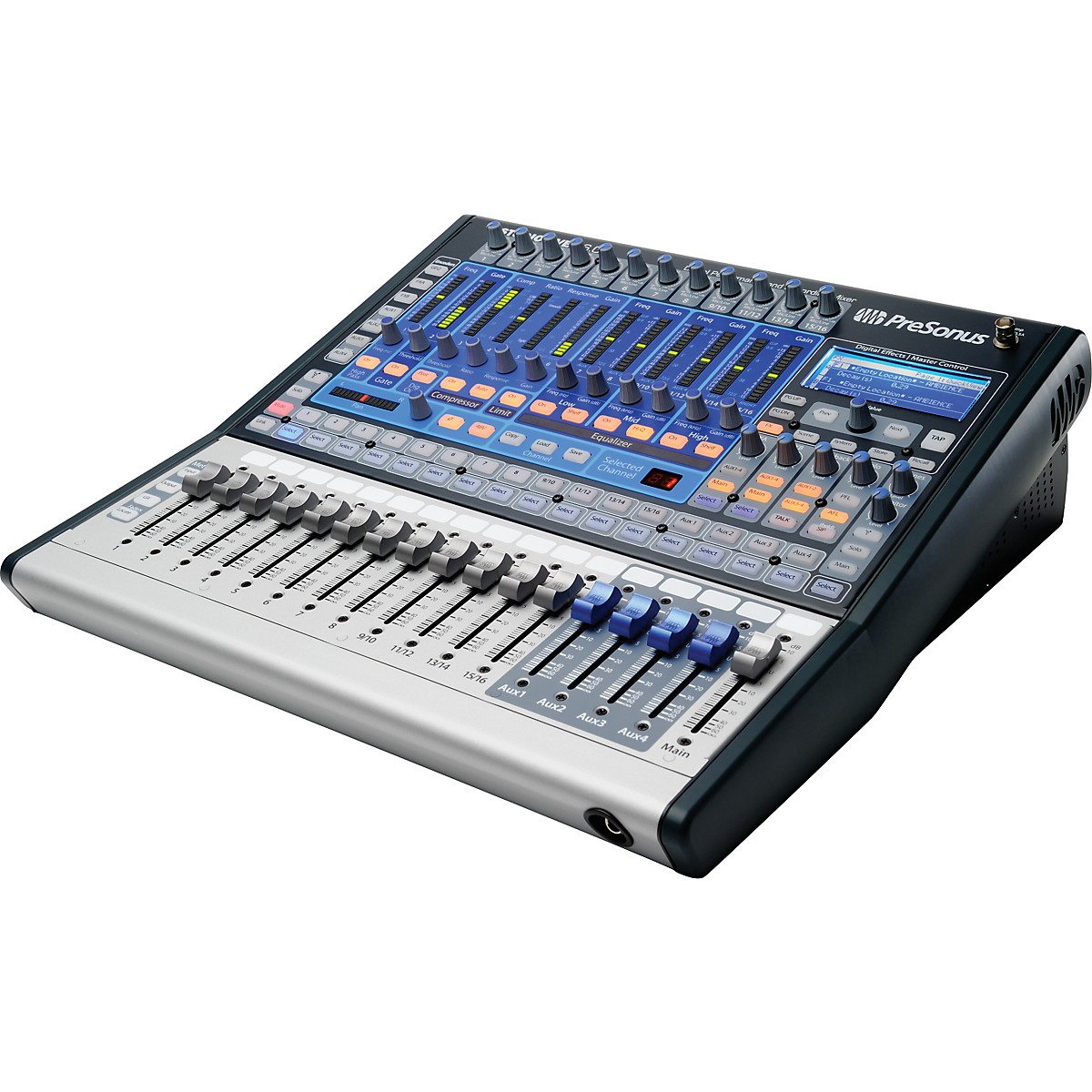 Presonus's StudioLive 24.4.2 and 16.4.2 changed the game, offering amazing performance and ease of use for a great price. Now Presonus has packed the same audio quality, performance, seamlessly integrated software (including remote control) into a smaller, even more affordable package.Small size. Bigger possibilities.In a "footprint" of less than 2...  Click To Read More About This Product

See All Presonus Digital Mixers
Out of Stock Online Please call or chat to check your local store inventory for this item.

Presonus's StudioLive 24.4.2 and 16.4.2 changed the game, offering amazing performance and ease of use for a great price. Now Presonus has packed the same audio quality, performance, seamlessly integrated software (including remote control) into a smaller, even more affordable package.

Small size. Bigger possibilities.
In a "footprint" of less than 2 square feet (0.19 m2), the compact, 16-channel StudioLive 16.0.2 offers 8 mono input channels and 4 stereo channels and provides 12 XMAX Class A solid-state mic preamps. (Well, okay, it actually has 13 XMAX preamps; the Talkback input has one, too.)

But don't let its size fool you; the 16.0.2 is jam-packed with features and processing power, employs the same workflow and easy-to-use mixing-surface design as the bigger StudioLive boards, and sounds every bit as good, with the same high-definition, wide-dynamic-range, digital converters.

The ease of analog meets the power of digital.
When Presonus designed StudioLive, one of the primary goals was to provide a familiar interface that would keep all critical controls visible and accessible - not buried inside multiple menus.

Sit down at a StudioLive 16.0.2, and you see easily accessed, color-coded function buttons for Mute and Solo; rotary trim controls; and clearly labeled, individual knobs for EQ and dynamics processing. Aux sends have their own physical controls. Every channel has a big, bright meter display. The master section comes complete with Talkback, Monitor, Cue, and a choice of control-room sources - looks just like the master section on an analog board but with far more power and flexibility.

Bottom line: If you've ever used an analog mixer, you'll be right at home with a 16.0.2. And even if you've never used a mixer before, you'll quickly be able to create professional mixes and recordings.

Discrete components - not op-amps. Presonus only use genuine transistors, resistors, and capacitors for ultra-low noise and transparency. Op-amps add noise, coloration, and harshness to a signal.

Class A circuitry. Class A circuits have no crossover distortion and deliver purer, clearer, and more musical results than the Class AB designs that are found in many preamps.

The net result of the XMAX preamp design is high headroom, low noise, wide dynamic range, extended frequency response, and - most important - musicality and transparency, with smooth highs; solid, deep lows; and everything in between.

All of that is before the StudioLive even begins to color and process the original signal. StudioLive's Fat-Channel processing has made a major splash in the pro audio industry, garnering universal acclaim for its ease of use, exacting audio integrity and ultimate musicality. With 4-band EQs, compressors, limiters and gates, DSP effects, 6 aux buses, 4 sub-groups, extensive LED metering, mixer save and recall, channel-strip save/recall/copy/paste, talkback, and more, the StudioLive breaks new boundaries for music performance and production.


JetPLL synchronization technology
Ease of use and powerful features only count if the sound quality is equally impressive. After all, it really comes down to how clean the signal path is and how well the mixing algorithms perform.

That's why you should choose a digital mixer made by PreSonus, a company already famous for its analog mic preamps, pristine digital interfaces, and well-regarded signal processors.

Ultra-high-headroom, 32-bit floating-point processing is used for all digital mixing. All analog inputs and outputs use the highest-quality digital converters available, with +118 dB dynamic range, for spectacular sonic results and unmatched musicality.

Synchronization to your computer is stable and robust, thanks to JetPLL synchronization technology. JetPLL incorporates noise shaping to virtually remove all audio-band jitter, ensuring near-perfect clock performance and optimal converter performance when networking two or more digital-audio devices. JetPLL quickly locks to any digital format through a wide range of frequencies and is extremely robust and tolerant of wide variations in clock frequencies. As a result, you'll experience better stereo separation and clearer, more transparent audio.

A gigantic console in a small package - thanks to the Fat Channel
The StudioLive 16.0.2 may be compact, but its Fat Channel is loaded with a high-pass filter on every channel and aux (22 total), phase reverse for each channel strip (12), and a gate, compressor, limiter, and 3-band parametric EQ for every channel, aux output, FX bus, and main output (24 of each!).

Engaged by pressing any Select button, the Fat Channel features extensive equalization and dynamics processing for every input channel, every aux output, the FX outputs, and the main outputs. The high-pass filter and EQ algorithms deliver extremely musical results. Also included in the Fat Channel are limiters, plus compressors and a downward expander, providing extensive dynamics control.

Not just effects. Effects you'd expect from a $600 standalone processor. You get two programmable, 32-bit floating point, stereo DSP effects engines, loaded with 50 reverb, delay, and time-based effects presets that you can really use.

The reverbs are so rich and detailed that you feel like you're there. Delays are precise. Slap echo sounds like old-skool tape effects. All 50 effects have easy-to-use parameter adjustment, tap tempo, and store and recall selection for the ultimate in creative flexibility.

The StudioLive 16.0.2 also sports a stereo 31-band graphic equalizer on the main outputs, so you can compensate for room acoustics and speaker response.

Whether StudioLive's dozens of signal processors and 50 DSP effect presets were on gigundo channel strips, in a whopping rack of outboard gear, or neatly condensed into the Fat Channel, they have a lot of settings to remember and reset at every performance. That's where the power of digital comes in: StudioLive never forgets.

What was then is now: complete store and recall.
Two factors work against getting that Perfect Mix with an analog mixer. First, the Perfect Mix can be hard to reproduce a week, day, or hour after you perfect it. And second, a good mix should be dynamic: levels, effects, and EQ should be tailored to each song or segment of the show, service, or presentation. StudioLive solves this problem by letting you save all of your digital settings for quick setup and recall.

StudioLive solves the problem getting of a Perfect Mix by letting you save all of your digital settings for quick setup and recall.

Save Scenes that include every setting on the mixer. Save just the Fat Channel settings. Copy-and-paste settings across multiple channels and buses. Save individual DSP effects for ultimate ease, speed, and control.

This means that for fixed applications like clubs, churches, and auditoriums, you can always count on the same sound. It means that you can fine-tune Scenes for different songs and call them up instantly. And it lets rank amateur volunteers run the StudioLive and achieve pro-quality sound.

Presonus has included a whole library of individual channel settings (sample listing) as starting points for optimizing the sound of instruments, vocals, and spoken word. And an Automatic AutoStore feature regularly saves your current settings in case the power fails.

And of course you can store an unlimited number of settings and scenes on your laptop with the included Virtual StudioLive software.

A glance at the StudioLive 16.0.2 rear panel reveals that "Junior" offers something the two bigger boards don't: MIDI In and Out. You can recall Scenes from a DAW using MIDI Program Changes, control the main output volume and effects level, and even mute effects between songs - all thanks to the magic of MIDI control.

Think of the possibilities for making your performances more exciting and varied - all without needing a separate soundperson.

More than a mixer: an integrated system.
The 16.0.2 integrates a 16x16 FireWire interface and comes with Capture, Studio One Artist recording and production software, and Virtual StudioLive, bidirectional control software, and it works great with the free SL Remote iPad and iPhone control apps.

Because of Presonus's powerful, integrated, free software, StudioLive digital mixers can do far more than their competition. There are three and a half parts to this unique system:
• Virtual StudioLive for laptop control and editor/librarian functions
• StudioLive Remote for iPad and iPhone (free apps used with Virtual StudioLive)
• Capture 1.1 for two-click multi-track recording and playback
• Studio One Artist Digital Audio Workstation for enhancing your recordings (or for direct recording from StudioLive 16.0.2)

Virtual StudioLive: The magic of computer control.
Written exclusively for StudioLive mixers, Virtual StudioLive (VSL) provides a complete visual representation of the mixer, allowing you to control the features with a mouse, trackpad, or trackball on a FireWire-equipped Mac or PC.

Wirelessly control auxiliary mixes with QMix.
With QMix, you can enjoy wireless remote control of any PreSonus StudioLive mixer's aux sends from up to ten Apple iPhones or iPod touches! Let performers create their monitor mixes from individual iPhones. With the Wheel of Me, you can select multiple "Me" channels and control their levels simultaneously. Requires a Mac or PC running PreSonus Virtual StudioLive. Available free from the Apple App Store.