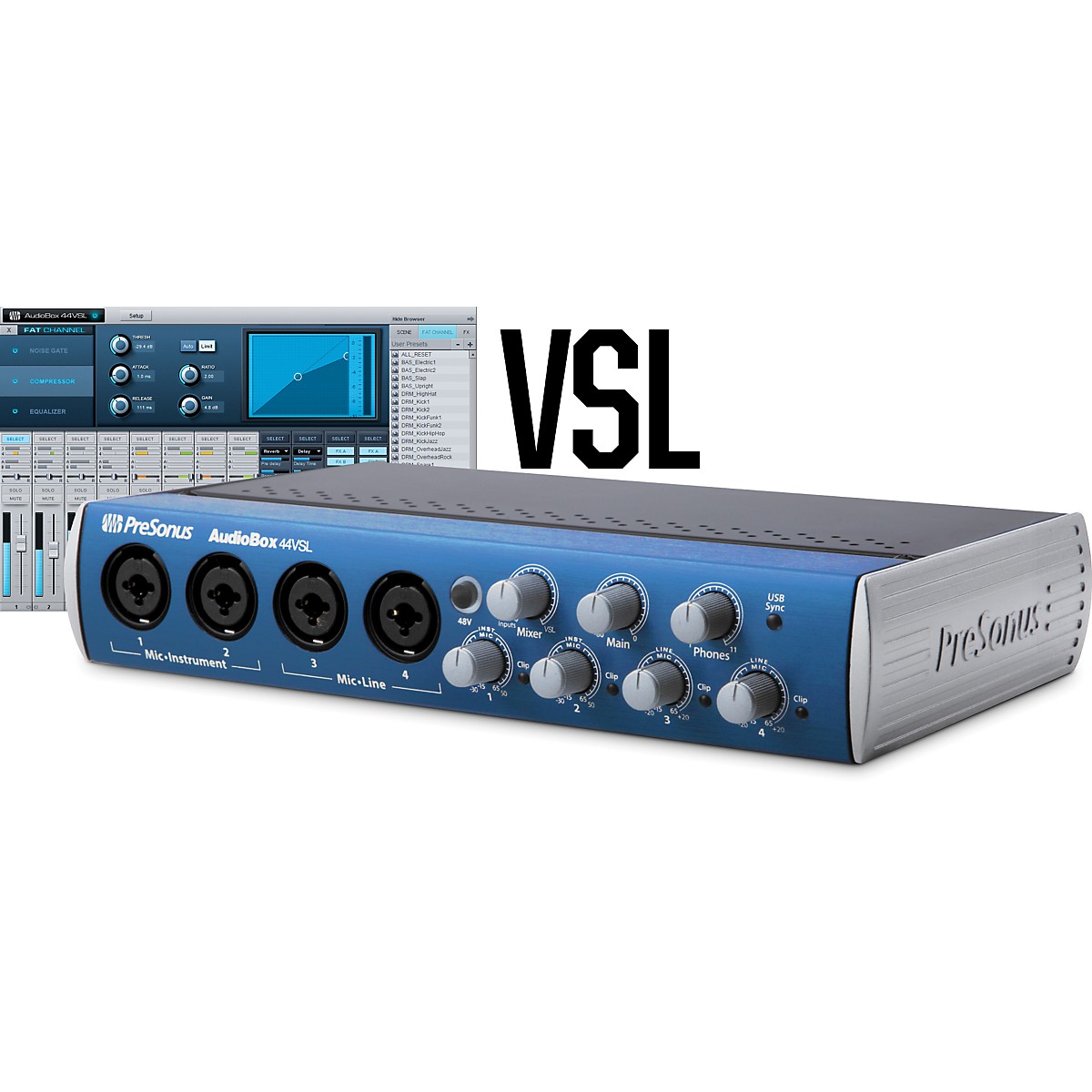 The AudioBox 44VSL is the second model in a new generation of PreSonus USB 2.0 audio/MIDI interfaces that take hardware/software integration to the logical next step. Using your computer CPU and PreSonus Virtual StudioLive (VSL) software, AudioBox VSL-series interfaces provide reverb and and delay effects and the same Fat Channel compression, limit...  Click To Read More About This Product

See All Presonus Audio Interfaces
Out of Stock Online Please call or chat to check your local store inventory for this item.

The AudioBox 44VSL is the second model in a new generation of PreSonus USB 2.0 audio/MIDI interfaces that take hardware/software integration to the logical next step. Using your computer CPU and PreSonus Virtual StudioLive (VSL) software, AudioBox VSL-series interfaces provide reverb and and delay effects and the same Fat Channel compression, limiting, semi-parametric EQ, and high-pass filter, as the PreSonus StudioLive 16.0.2 digital mixer- all with inaudible latency.

Furthermore, thanks to the power of VSL, the AudioBox 44VSL includes an 8x4 software mixer. As a result, with just an AudioBox 44VSL and your laptop or other computer running VSL, you can mix a studio session or a live show featuring, say, a guitar duo with vocals, a small band, a DJ rig with mixer and stereo synthesizer, or a panel discussion-all while monitoring and recording with or without real-time processing! And you can do it simply and easily, with no hardware mixer, no outboard effects rack, and minimal wiring, thanks to the tight integration between PreSonus hardware and software.

To top it off, while the classic PreSonus AudioBox USB is a fine-sounding unit, the new AudioBox VSL series sounds even better, with 24-bit, 96 kHz recording and top-of-the-line PreSonus XMAX preamps.

What's so great about effects and processing on monitors?

Tracking without hearing effects and signal processing is like playing a video game with your eyes closed. Musicians rely on aural cues when performing, and their performance can vary depending on what they hear in their monitors. Adding just the right amount of compression, EQ, and reverb can make a huge difference in their ability to hear themselves clearly and to experience their performance as if it occurred in a natural space rather than in the artificial sonic environment of the studio. The result is a better performance and ultimately a better recording.

You have plenty of effects plug-ins for your DAW, but processing audio with a DAW takes more time than you might think. True, we're talking milliseconds, but it's long enough that if you put DAW effects in your studio monitors, you'll hear the original sound slightly before the processed signal, which is very disorienting. That much delay might be acceptable for live gigs, where the band is playing together in an ambient space that has natural delay. But you can't record that way in the studio.

And if you like what you hear, you can record with AudioBox VSL-series effects, too! These are the same high-quality StudioLive 16.0.2 Fat Channel dynamics processors and EQs that professional musicians, engineers, and producers record with every day.

Great processors are a PreSonus tradition

PreSonus didn't invent the first audio interface with effects. They simply did it better and for less money. Sure, some interface manufacturers that don't normally make signal processors have added a compressor, EQ and a few effects to their interfaces. But the AudioBox VSL series provides all that, plus a separate limiter, expander, and high-pass filter-and PresSonus have been making high-quality signal processors since 1995. The AudioBox VSL-series' Virtual StudioLive (VSL)-based effects and Fat Channel processing have been extensively field-tested and proven popular by tens of thousands of StudioLive-series mixer users, including many top professionals.

Of great importance, thanks to VSL's drag-and-drop convenience, adding processing and creating and loading presets is easy. Pro-level processing and superior ease of use mean you'll get better results and have more fun!

High-end sound
Compact and rugged, the AudioBox 44VSL offers two convenient front-panel mic/instrument combo inputs and two mic/instrument combo inputs, global phantom power, and a total of six line-level outputs. It sports the same high-headroom, Class A XMAX preamps as the StudioLive mixers and has 24-bit, 96kHz converters with 114dB dynamic range for clear, clean audio. And it boasts PreSonus' legendary 150mW headphone output, which is loud enough to explode the oysters in a Po'-Boy sandwich. (Be careful with your level control!)

The superior sound of PreSonus preamplifiers has long been a major reason that so many audio professionals prefer PreSonus interfaces. The XMAX is the finest solid-state preamplifier we make, offering three key advantages:

* 1. High Voltage. The XMAX preamplifier runs on power rails of 30V. Most off-the-shelf, op-amp-based designs run on power rails of 10V to 18V. Higher-voltage power rails deliver more headroom, deeper lows, smoother highs, and a richer overall sound.
* 2. Discrete components - not op-amps. We only use genuine transistors, resistors, and capacitors for ultra-low noise and transparency. Op-amps add noise, coloration, and harshness to a signal.
* 3. Class A circuitry. Class A circuits have no crossover distortion and deliver purer, clearer, and more musical results than the Class AB designs that are found in many preamps.

The net result of the XMAX preamp design is high headroom, low noise, wide dynamic range, extended frequency response, and-most important-musicality and transparency, with smooth highs; solid, deep lows; and everything in between.

Built for the rigors of the road
PreSonus gear has a well-earned reputation for extreme roadworthiness, and the AudioBox 44VSL is no exception. It employs a heavy-duty steel case that is every bit as rugged as that of the smaller AudioBox 22VSL and original AudioBox USB-the unit PreSonus famously stomped, kicked, and drove over with a full-size truck before using it to make a very nice recording. (You can witness this in the video AudioBox USB Built for the Road.) Now that's what we call "roadworthy." And it fits in a half-rackspace and can be screw-mounted to a standard rack tray (not included).

The flexibility and power of software
VSL enables you to easily manage the processing and mixing from your Mac or Windows PC and provides editor/librarian functions, making it simple to create and use a library of presets. To get you started, ProSonus included the same library of more than 50 Fat Channel presets that comes with StudioLive mixers. These presets were created by professional musicians and engineers and let you instantly set up dynamics processing and EQ for vocals, guitar, and much more.

Seamlessly integrated with the included Studio One Artist DAW and VSL, the AudioBox 44VSL interface works with virtually all Mac and Windows audio-recording software. And unlike most things nowadays, it's very easy on your budget.