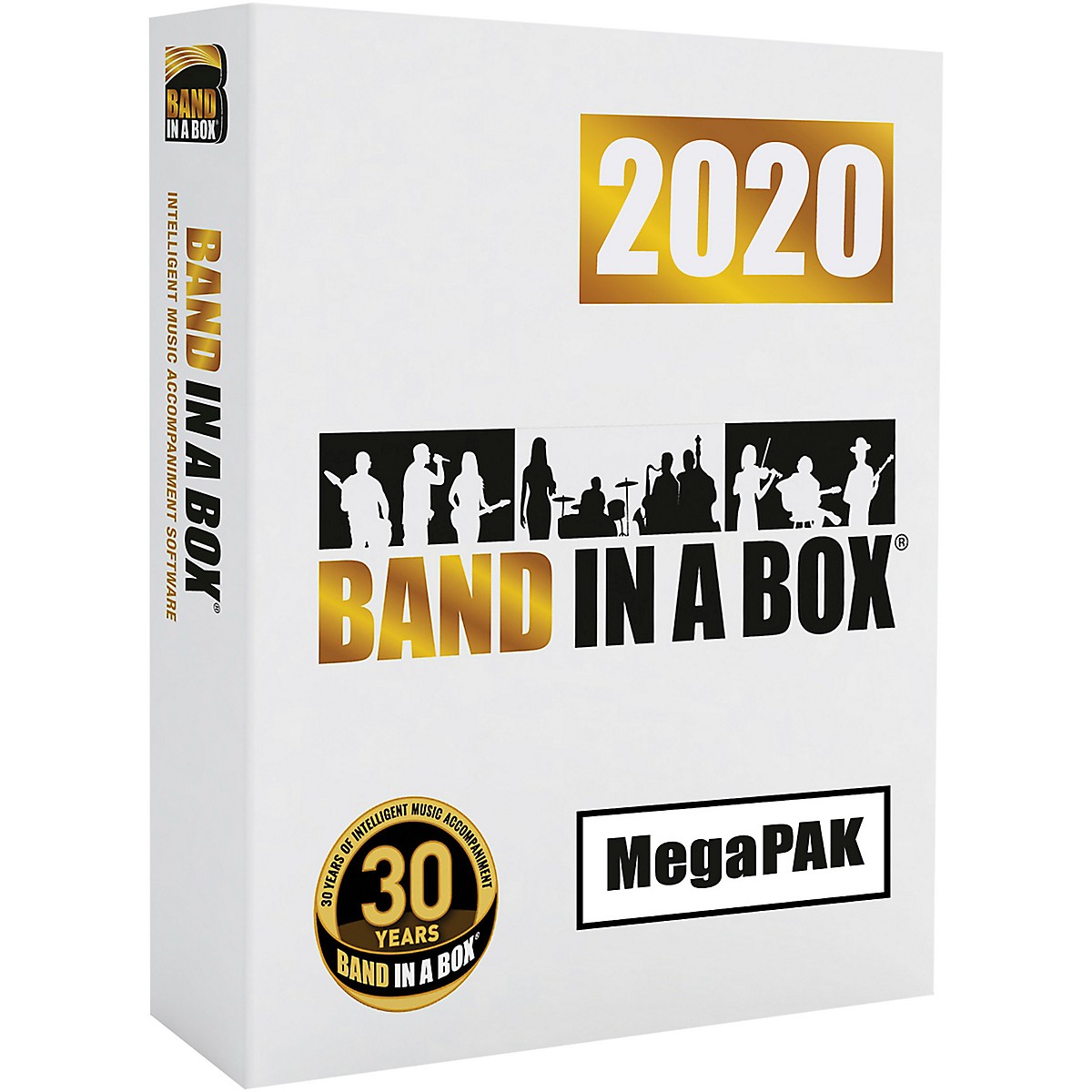 PG Music Band-in-a-Box MegaPAK 2020 is award-winning software for auto accompaniment and style-based music creation. Perfect for musicians, songwriters and educators, Band-in-a-Box lets you easily create backing tracks for your songwriting and vocal performances. Or, use Band-in-a-Box to create jam tracks for practicing solos and improvisation. You...  Click To Read More About This Product

PG Music Band-in-a-Box MegaPAK 2020 is award-winning software for auto accompaniment and style-based music creation. Perfect for musicians, songwriters and educators, Band-in-a-Box lets you easily create backing tracks for your songwriting and vocal performances. Or, use Band-in-a-Box to create jam tracks for practicing solos and improvisation. You can also use it as a powerful songwriting tool. Band-in-a-Box MegaPAK 2020 automatically creates pro-quality backing tracks in a wide variety of popular styles including rock, pop, country, folk, Celtic, blues, jazz, Latin and bluegrass styles. You can also create your own hybrid styles.


There are over 50 new features in Band-in-a-Box MegaPAK 2020. There are enhancements to RealTracks (Smoother Sounding Vocal RealTracks, RealTracks Thickening, "Find-a-Sub" RealTracks and MultiRiffs). Most RealDrums now have RealCharts (with accurate Drum Notation). There's a new RealTracks Artist Browser to find info/bios/links/lists of RealTracks on all the artists. A new Feature Browser allows the new or "forgetful" user to easily find and use most features/hotkeys/docs from a single window. Equalize Tempo allows changing a recorded rubato song to a fixed tempo. Enhanced audio time/pitch stretching (Élastique) included. There are SongPicker enhancements, Bass/Drums or Drums only Auto-Intros, 3,400 titles added, MusicXML enhancements, "Left-Handed" and "Student View" guitar, Drag and Drop enhancements, Audio Chord Wizard Multi-Window Display, and more.

There are over 40 enhancements to the Band-in-a-Box DAW Plugin. Upgrades include Audio Harmonies (apply to any DAW audio track, 1–4 voices, using intelligent BIAB harmonies with passing tones). New features allow Customizing Tracks, Bar and Song settings. There are sound improvements (gap filling, thickening) for RealTracks and RealDrums. Plus, there are enhancements for reading/writing more data types to/from BIAB song files and more.

There are over 20 additions to RealBand, including intelligent Audio-Harmonies, Scrub Mode, mixer enhancements, open MusicXML .musicxml and .xml, easier transpose, RealTracks, RealDrums sound improvements, and more. The Band-in-a-Box program, DAW Plugin and RealBand can all use the new RealTracks, RealDrums, MIDI and style content.