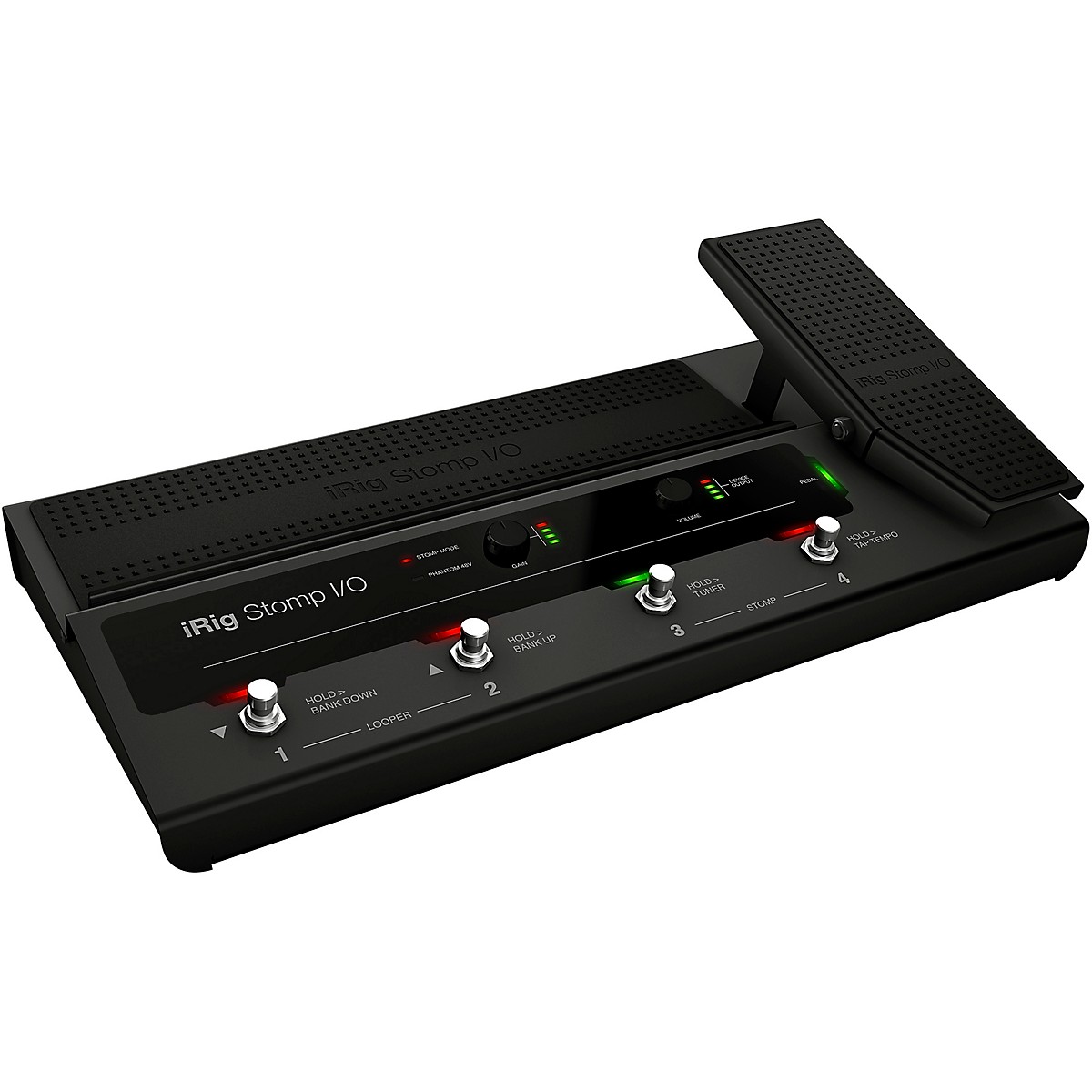 The IK Multimedia iRig Stomp I/O is a different type of USB pedalboard controller that integrates a professional, high-resolution, MFi-certified audio interface with MIDI input/output for iPhone, iPad, Mac and PC. It comes bundled with state-of-the-art guitar, vocal processing and recording software for flexibility and usability, both live and in t...  Click To Read More About This Product

The IK Multimedia iRig Stomp I/O is a different type of USB pedalboard controller that integrates a professional, high-resolution, MFi-certified audio interface with MIDI input/output for iPhone, iPad, Mac and PC. It comes bundled with state-of-the-art guitar, vocal processing and recording software for flexibility and usability, both live and in the studio.

Sturdy and robust, yet easily transportable, iRig Stomp I/O features four onboard metal stomp switches plus an expression pedal with a switch, all with LED indicators. To further extend its control possibilities, you can connect up to 2 additional switches or pedals. The MIDI IN/OUT ports make it possible to seamlessly control external processors when iRig Stomp I/O is used as a stand-alone MIDI foot controller, without any device or computer connected to it.

The Neutrik 1/4" XLR combo jack accepts instruments and microphones including condenser mics with switchable 48V phantom power. The balanced stereo output connects to an external amp, mixer or PA, and a 1/4" stereo headphone output is available for silent monitoring. The input gain and volume output knobs are easily accessible on the front panel, each with its dedicated LED VU-Meter indicator, for the quick-and-easy setting of levels.

iRig Stomp I/O also takes the concept of versatility to a whole new level, by combining a smart, hi-tech hardware system with an incredible collection of complete, professional software and apps.

Ready to rock, ready to record
iRig Stomp I/O boasts an elegant all-in-one design that perfectly highlights its flexibility and versatility. In a single piece of equipment, you now have everything you need to record in the studio, rehearse, or go out on stage and gig, without having to assemble a bulky and costly hardware setup.

With its high-quality 96kHz/24-bit audio interface, iRig Stomp I/O lets you easily record your guitar, bass or microphone - including studio condensers requiring 48VDC phantom power with true studio quality on iPhone/iPad, Mac and PC. The seamless integration with AmpliTube and VocaLive makes it as easy as plug-and-play to record on multiple devices using IK’s powerful, state of the art, 64-bit software. iRig Stomp I/O features a Class A preamp that can rival, if not surpass, the sound quality of floor processors costing up to three times as much.

As a floor controller, iRig Stomp I/O features an onboard expression pedal and four foot switches, allowing you to seamlessly flip through your favorite presets for natural, hands-free performance. The two optional control inputs let you connect up to two additional external pedals/switches. To further extend your control possibilities, you can exploit its MIDI functionality to send MIDI control messages via its MIDI OUT to your external gear and processors, using iRig Stomp I/O as a MIDI interface or as a stand-alone controller (even without a device).

Ideal for guitar, bass, vocals and synths
iRig Stomp I/O is designed to give guitarists, both electric and acoustic, bass players, vocalists, and songwriters a new way to have full control over their tone, in any situation.

Seamless software integration
iRig Stomp I/O is designed to seamlessly integrate with AmpliTube for Mac/PC and iOS as well as with VocaLive for iOS, for full-blown performance in the studio and live.

While using AmpliTube or VocaLive with iPhone, iPad, Mac, PC and PC tablets like Microsoft® Surface, you can easily browse your tone presets, preset banks, control wah processors in real time using the integrated expression pedal, as well as quickly access useful functions like the Looper, the Tuner, and more.

iRig Stomp I/O gives you the unique advantage to have the very same sound on stage as in the studio, with full preset portability.

Work out of the box
Bundled with professional software, iRig Stomp I/O encompasses the right tools for all kinds of musical needs.

It puts all the power of AmpliTube 4 Deluxe – the world’s best sounding guitar amp and FX modeling and vocal processing software right at your feet, with a collection of over 160 gear models for Mac/PC and 70 for iOS.

Electric guitarists and bass players can also unleash the full power of AmpliTube for iPhone and iPad, while acoustic guitarists can shape their tone with AmpliTube Acoustic for iOS and singers can experiment with VocaLive and give their vocals some mojo with Mic Room. Plus, anybody can post-process their recordings using four select processors from IK’s flagship T-RackS 5 mixing and mastering suite (the White 2A, Black 76 and VC-670 compressors, the EQP-1A equalizer and Mic Room), for authentic analog studio sound.

Unlike most floor controllers which are self-contained, closed systems, iRig Stomp I/O is also easily updatable as new software and features are released, making it a future-proof system that easily competes with high-end pedalboards.

With your device or stand-alone
A unique advantage of iRig Stomp I/O is its plug-and-play ease of use. As an MFi certified audio interface, it is designed to work right out of the box with your iPhone and iPad using the included lightning cable as well as with Mac and PC via USB.

It is the only floor controller to feature a convenient device bay, where you can safely position your iOS device—charging it during use—for an immediate and clear view of the interface. Used with PC tablets like Microsoft Surface, you can take advantage of the touchscreen interface for enhanced speed and flexibility in creating and tweaking your tones.

iRig Stomp I/O can be used without a device as a stand-alone MIDI foot controller that can be integrated with regular hardware rigs and used to control outboard processors that accept MIDI patch change and continuous controls.

Built-like a tank, road-ready
iRig Stomp I/O is built to last, boasts an elegant design, features a sturdy metal chassis and has no fear of the road since it is compact and easily transportable. Like most IK Multimedia products, it is made in IK's Modena factory and offers the renowned quality and craftsmanship of products made in Italy.

If you want to hit the road in style, there is a sleek iRig Stomp I/O travel bag available.