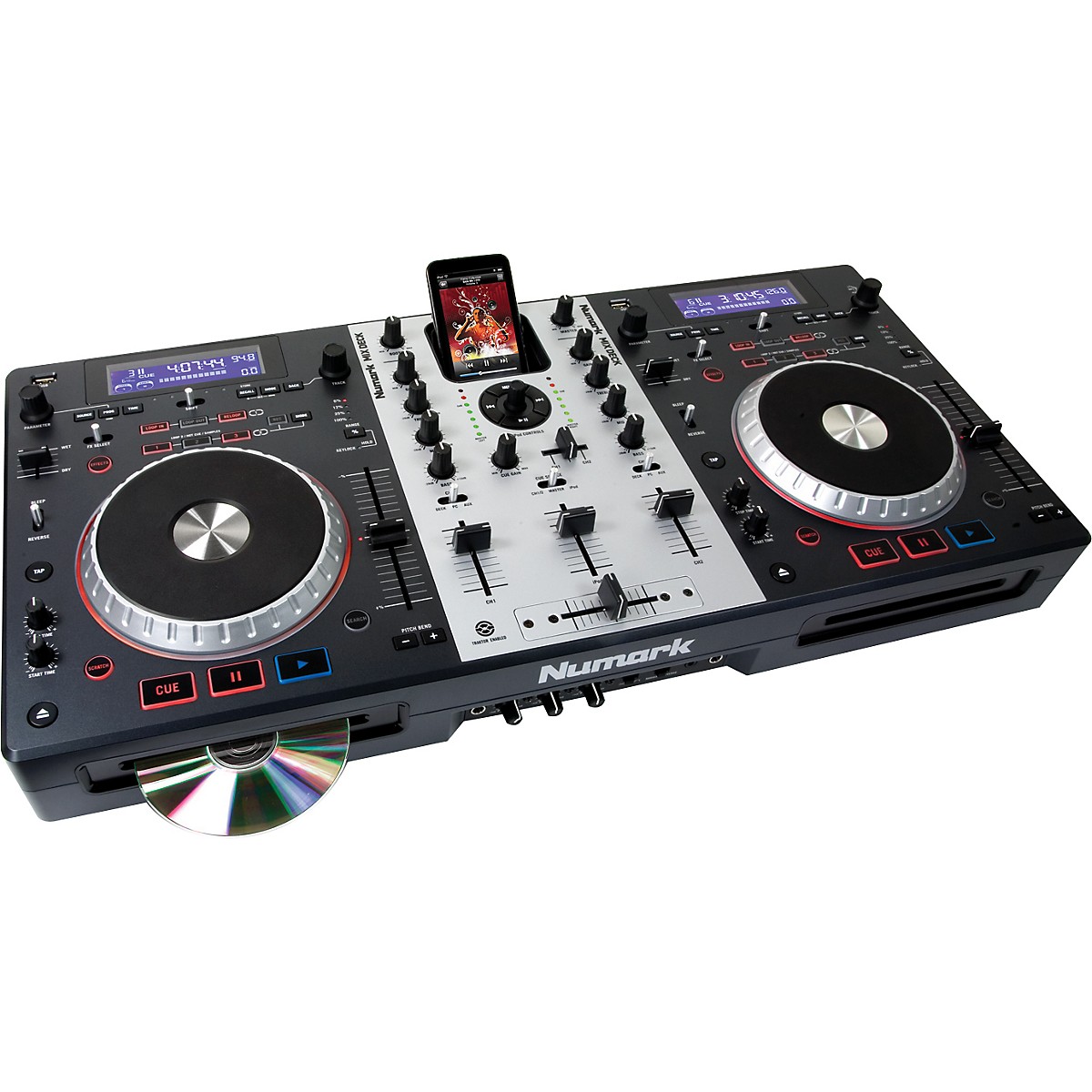 The Numark MixDeck Universal DJ System is a complete DJ controller and performance station for the DJ who blends different kinds of music sources. Whether your music is on CDs, MP3 CDs, USB flash drives, an iPod, your computer, or even other analog players, you can mix and perform it all using the Numark MixDeck. The all-on-one Universal DJ System ...  Click To Read More About This Product

See All Numark DJ Controllers & Interfaces
Out of Stock Online Please call or chat to check your local store inventory for this item.

The Numark MixDeck Universal DJ System is a complete DJ controller and performance station for the DJ who blends different kinds of music sources. Whether your music is on CDs, MP3 CDs, USB flash drives, an iPod, your computer, or even other analog players, you can mix and perform it all using the Numark MixDeck. The all-on-one Universal DJ System has the traditional layout of 2 decks and a mixer and is packed with features that blend the time-honored DJ equipment design with Numark innovation.

Formatting freedom:
The Numark MixDeck has 2 large, touch-sensitive, illuminated platters plus controls for cueing and scratching your music. Each smooth, fast, reliable, slot-loading drive works with both CDs and MP3 CDs. The Universal DJ System lets you connect a USB flash drive on each deck for access to thousands of MP3s without taking a computer or your CDs to the gig.

These advanced decks aren't just MP3/CD players though”they also work as software controllers. Just connect the Numark MixDeck Universal DJ System to your Mac or PC with a single USB cable and you can seamlessly control the music on your computer. The MixDeck's MIDI communication enables you to easily map virtually any DJ software for direct connection from your fingers to the software.

The Numark MixDeck's USB connection can also receive 2 stereo audio channels from your computer, empowering you to mix software audio with CD tracks. MixDeck also has an integrated Universal Dock for an iPod so you can play tracks from your iPod and even record your set into the popular portable music device. The MixDeck has a dedicated iPod fader, physical transport and menu controls, and a click knob so you won't have to touch the iPod once it's docked. (All iPod docking models are compatible with the Numark MixDeck.)

Mighty Numark DJ Mixer:
The Numark MixDeck Universal DJ System has a full-featured DJ mixer already built-in. Each input channel has its own gain and 3-band EQ/rotary kills (+12dB/ -INF). The mixer channels control the audio from the MixDeck's onboard players, incoming audio from your computer, or external sources such as turntables, MP3 players, and more. The Numark MixDeck has 2 sets of stereo, switchable phono/line inputs for external sources. Its replaceable crossfader has switchable slope and reverse so you can customize its performance based on your preferences.

Work the room thanks to MixDeck's 1/4" mic input with its own gain and ±15dB high and low EQ. The Numark DJ mixer also gives you a complete cueing section with dual 1/8" and 1/4" headphone outputs, dedicated cue gain, and mini-crossfader control. You can keep an eye on your master output levels with MixDeck's dual-color stereo LED meters.

The Numark MixDeck Universal DJ System has a flexible output section too with balanced XLR and unbalanced RCA stereo Main outputs, as well as Booth and Record outs for sending your mix to different locations and systems, including recording to your iPod. There's also a direct stereo output from each deck for use with timecode control interfaces including Serato Scratch LIVE software or external effects processors.

Delightful decks:
The Numark MixDeck's advanced platters are touch-sensitive for superb accuracy and smooth control of tracks on discs, flash drives, and software. The platters' outer rings illuminate for visual indication of deck performance and mode. You can adjust the MixDeck's players to perform just like vinyl on turntables thanks to their independent start and stop-time controls on each deck.

FX flavor:
On top of playing all kinds of music media, each one of the Numark MixDeck's decks enables you to add flavor to your performances with integrated, beat-synced DSP (digital signal processor) effects that include chop, echo, filter, flanger, pan, and phaser. Each is completely adjustable, and a dedicated wet-dry fader controls them all.

Pitch power:
The MixDeck contains a set of beat and pitch tools that will help you with beat matching and harmonic mixing. Start playing a track and the MixDeck automatically analyzes its BPM (tempo of beats per minute), and displays it onscreen. There's also a Tap tempo button for manual BPM entry. You can alter the track's BPM by ±6, 12, 25, and 100% using the pitch fader. For each of those ranges, you can also engage Key Lock, which holds the pitch (key) of the track while you independently manipulate its BPM. There's also a set of pitch-bend buttons on each track for quick tweaks.

Realtime remixing:
The Numark MixDeck Universal DJ Station gives you a complete range of remixing tools for on-the-fly creativity, including seamless looping on a set of easy-to-understand controls, sampling, and easily accessible hot cues. Numark's familiar Bleep/Reverse gives you the ability to keep time moving forward while you cut or reverse the track.

You can play tracks from discs in single-track, continuous, and programmable playback modes for flexible performance. For effortless transitions, the Fader Start enables the Numark MixDeck to start playing the track you have cued up when you move the crossfader. You can also use Fader Start with compatible CD players connected to the MixDeck's inputs.

Vivid view:
The Numark MixDeck DJ Controller features two large, backlit displays for keeping tabs on each deck even in poorly lit conditions. You can monitor BPM, CD and MP3 text tags, navigate folders, and keep an eye on effect status on its big, bright screens.

Overall, the MixDeck gives you the ability to perform, mix, remix, and record with virtually any popular music media. Whether you play parties, clubs, events, or in a group, the Numark MixDeck Universal DJ Station gives you the freedom to DJ all in one piece of DJ equipment, with the flexibility to add on and expand as you like.