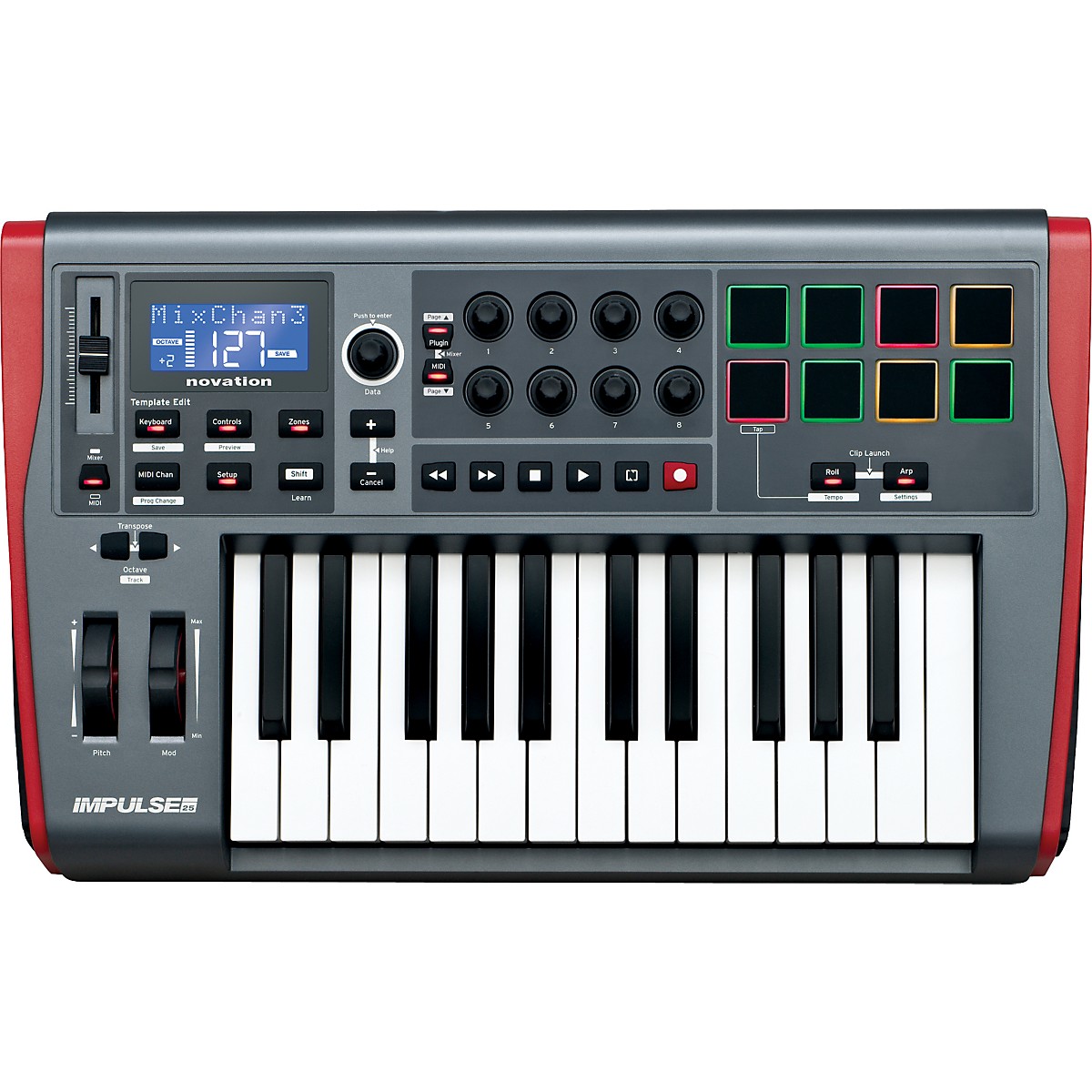 Novation's Impulse series are a range of professional USB/MIDI controllers. The Impulse 25 has a 25-key precision keyboard and full control surface powered by a brand new version of Novation's Automap control software - Automap 4 (which makes getting hands-on with your DAW/plug-ins fast and simple). Impulse also has 8 back-lit drum pads which can w...  Click To Read More About This Product

If one or more of the items you ordered weighs less than 1 lb. is shipping to a PO Box or, if the order is held for credit card verification, it may take more than five buisness days to arrive.
WARNING: This product can expose you to chemicals including Lead, which is known to the State of California to cause cancer, and Lead, which is known to cause birth defects or other reproductive harm. For more information go to www.P65Warnings.ca.gov.

Novation's Impulse series are a range of professional USB/MIDI controllers. The Impulse 25 has a 25-key precision keyboard and full control surface powered by a brand new version of Novation's Automap control software - Automap 4 (which makes getting hands-on with your DAW/plug-ins fast and simple). Impulse also has 8 back-lit drum pads which can warp arpeggios, roll beats and launch clips in Ableton live.

"Player's" keyboard
Impulse has a precision 'players' keyboard. It is semi-weighted with assignable aftertouch and has been designed to feel like an instrument rather than a computer peripheral. In addition to feeling good, it is incredibly accurate - this means it can translate musical expression (how you play the keyboard) extremely effectively. So your performance is reflected exactly by the synth or software instrument you are triggering.

Many MIDI controllers have knobs, faders and buttons, but using them is difficult and time consuming. Impulse (as with all Novation controllers) comes with Automap control software. This gives you instant mapping to the things you need to control, meaning you can make full use of faders, knobs and buttons on Impulse to get hands-on with your music software.

Automap Control Software - instant mixer, transport and plug-in control
Automap is a piece of software that comes with all Novation controllers. It makes it fast and simple to control your music software with knobs, buttons and faders. It has been used by many top musician/producers since 2006.

Impulse gives you control over the mixer, transport and plug-ins of all major DAWs, as well as plug-in instruments and effects that don't come with your DAW, like Native Instruments, Waves or FXpansion. Automap enables you to see instantly which knobs, faders and buttons are controlling which part of your software. It also makes it easy to quickly change what the knobs are controlling.

See what you are controlling
Automap has a software edit page that looks just like the Impulse control surface. This labels what each knob, fader and button is controlling, because with so many things in your DAW and plug-ins, it is easy to lose track of what is assigned to what. You can hide this window once you are finished with it, so you can continue making music.

Get instant control
Impulse's controls can be used to control your plug-in instruments and effects. When you open a software instrument/effect, the 8 knobs will already be linked to things in it. If you want to control different things, just press the ˜Learn' button, click on the software thing, and wiggle the knob that you want to control it. This way you can get hands on control of exactly what you want almost instantly.

Impulse has 8 drum pads which are velocity-sensitive - with aftertouch! These are back-lit with 3-colour LEDs which means they can do things other drum pads can't¦

Ableton Live Clip Launch
Impulse comes with Ableton Live Lite included - but if you are already an Ableton user, you will appreciate the power of this. The 8 drum pads can be used to launch clips in Live. The three colours indicate whether a clip is loaded (yellow), playing (green), or recording (red). This makes Impulse the best keyboard for Ableton Live users without exception.

Arpeggiator Warping
Impulse has a built in Arpeggiator which enables you to play a turn any chord into an arpeggio. The drum pads take this a step further by enabling you to warp arpeggios. By switching the 8 pads in or out you can change the rhythm of the arpeggio in real time (this works brilliantly with drums!) You can also change the speed, shape, syncopation and gate time of the arpeggio.

All Novation Keyed controllers and Launchpad Pro now come with a choice from 1 of 4 XLN Audio Addictive Keys VST. Available for new and existing customers, the Addictive Keys virtual instrument from XLN Audio is on the house when you register your controller keyboard. One full license per account gives you one Addictive Keys instrument. Pick from Modern Upright, Studio Grand, Electric Grand or Mark One.

Beat Roll
Drum pads are great for playing drums! With Beat Roll you can hold on to the pad and create a roll - because the pads are pressure sensitive you can change the volume of the drum as it is rolling, just by pushing down on the pad. This enables some really cool performance tricks!

Works with all major DAWs:

In addition to the major DAWs, Impulse & Automap 4 have been specially designed to give you full control of 3rd party plug-in instruments and effects, like Native Instruments, Waves or FXpansion.

Impulse will also work with other DAWs such as Studio One, Garage Band and FL Studio.

Specifications
Pro Coverage
Manufacturer's Warranty
Warranty Statement
All Novation products are built to the highest standards and should provide reliable performance for many years, subject to reasonable care, use, transportation and storage.

In the event of a Manufacturing Defect becoming evident within 12 months from date of purchase Novation undertakes that the product will be repaired or replaced free of charge if the product is returned to the authorised dealer from whom it was purchased. In these circumstances, or if you need an out-of-warranty repair to your Novation product, please contact Novation at: mickg@novationmusic.com and you will be advised of the correct return procedure.

Alternatively contact the Novation Reseller from which you purchased the product or the Novation Distributor in your country of residence or business. If you purchase a Novation product outside your country of residence or business you will not be entitled to ask your local Novation Distributor to honour this Limited Warranty, although you may request a chargeable repair.

Alternatively, the unit may be returned at your cost to the dealer you purchased the unit from so that they can organise a Warranty repair with their Novation Distributor.
This Warranty does not include cost of shipping to and from the authorised dealer from whom it was purchased. In every case it will be necessary to provide the original invoice or store receipt to accompany the defective product to the supplying dealer. This Limited Warranty is offered solely to the first purchaser of the product from an Authorised Novation Reseller (defined as a reseller which has purchased the Product directly from Novation in the UK or its Authorised Distributors outside the U.K,) and is not transferable.

This Warranty is in addition to your Statutory Rights in the country of purchase.

Please note: A Manufacturing Defect is defined as a defect in the performance of the product which may be expected from a reasonable interpretation of the published description and performance specifications as published by Novation. This does not include damage caused by post-purchase transportation, storage or careless handling, nor damage caused by misuse.

A significant proportion of products returned under Warranty (which are very few in number compared to numbers sold) are found not to exhibit any fault at all. Please check that the mains voltage is correctly set for your local supply and that your connecting cables are in good order and correctly connected.

If in doubt about the product functions please read the user guide and if necessary contact your dealer for advice before returning the product to the supplying dealer. You can also contact us for general advice.