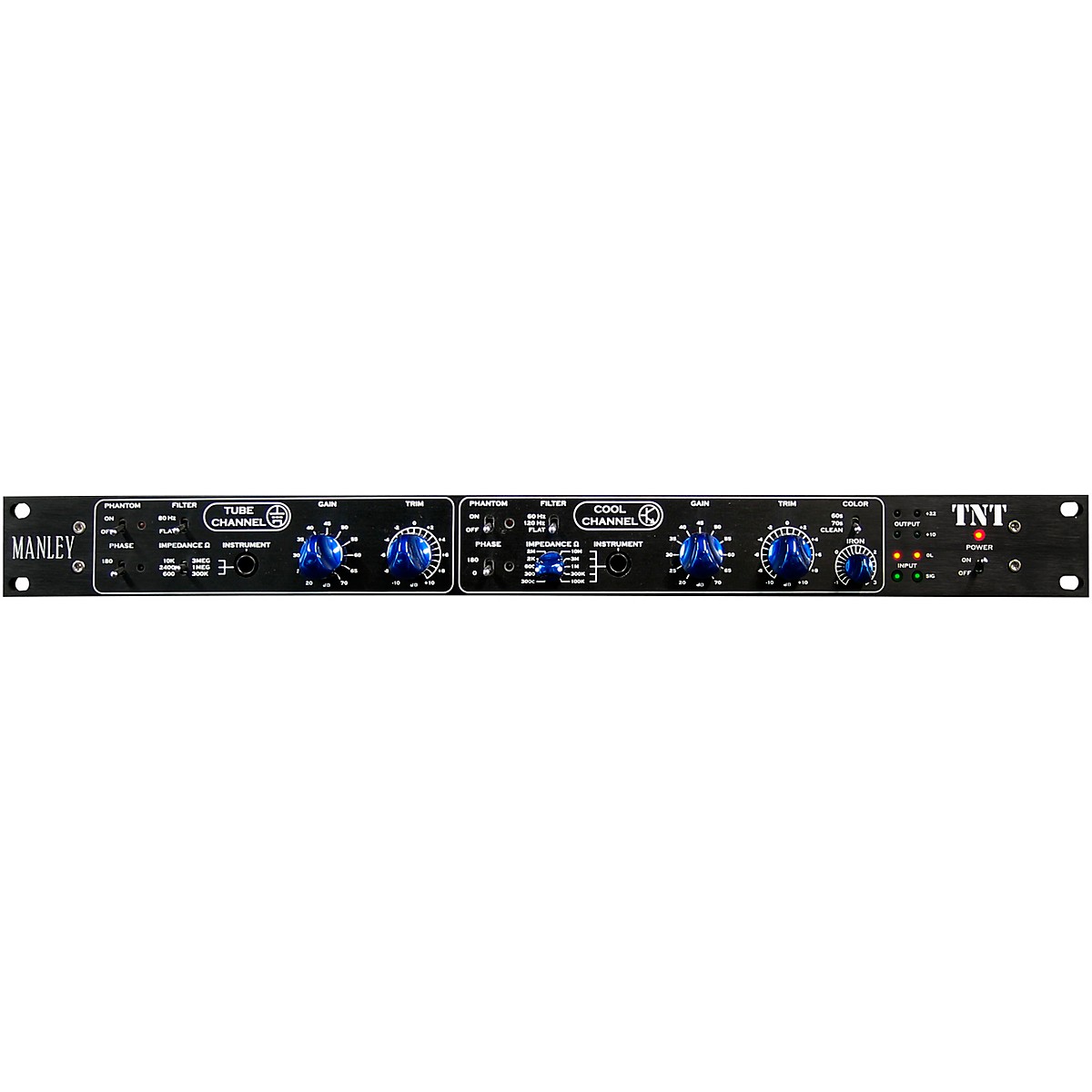 The Manley TNT (Tubes - No Tubes) 2-Channel Mic Preamp has two different and discrepant mic preamps in one box for two different sound colors. By popular demand, one channel is the exact same mic pre as in the Manley SLAM! with tubes and transformers. The second preamp is a fresh "No Tubes" design from Hutch and is inspired by old British console p...  Click To Read More About This Product

The Manley TNT (Tubes - No Tubes) 2-Channel Mic Preamp has two different and discrepant mic preamps in one box for two different sound colors. By popular demand, one channel is the exact same mic pre as in the Manley SLAM! with tubes and transformers. The second preamp is a fresh "No Tubes" design from Hutch and is inspired by old British console preamps with a tasty combination of "No Tubes" design with transformers. This one is not a clone of anything preexisting. It is a new flavor but reminiscent of that classic discrete sound. Both channels on the Manley TNT preamp are designed around the basic goal of "just plug a mic in and it sounds great." The tube channel excels on traditionally difficult sources like some bright guitars, reed and brass, cymbals and some vocals. The "No Tubes" channel might be more suited for smoother vocals, drums, bass and raunchy guitars, but you never really knows which preamp is best for the job at hand until you try them. At least you'll have two qualified candidates in one handy 1U chassis.

The Manley TNT is a new concept in microphone preamplification for those who don't always need stereo everything but often need choices and often need the best. Besides, you probably have a number of typical stereo preamps and are still looking for that one killer preamp.

Manley participated in 3D Audio's "Preamps in Paradise" forum, which was a remarkable opportunity to discuss preamps in depth and more importantly listen to what top engineers liked, disliked, and desired in the next generation of preamps. Manley Labs saw a need for a different unit that truly offered a rainbow of high-end preamp colors at an affordable price. The "T" (Tubes) channel starts off with the highly acclaimed vacuum tube micpre from the SLAM! that is certainly a contender amongst the best cost-no-object tube preamps. The "NT" (No Tubes) channel adds a no-compromise solid-state preamp that sets new sonic standards. Because the solid-state side uses two opposite topologies in tandem that are user controllable, it is like getting two preamp 'sounds' on that side alone.

The number one request was variable input impedance somewhat tempered by the number one complaint that so far, the typical gain changes associated with that feature were not fun. Manley offers variable impedance done right, with typically near-zero gain changes. In fact, on the solid-state side a current-mode preamp is used for the lowest impedance and a voltage mode preamp is used for the highest impedance, and these two preamps are appropriately blended for the medium impedance settings. All of the microphone signal is used and almost none thrown away. Both the voltage-mode and current-mode stages are truly optimized and when one changes impedance settings, one hears the effects of how this changes microphone and cable characteristics as opposed to other approaches which mostly take the mic preamp out of its ideal conditions. In other words, doing variable impedance the right way required fresh, new, and clever circuits and topologies. Manley also added a 3-way impedance switch to the tube side that also compensates for the typical gain changes.

Another request the engineers requested was to have a switch to bypass the output transformer. Manley went a step further and put that concept on a knob so that the engineer could dial in the amount of "Iron" which is a novel and inventive approach. With the knob centered at 12:00, you get the basic untouched sound of the output transformer, and like an EQ for cut, turning the knob counter clockwise, reduces the effect of the transformer thru zero and into the negative zone or 'anti-iron'. Of course, turning the knob clockwise allows one to exaggerate the transformer effect to about triple. This is not a simulation and truly is based on the actual output transformer and leans more towards subtle than an obvious effect.

A third request involved Input and Output controls so that the engineer could create some overdriven effects one day and keep it clean the next. Again Manley saw this as an opportunity to figure this out and finally do it right. So they added a toggle switch to that idea and labeled it "Clean", "60's" and "70's". "Clean" is very clean, very low noise, very accurate and very musical. Both the "60's" and "70's" positions introduce discrete class-A circuits for vintage colors, controlled overload characteristics and creative opportunities. Essentially this gives a range from incredibly clean thru subtle warmth or 3D-like thru to heavy grunge. Now you are beginning to appreciate how a single 1U box can provide a rainbow of tone especially when each aspect is done to Manley Labs' standards.

The Manley TNT is a remarkable and desirable tube preamp on one side and its equivalent in solid-state on the other side. These are not simulations, not samples, nor are they a clone or a toy. It is really good ol' analog done right.

The first request for the microphone preamp and what started the project, was two-part: 1) Provide the SLAM! Mic Pre, by itself at a great price and 2) don't abandon the concept of a basic preamp where "one just plugs in a mic and it sounds great" (without needing to adjust 6 controls). The solid-state side helps keep the price reasonable while providing a much bigger range of colors and options and while there a few more knobs and switches, their action tends to be subtle and intuitive while difficult to dial in a bad setting. You don't have to tweak, but if you want to, it's there without much possibility of going wrong. Now there is a challenge: Give me a really useful range of colors because I don't want to buy 6 preamps, yet it's gotta be fast and safe to operate, and not too expensive, please, but you had better give me Manley quality.

Of course, all the usual front panel features: phantom power, phase switch, HP filters, LED overload and level indicators, and instrument inputs are there. Phantom is soft-switched and shunt regulated for lowest noise. (There are 6 low noise shunt regulators, and 5 standard regulators in the solid-state side). The High Pass Filter is an improved approach, but suffice it to say that with it bypassed, the preamp is designed to have almost DC response (.01Hz) at all gain settings. The LED meter is set up to indicate first and second stage clipping, even though the output is capable of greater than +30 dBu (70 volts peak to peak into 50 ohms from the solid-state side actually!). Both the current mode and voltage mode preamps sport EIN (equivelent input noise) numbers of 130dB, very close to the theoretical minimum noise possible. So this thing is gravely quiet!

And for the true connoisseurs, the mic preamps don't suffer at the highest (80 dB) or lowest (10 dB) gain settings, however you connoisseurs might be disappointed that this level of performance won't be exclusive and only available for the elite or very wealthy.