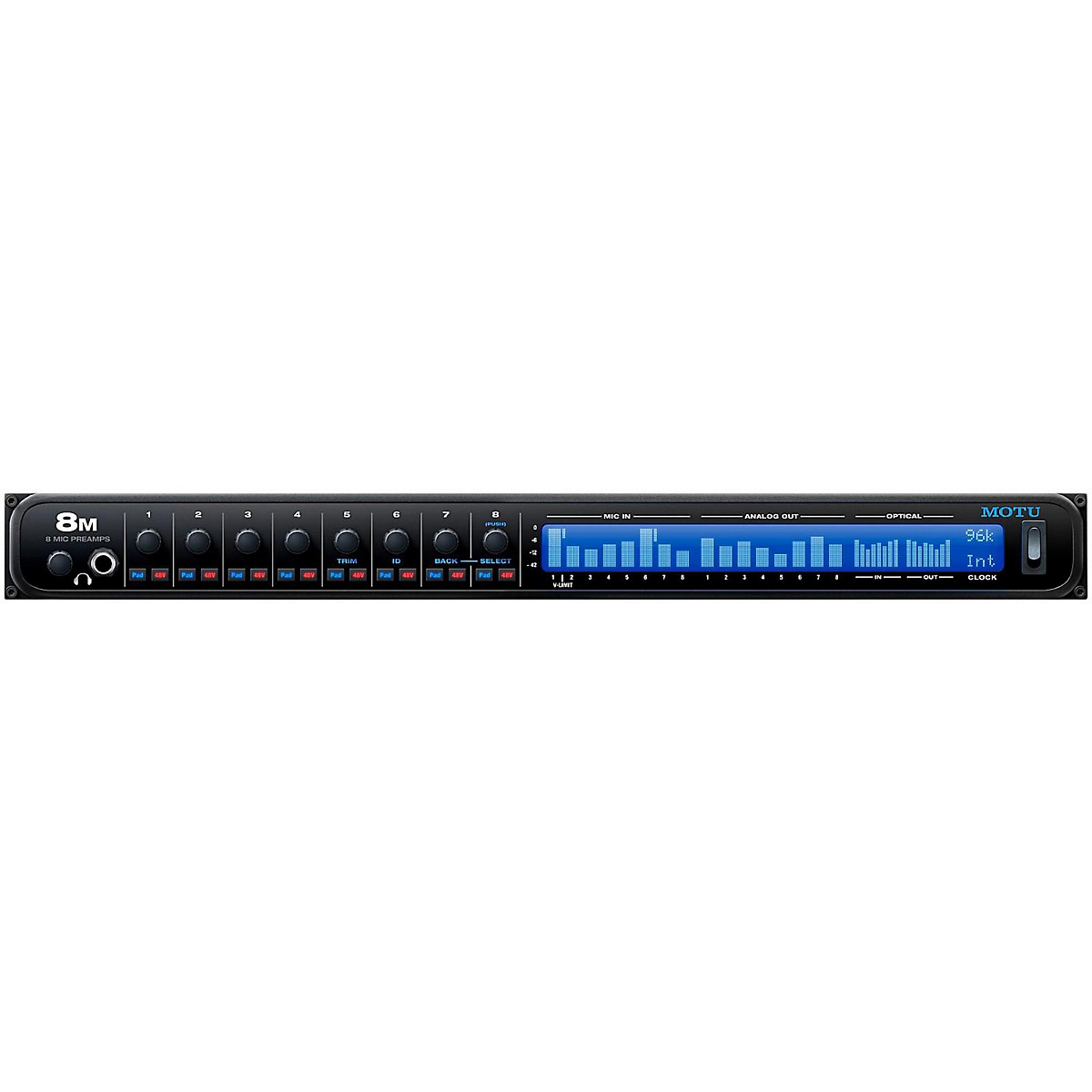 MOTU interfaces can be found in studios around the world because of their superb performance record and trusted reliability. The 8M is one of several next-generation, high-performance audio interfaces, combining incredible audio, large console style mixing, and state-of-the-art features.Eight pristine mic inputs with individual preamps - These mic ...  Click To Read More About This Product

MOTU interfaces can be found in studios around the world because of their superb performance record and trusted reliability. The 8M is one of several next-generation, high-performance audio interfaces, combining incredible audio, large console style mixing, and state-of-the-art features.

Eight pristine mic inputs with individual preamps - These mic inputs are packed with extras
The eight mic/guitar inputs are equipped with pristine, transparent preamps and offer individually adjustable 48V phantom power and -20dB pad. Preamp gain can be adjusted directly on the front panel, or from the web app control software running on your computer, tablet or smart phone. Mic inputs can be operated individually or in stereo pairs, as needed.

Precision trim - Digitally controlled preamp gain
You get the best of both worlds: analog preamp gain with digital precision and control. The 8M preamps provide 53dB of gain, which you can adjust in 1dB increments using detented digital rotary encoders. As you turn the encoder, you see long-throw graphic feedback and input metering in the LCD. You can also control all preamp settings - gain, pad and 48V phantom power switch - from the web app running on your Mac, iPad, iPhone or other wireless device. You can even save preamp configurations on your computer for future recall.

Ultra-low I/O latency - State-of-the-art latency performance
Every digital audio workflow has some latency. The only question is, how much? In the case of the 8M, the answer is, not much at all. In the 8M, latency is measured in a handful of samples, from the time an audio signal first goes digital to its arrival somewhere else (to an output the mixer, or the computer). By keeping latency this low in the hardware, the 8M helps minimize latency introduced by your software.

Thunderbolt technology - Plug-and-play ease with massive bandwidth
Thunderbolt lets you connect displays, hard drives, and other peripherals to your computer, along with the8M, and the Thunderbolt bus won't even break a sweat. But more importantly, Thunderbolt gives you an astonishing 256 channels of computer I/O (128 in and out). You can use them to route audio to the physical inputs and outputs on the 8M, plus the 48-channel mixer inside the 8M, plus audio network streams. The 8M is one of the first and only interfaces to combine Thunderbolt I/O connectivity with AVB audio networking.

Audio class compliant USB 2.0 - Broad compatibility with future-proof connectivity
Don't have a Thunderbolt-equipped computer yet? Hi-speed USB 2.0 provides across -the-board compatibility with pretty much all laptops and desktop computers. The 8M is USB audio class compliant, which means you enjoy OS-level USB compatibility and support, including iPad support (works with camera connection kit, sold separately). Since USB 2.0 devices are compatible with USB 3.0-equipped hosts, your 8M interface is a future-proof investment in your studio.

48-channel digital mixing - Control up to 12 separate stereo mixes
The 8M is equipped with a 48-channel digital mixer designed just like a large format mixing console. The 48 inputs can take signal from anywhere; the physical inputs on the 8M interface itself, audio channels from host software on your computer, audio network streams, or even mixer outputs. The mixer provides 7 stereo aux busses, 3 groups, a reverb bus that can alternately serve as a 4th group, a Main Mix bus and a separate Monitor bus that can serve as a solo bus. In essence: capable and transparent mixing.

Matrix routing and splitting - Put the ultimate patch-bay at your fingertips
With one click on the 8M ˜s routing grid, you can route any source signal to any destination. Sources can be analog or digital inputs on the interface, computer channels, mixer bus outputs, or audio network streams from other devices on the network. Destinations include interface outputs, host software inputs, mixer inputs, or any other device (or computer) on the AVB network. You can even split any single input (or stereo pair) to unlimited multiple output destinations.

System expansion and audio networking - Expand your system with more I/O and Wi-Fi control
The 8M network port introduces AVB Ethernet, the new industry standard developed by the IEEE for professional audio networking. Add a second MOTU AVB interface (1248, 8M or 16A) with a simple Cat-5e or CAT-6 Ethernet cable.

Build a network with multiple interfaces, computers, and AVB switches using standard network cabling, with ultra-low network latency, even over long cable runs (hundreds of meters). Stream hundreds of audio channels among devices and computers on the network.

Web app control - Control everything from your laptop, tablet, and smart phone
The software that you use to control the 8M doesn't' reside on your hard drive. It's a web app served from the hardware itself. This means you can control the 8M's on-board DSP, mixing, device settings, and network audio routing from the web app software running on your favorite web browser on a laptop, tablet or smart phone connected by wire or Wi-Fi to your local area network. Use any web client on any platform - Mac, Windows, Linux, iOS, Android - as long as it shares the same network.

Quick setup presets - Completely transform your MOTU interface with one click
The 8M is so flexible, it can serve many roles - in the studio, on stage, and throughout an installation. The Quick Setup menu lets you instantly reconfigure the 8M for many common situations, from operation as a standard audio interface to serving as a network "snake" from one location to another. Once a preset is chosen, you can easily customize the routing grid and mixer settings to further suit your specific needs - and then save your own custom presets.