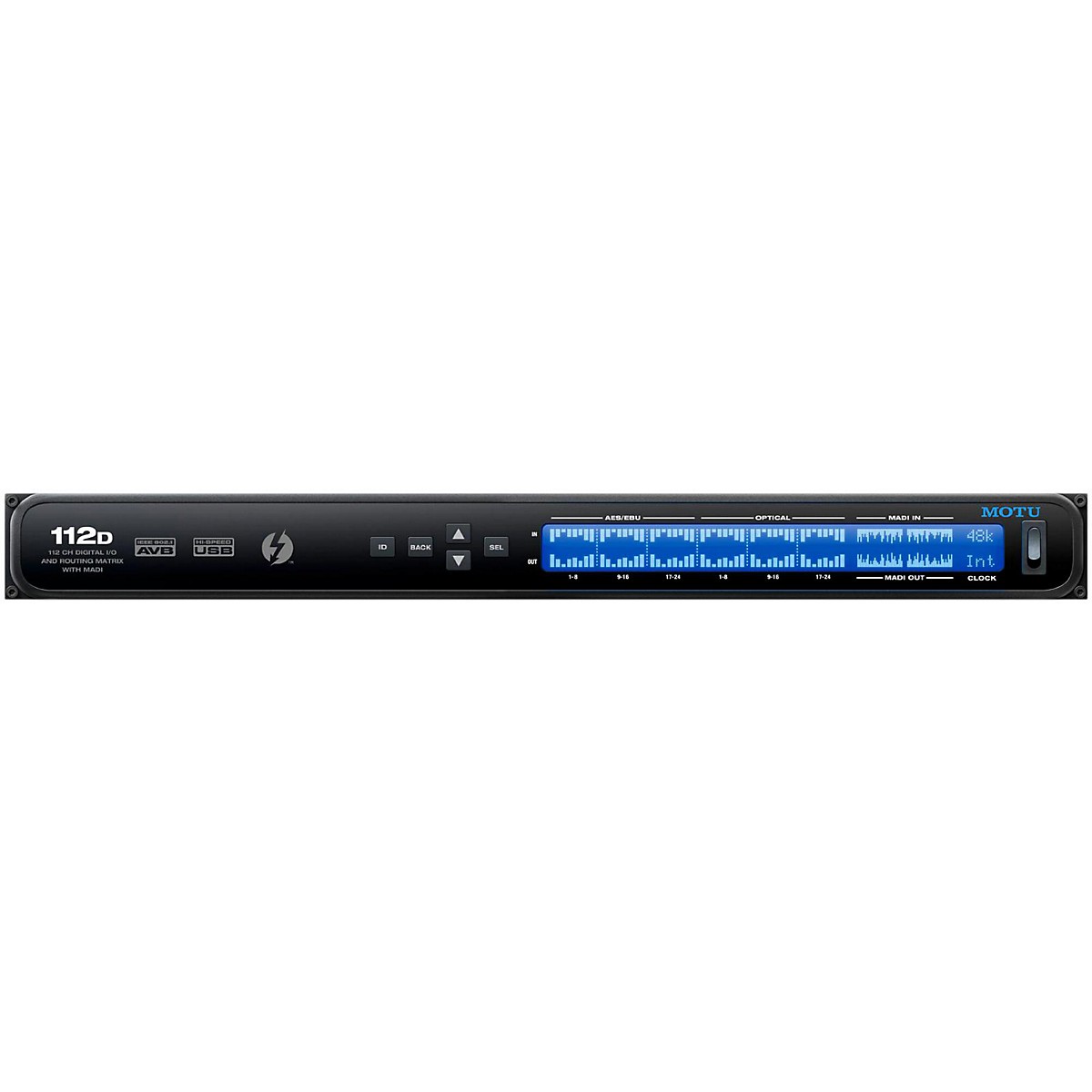 The MOTU 112D is a flexible digital audio interface, router, format converter, and stand-alone mixer with connectivity to your computer through ultra-fast Thunderbolt technology, AVB Ethernet, or class-compliant, high-speed USB 2.0 (also compatible with USB 3.0 and iOS).112 Channels of Simultaneous Digital Audio I/OThe 112D provides 24 channels of ...  Click To Read More About This Product

The MOTU 112D is a flexible digital audio interface, router, format converter, and stand-alone mixer with connectivity to your computer through ultra-fast Thunderbolt technology, AVB Ethernet, or class-compliant, high-speed USB 2.0 (also compatible with USB 3.0 and iOS).

64 Channels of MADI
The 112D serves as a flexible 64-channel MADI interface, router and converter with near-zero latency and flexible outing/splitting to and from the AVB network, computer, AES/EBU and optical formats. The 112D supports both 64-cahnnel and 56-channel MADI at 1x sample rates, along with 32 channels at 2x and 16 channels at 4x.

Ultra-low I/O Latency
Every digital audio workstation has some form of latency. The only question is, how much? In the case of the 112D, the answer is, not much at all. In the 112D, latency is measured in a handful of samples, from the time an audio signal first arrives at an input to its arrival somewhere else (an output, the mixer, the network or the computer). By keeping latency this low in the hardware, the 112D helps minimizer latency introduced by your host software.

Thunderbolt Technology
Thunderbolt lets you connect displays, hard drives, and other peripherals to your computer, along with the 112D, and the Thunderbolt bus won™t even break a sweat. But more importantly, Thunderbolt gives you an astonishing 256 channels of computer I/O (128 in and out). You can use them to route audio to the physical inputs and outputs on the 112D, plus the 48-channel mixer inside the 112D, plus audio network streams. The 112D is one of the first interfaces to combine Thunderbolt I/O connectivity with MADI and AVB audio networking.

48-Channel Digital Mixing
The 112D is equipped with a 48-channel digital mixer designed just like a large format mixing console. The 48 inputs can take signal form anywhere: the physical inputs on the 112D interface itself, audio channels from host software on your computer, audio network streams, or even mixer outputs. The mixer provides 7 stereo aux busses, 3 groups, a reverb bus that can alternately serve as a 4th group, a Main Mix bus and a separate Monitor bus that can serve as a solo bus. In essence: capable and transparent mixing.

Web App Control
The software that you use to control the 112D doesn™t reside on your hard drive. It' a web app served from the hardware itself. This means you can control the 112D' on-board DSP, mixing, device settings, and network audio routing from the web app software running in your favorite web browser on a laptop, tablet, or smartphone connected by wire or Wi-Fi to your local area network. Use any web client on any platform including Mac, Windows, Linus, iOS, and Android as long as it shares the same network.