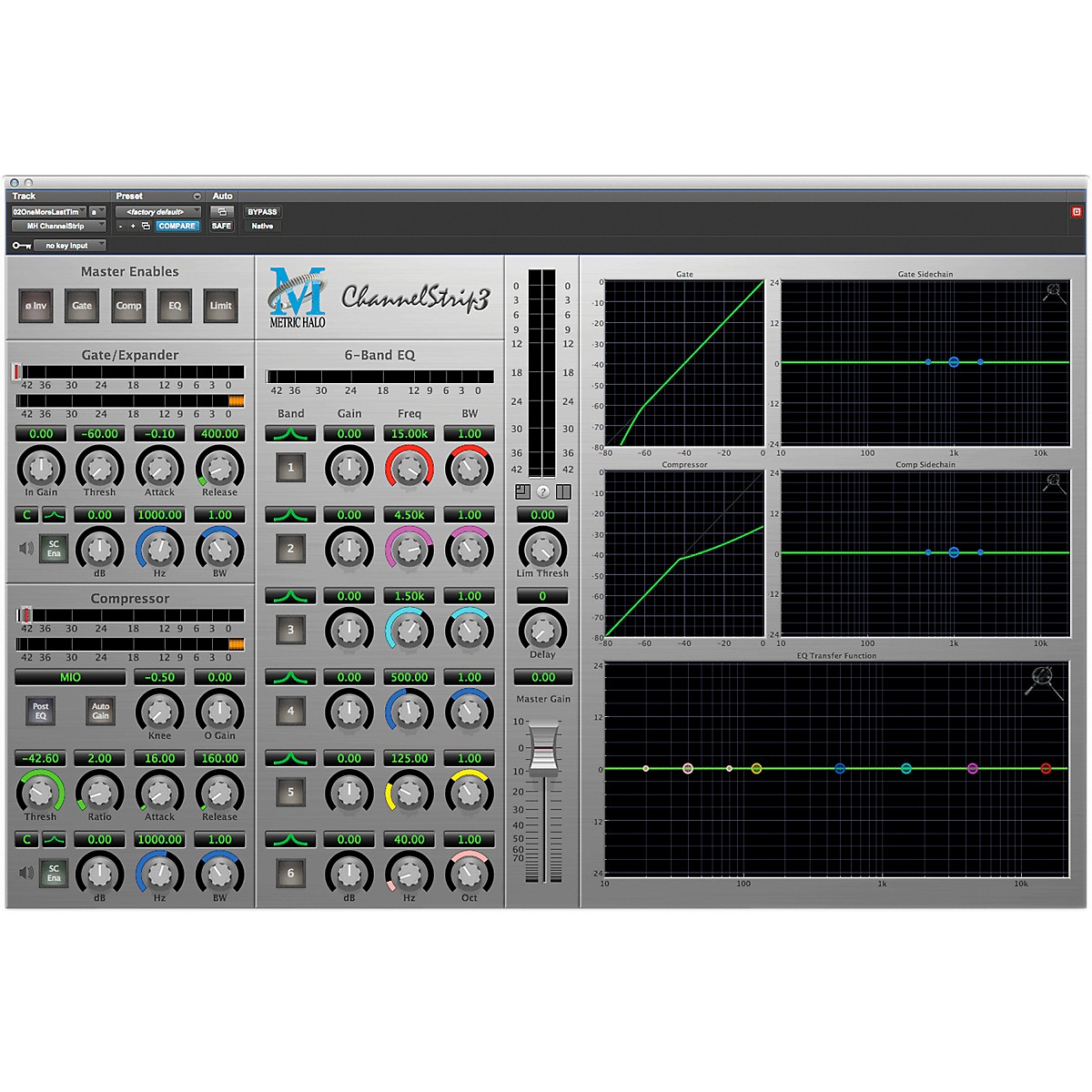 It all started with started with ChannelStrip 2; a plug-in that's been used on countless hits and soundtracks with a fourteen year pedigree. Now Metric Halo makes it even better, incorporating user feedback they're proud to release ChannelStrip 3 for Pro Tools 10 and 11 for Macintosh and Windows, as well as Mac Audio Units. The Channel Strip 3 is a...  Click To Read More About This Product

It all started with started with ChannelStrip 2; a plug-in that's been used on countless hits and soundtracks with a fourteen year pedigree. Now Metric Halo makes it even better, incorporating user feedback they're proud to release ChannelStrip 3 for Pro Tools 10 and 11 for Macintosh and Windows, as well as Mac Audio Units. The Channel Strip 3 is an all-in-one sound processing software tool with a built-in gate/expander, compressor and EQ.

All about time alignment
Sound travels through air, and it travels at a specific speed, known as the "speed of sound" (about 346.65 meters/sec or 1137 feet/second). This speed actually changes with temperature and pressure, but not by a lot.

Since the speed of sound is a bit higher than 1000 ft/sec, the converse relationship is also true - for every foot sound has to travel through air, it will take a bit less than a millisecond for it to transverse the distance. This is a great "rule of thumb" to have in your head. If you need to figure things out more precisely, you can use a tool like SpectraFoo to measure the delay time.

When there is enough of a delay between two copies of a sound, it sounds like an echo. If the delay gets shorter the echo turns into a flam. If the delay gets shorter still, the sounds merge and it is no longer a delay, but a filter. This type of filter is characterized by a series of notches, and it makes the signal sound (and feel) hollow. This kind of filter is generally known as "comb" filter because the frequency response looks a bit like a hair comb.

The dreaded comb filter
You have probably heard this kind of filter in action - usually inadvertently. It crops up any time a microphone hears the same sound along two different paths. A good example of this is if someone is giving a lecture and speaking at a lectern. Usually the sound reinforcement system will have a gooseneck mic above the lectern. When the speech leaves the speaker's mouth, it goes directly to microphone, but it also goes towards the lectern. It reflects off the hard surface of the lectern and then heads to the microphone. The sound that the reflected sound travels is longer than the direct path. So, the extra path length introduces a (short) delay relative to the direct signal. The total sound heard by the microphone has a comb filter.

All about expansion and gating
Expansion and gating are forms of dynamics control. Dynamics control is the process of automatically adjusting the volume control on an audio channel. The gain level of the channel is automatically adjusted by the process based upon the level of the audio signal passing through the processes detector. An expander is a dynamics control processor that lowers the volume of the signal when the overall level of the signal decreases. As a result, it tends to expand the dynamic range of the signal. A gate is a closely related process that essentially "cuts off" the incoming signal when the level drops below a predetermined level.

The question is, why would you want to make soft sounds softer? Well, it is often the case that the sound you want to record is contaminated by (sometimes much) lower level sounds from interfering sources. This can be bleed from other instruments when you are recording multiple instruments at once with multiple microphones. It could be background noise, like room noise or air handler noise. Or, it could be electrical interference like buzz or hum. If the recording environment is well constucted, none of these problems will arise, but often the recording environment is not ideal.

Most of the various applications can be accomplished by adjusting the parameters of the compressor; some applications depend on how the compressor is implemented. Depending on the compressor's implementation, it may not be possible to actually achieve all modes of operation by adjusting the parameters. For example, many compressors (including the one in ChannelStrip) are not terribly effective as limiters; the limiting process may require a different approach to computing and applying the gain than a specific compressor provides.

All about equalization
In order to understand equalization, you first need to understand the nature of sound. As you may know, sound is a pressure wave that (usually) travels through air. Sound causes the pressure of air to vary about the standard one atmosphere of pressure. The variation of the pressure of the air causes the tympanic membrane in your ear to move, which transmits the movements into your inner ear. Your inner ear has a sophisticated spectrum analyzer that more or less breaks down the sound into its component frequencies. Because this is our fundamental mechanism for perceiving sound everything about the our perception of sound can be understood in terms of the frequencies of harmonic waves.

Because of the nature of the spectrum analyzer in our ears, what we perceive as pitch or tone (at least to a first approximation) maps directly to the frequency of pure sine waves. The frequency of a wave is simply the rate at which it repeats. A pure sine wave is a wave that only has one component pitch, and no overtones. All possible waveshapes can be created by combining multiple (perhaps an infinite number) sine waves with different amplitudes and phases. Most musical waves (and to a lesser extent speech) are composed of harmonic waves - waves composed of a definite fundamental tone and partial overtones that are integer multiples of the fundamental pitch (these are called harmonics). The timber of the sound is controlled by the relative levels of the overtones.